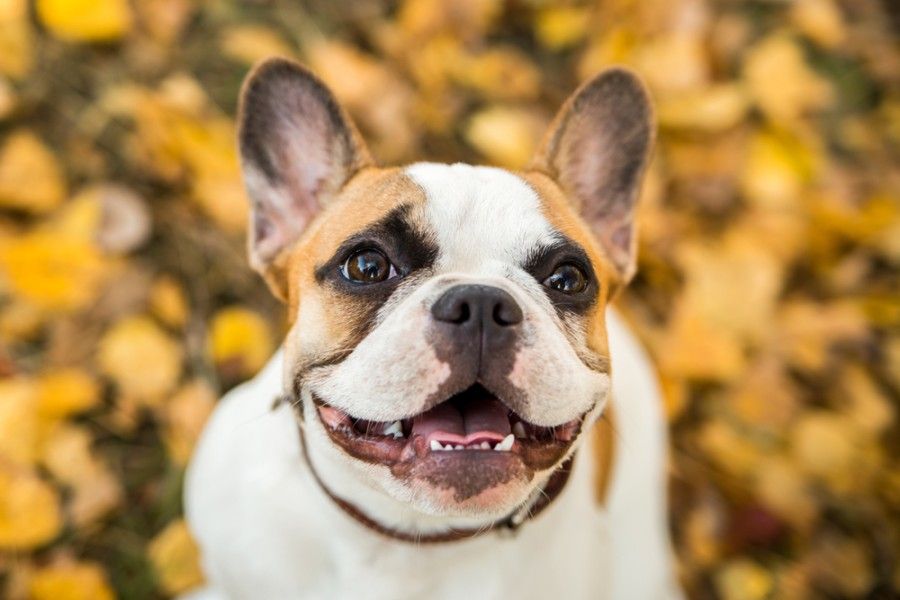 The French Bulldog was bred as a companion breed and that’s what they excel at. They aren’t working dogs, they don’t hunt, they just provide you with constant, unwavering companionship. If you’re looking for a dog to accompany you on long hikes, jogs, or other activity bouts, then you’ll want to look at other breeds. But if you want a partner to lay on the couch with you and keep the other side of the bed warm, then a French Bulldog may be the perfect fit for you.

These dogs are easy-going and low-key, but they can be very demanding. They’ll demand your affection and attention all the time. This is why they’re best-suited for individuals instead of families. Their need for your attention is so great that they’ll compete with the other family members to get it.

French Bulldogs are brachycephalic, which means they have short, wide faces. This causes them to drool excessively, as well as causing lots of snorting. Luckily, they aren’t very loud dogs and your Frenchie won’t bark often. They generally only bark when they get excited; a trait that helps make them excellent apartment dogs.

French Bulldog Puppies – Before You Get One…

Bulldogs are thick with short bodies. Similarly, their legs and neck are also very short. They’re also covered in muscle making them stocky and strong, but also making them quite heavy. When you combine all these traits, the result is a dog that acts just like a rock once they hit the water. French Bulldogs can’t swim because of the way they’re built, so they pretty much drop to the bottom when they try. If you do want your pup in the water with you, check out a doggie life vest.

As mentioned earlier, French Bulldogs are a brachycephalic breed, which means they have short, squished faces. While this might contribute to their overall cuteness, it also creates breathing problems in a lot of dogs. These same breathing problems have caused several dogs to die during flight before. As a result, most airlines have banned all brachycephalic breeds from flying, including French Bulldogs.

Many people find the short, squished faces of the French Bulldog that are covered in their trademark folds and rolls to be exceptionally adorable. While they are irresistibly cute, they’re also a breeding ground for bacteria. Those folds can hold onto debris, dirt, and moisture, allowing bacteria to grow and multiply. You’ll need to carefully clean those folds as a part of your Frenchie’s regular care routine.

Temperament & Intelligence of the French Bulldog 🧠

French Bulldogs were bred as companion pets and that’s precisely what they are. They are loving and affectionate companions that want your attention all the time. Frenchies want to accompany you everywhere and they want to be the center of your attention most of the time. When there are other people vying for your attention, your Frenchie will likely become jealous and may even try to wrestle your attention away.

Contributing to their status as excellent companions, French Bulldogs are also very intelligent. This makes them easy to train when paired with their strong desire to please their owner. They can easily understand what you’re asking of them since they’re so smart, and because they want to please you, they’ll likely do whatever is asked.

An endearing trait of the French Bulldog is their love of play. They have comical antics that they’ll display often while playing and are quick to jump at any opportunity to play with you. But when they’re not playing, Frenchies prefer to lay around lazily. They’ll happily cuddle up with you for several hours straight while you watch a movie or read.

Are French Bulldogs Good for Families? 🏡

French Bulldogs are loving and affectionate companions but they’re not a great choice for families. They’re much better suited for individuals because of their demand for attention. This can lead to them competing with other family members and developing strong jealousy issues. If this is allowed to persist, it can evolve into aggression towards other family members.

Do French Bulldogs Get Along with Other Pets? 🐶 😽

Similarly, Frenchies are best off as the only pets in the household. They can easily become aggressive towards other pets when jealousy strikes and they feel that they have to compete for your attention. Frenchies don’t want to share you at all; not with other people, not with other pets.

Things to Know When Owning a French Bulldog

Frenchies are small dogs and do best on dog food that’s specifically formulated for small breeds. They’re also low-energy dogs that don’t need or want much physical activity. This means that they don’t require as much food as other dogs of a similar size.

However, they are a breed that tends to eat past the point of being full, which makes it easy for them to gain weight. If you offer too much food to your Frenchie, they’ll probably end up being overweight relatively quickly. Be sure to monitor how much food you’re providing to avoid your Frenchie becoming overweight and possibly even obese.

Because French Bulldogs are pretty low-energy dogs compared to many other breeds, they don’t require much exercise. 20 minutes of exercise each day is plenty for a Frenchie, so they’re perfect for people who aren’t too fond of exercise. Two short walks, one in the morning and one in the evening, should be adequate exercise for your Frenchie.

Luckily, their low need for exercise also helps make Frenchies great apartment dogs. They don’t need a yard to roam around in since they’d prefer to lounge lazily inside anyway.

Intelligent dogs with a desire to please their owners, French Bulldogs can be easy to train, but they aren’t always. Some of them have a stubborn streak that makes them difficult to deal with. If your Frenchie is stubborn and independent, it’s going to make them more difficult to train.

Still, it can be done. With plenty of positive reinforcement, you should be able to train any French Bulldog. You just have to be patient enough to outlast their stubbornness.

There is one special care item that you need to perform regularly with Frenchies. You’ll need to clean their face folds. These flaps of skin can trap moisture and dirt, allowing bacteria to fester and grow. This can lead to odors and infections if allowed to persist. A simple cleaning with a damp cloth and taking a bit of care to dry the folds down afterward can easily prevent any infections.

One unfortunate problem for many pure breeds is that they face a large number of common health concerns. French Bulldogs are no different. There are quite a few health problems that often arise in this breed. If you’ve got a Frenchie now, you’ll want to keep an eye out for the following possible health issues.

As with many breeds of canine, the male French Bulldogs tend to be a bit bigger than females. Males can reach weights of 28 pounds while females top out around 24. But the biggest differences between the sexes are temperamental.

Male Frenchies tend to be extremely playful. They want to play all the time and they’re often very rambunctious. Males are also more assertive with their attitudes and more demanding with their affection.

Females are more affectionate overall, though. They’re also a bit timid, especially around strangers. Females can still be playful, though they’re not usually as high-strung or demanding with their mannerisms.

French Bulldogs make excellent companions for individuals. They were bred long ago as companion pets and they still excel as such today. They’re the perfect partners for anyone who wants an all-the-time pet. But remember, these are jealous dogs that want all your attention for themselves. They don’t want to share you with other people or pets and might try to fight for your attention if they feel neglected, even for a moment.

Because of this, French Bulldogs aren’t great for families. They’re just too jealous and too demanding of attention from their person. They’re also not a great fit for very active people. Frenchies want to relax all day, cuddled up in your lap. They’re the definition of a lapdog. So, if you’re looking for a 24/7 companion to be by your side for affection and love day and night, then the French Bulldog is the perfect fit for you.