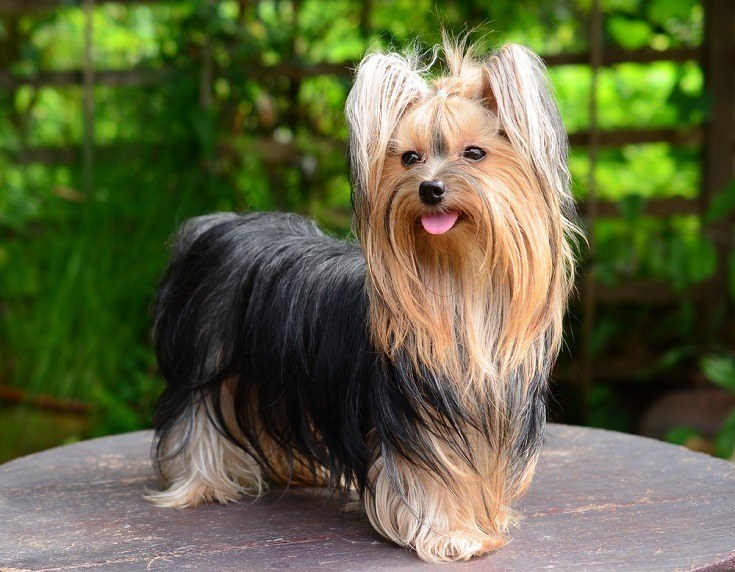 Often, when you see a dolled-up dog with a luxuriously-kept coat being carried around by a hifalutin urbanite in expensive designer clothes, that dog is a Yorkshire Terrier. More commonly called Yorkies, these dogs are the royalty of the canine world, a status symbol of aristocrats in the Victorian era and a top contender in dog shows today. According to the AKC, they’re one of the fifteen most popular breeds in America1, and it’s not hard to see why.

Aside from their elegant, adorable looks, these dogs have giant personalities stuffed into their tiny, toy bodies, and that’s the real reason why everyone loves them. These are bold dogs, brave and courageous, self-assured to the end, with a spunky fire that makes them just as entertaining as they are lovable.

Yorkshire Terrier Puppies – Before You Get One…

These are some tiny dogs, never cresting 7 pounds according to the breed standard. They stand a mere seven to eight inches in height, but their personalities make it clear that they are completely unaware of their small stature. But this small size carries some benefits for Yorkie owners. These dogs are extremely adaptable and can be happy in many living arrangements, including small apartments and homes with no yards.

1. Their coats are similar to human hair.

If you’ve ever seen a Yorkie done up for a dog show, it’s pretty hard to miss those long, luscious locks of hair that cascade down to the floor. Look close enough and you’ll begin to notice that their hair looks pretty similar to our own. That’s because their coat is actually closer to human hair than animal fur. This makes it very low-allergen, great for people who are usually susceptible to dog-related allergies. It also means they don’t shed much, though they will need regular trimming and grooming to keep their coats from becoming unruly.

2. They were bred for hunting rats in underground tunnels.

Though most Yorkies today are living pampered lives in the homes of wealthy city dwellers, the breed’s beginnings are much humbler. Remember, Terriers are hunting dogs, and the Yorkshire Terrier is no exception. Originally, these tenacious little canines were used in underground tunnels to catch rats and other vermin. You’ll still notice the prey drive in these dogs today. Just pull out a stuffed mouse and watch your Yorkie go crazy tearing it apart. Today, these dogs can perform AKC Earthdog tests, allowing them to try their hand at hunting underground rodents.

In WWII, an unlikely hero saved the lives of many soldiers. That hero was a tiny Yorkie named Smoky. This dog dragged a communications cable through a drainage culvert that was a total of 60 feet in length and just eight inches wide. After the incident, Smoky went around the hospitals visiting wounded soldiers, quite possibly making Smoky the very first therapy dog. Smoky’s tale has been immortalized in the book Yorkie Doodle Dandy, and through seven memorials honoring his legacy, including one in Australia and one in the AKC’s Museum of the Dog.

Temperament & Intelligence of the Yorkshire Terrier🧠

Yorkshire Terriers are dogs that epitomize the “big dog trapped in a small body” syndrome. They seem to have no idea of their small size, and they make this clear with their big, bold personalities. These dogs are courageous and tenacious, rarely afraid of anything. This is part of what makes them great city dogs. All of the sounds and unexpected bustle of the city doesn’t faze them.

On the other hand, this trait can also get these little dogs into a lot of trouble. Given the opportunity, Yorkies will pick fights with dogs that are many times their size! You’ll need to keep an eye on your Yorkie to ensure this doesn’t happen. They have a tendency to be assertive and sometimes even aggressive towards other pets.

These are spunky dogs that love to play around. They’re also incredibly loving, and many of them are happy to spend the day curled up in your lap. But they can also be very curious, looking for ways to keep their mind engaged and alleviate boredom.

Because of this, many Yorkies are quite mischievous. It’s not uncommon for these dogs to get themselves into trouble. They also don’t always like to listen because of the stubborn, independent streak they’re known to have.

Yorkies are very smart dogs and can pick up on things easily. Because of this, you’ll have to be careful of how your Yorkie perceives your actions. If you’re too overprotective of your Yorkie, they might lose that natural courageousness and become neurotic instead.

Yorkies are generally considered to be great family pets. They can form close bonds with each family member, and they love the attention of multiple people. These dogs want lots of attention and affection, so the more the merrier is generally the rule with these little terriers.

Yorkies do also get along very well with kids, though they generally do better with children that are a bit older instead of young kids. Younger kids will often be loud or somewhat aggressive with a tiny dog like a Yorkie, and this can be more than the dog can handle.

However, these dogs do great with older kids who understand how to behave with a dog. As long as the kids aren’t too rough and they’re not overly-excitable, they should do well with a Yorkie.

If you want your Yorkie to get along well with other pets, socialization will be key. Keep in mind, these dogs were originally bred and used as hunting dogs. That strong prey drive that made them great rodent hunters still exists in the breed today. Because of this, you’ll have to be careful when introducing your Yorkie to other small pets.

With larger pets, Yorkies can often display their too-big personalities and act assertively or aggressively. This can get them into trouble, but it can also be cured with regular socialization starting when the puppy is young.

As long as you introduce your Yorkie to lots of different people and pets frequently, they should learn to get along with everyone.

Things to Know When Owning a Yorkshire Terrier:

Yorkshire Terriers are tiny dogs that weigh a mere seven pounds or less. As such, they don’t need much food. You’ll need to pay close attention to how much you feed your Yorkie to avoid overfeeding them, which is much easier to do than you may imagine.

Because of their small size, it’s easy for Yorkies to overeat, which will lead to weight gain pretty quickly. Once this starts, it’s a difficult cycle to stop and your Yorkie could end up overweight and even obese pretty quickly.

These dogs do best on a small-breed-specific dog food blend. You’ll want to find one that’s high quality and made with healthy, whole-food ingredients that will offer your Yorkie the nutrients it needs to live a long, healthy life.

Yorkies are quite high maintenance when it comes to their appearance, but they don’t need much in regards to physical activity. In fact, you might not need to offer your Yorkie much at all in the way of exercise. Taking your Yorkshire Terrier on one or two short walks a day is plenty of exercise for this breed. Most of them can even get sufficient exercise from a simple play session inside.

For Yorkies, training is essential. They might be stubborn about training though, so you’ll need to be calm, confident, and firm when training a Yorkie. Luckily, they do want to please their owner, so with the right touch and some positive reinforcement, getting your Yorkie to follow your commands shouldn’t be too hard.

Thankfully, Yorkies are smart dogs, so they can easily understand what you’re asking and how to perform the requested action. They even excel at dog sports and shows, where following commands perfectly is a requisite.

This is where Yorkies are going to require some time and attention. Their coats are closer to human hair than animal fur, and they’re constantly growing. You’ll need to regularly trim their coat to ensure it doesn’t just continue to grow until it impedes their ability to move.

But trimming isn’t all this coat requires. You’ll also need to brush it daily. The longer the hair, the more brushing that will be required. Those long locks will tangle and mat very easily, so you’ll need to remove the loose and dead hairs daily while ensuring that the hair stays tangle-free.

Even if you keep your Yorkie’s coat cut short, you’ll still need to brush it daily or it will get dirty and matted.

Yorkies are also prone to dental problems like many other small breeds. They form a lot of tartar and can even lose their teeth at a young age. To avoid this, make sure you brush your Yorkie’s teeth regularly and keep them clean. Also, get a professional cleaning of your Yorkie’s teeth by the vet at least once each year.

One of the biggest problems with purebred dogs is that they’re susceptible to a wide variety of health concerns. Unfortunately, the Yorkshire Terrier is no exception. If you’re going to raise one of these dogs, you’ll want to keep an eye out for the following conditions.

Many people believe that female Yorkies are sweeter and more affectionate than males, but that’s far from the truth. In reality, males are just as loving, attentive, and affectionate as their female counterparts. However, males may wait for you to give your attention to them while females are more likely to demand your attention when they want it.

Though they may have started out hunting vermin in underground tunnels, most Yorkies today live pampered lives as beloved companion pets. These dogs are lovable, affectionate, bold, and make excellent partners. Completely unaware of their small size, these courageous dogs are likely to pick fights with larger dogs given the chance.

Not surprisingly, Yorkies have a bit of an independent streak that you’ll need to train out. Luckily, they’re smart dogs that can learn quickly, so with a little persistence and positive reinforcement, you should be able to train your Yorkie to be a well-behaved canine that can accompany you everywhere; one advantage to their tiny stature.

9 Types of Mountain Dog Breeds & Their Differences (with Pictures)