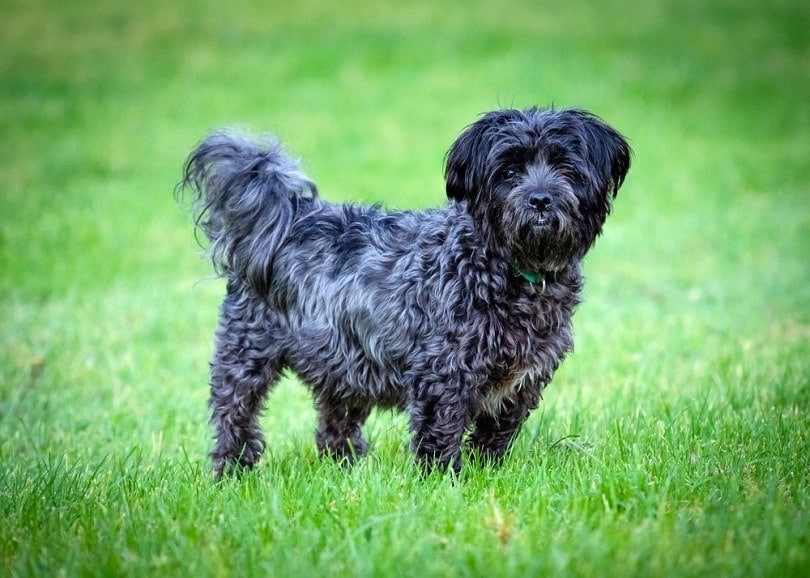 The Affenpinscher and Bichon Frise mix, or Affenchon as the American Canine Hybrid Club1 calls this pup, is a positive spitfire. He is a bundle of energy with a cheerful disposition that makes him a joy to welcome into your home. Like many small breeds, this pooch hasn’t received the memo that he’s little. He acts and plays like a dog twice or three times his size.

The Affenchon brings together the clownish behavior of the Affenpinscher with the friendliness of the Bichon Frise. The former started life as a working dog, hunting rats and other pests on farms and in stables. The latter endeared himself to sailors and later made his way to the parlors of the wealthy and nobility. That explains the personality of this mix.

His size is right for anyone looking for a small dog with a lot of spunk. You won’t have a dull day again with an Affenchon in your home. Both parent breeds are playful without being too intense. He can adapt well to apartment living as long as he gets enough exercise to expend some of his energy.

Affenpinscher & Bichon Frise Mix Puppies – Before You Get One

The differences between the parent breeds make it hard to generalize the Affenchon. However, there are several shared traits that can give you an idea about what you can expect. This pup loves people. It’s evident in his happy attitude and eagerness to please. The downside is that he is also prone to separation anxiety. Therefore, he needs a home where he can get a lot of attention.

The Terrier in the Affenchon comes through in the pup’s tendency to nip. It’s a bad habit that you must correct early. The same advice applies to barking. This pooch is intelligent, so you must provide mental stimulation to keep him from getting bored. If he isn’t given something to do, he’ll find something to entertain him.

1. The Affenpinscher and Miniature Schnauzer are related.

If you think the Affenpinscher and Miniature Schnauzer look alike, you’d be right. Crossbreeding with several other related dogs, including the Pug, resulted in a rough-coated pup that many historians believe is the modern-day Schnauzer. That could explain the tenaciousness of both pups.

2. The Bichon Frise descended from the Barbet.

To look at the Barbet, it’s hard to believe that the Bichon Frise is related. However, it’s another example of selective breeding. Other closely related dogs include the Maltese, Havanese, and Bolognese. It’s easy to spot the resemblance between the four breeds.

3. The Affenpinscher began life as a Ratter.

Life as a ratter is something people usually associate with Terriers. That was—and is—the job of many of these dogs. The Affenpinscher is an anomaly because his purpose was similar. His name in German means “monkey-like terrier.”

There’s no denying how cute the Affenchon is. His wiry coat and flat face make him look even more precious. We called the Affenpinscher a Terrier wannabee for a reason. It comes through in all aspects of owning an Affenchon. The history of the parent breeds also speaks to his intelligence and independence. Hunting dogs are excellent problem solvers that often take charge and follow their drummer.

However, the Affenchon also has many desirable qualities that make him a decent choice, even for first-time pet owners. He is affectionate and quite loyal to his family. He is not overly vocal, but he will sound the alarm if he senses a threat.

The Affenchon can make a decent family pet. However, a lot depends on which of the parent breeds is dominant. The Bichon is kid-friendly and will play with children gladly. The Affenpinscher, on the other hand, is more of a hands-off dog. He doesn’t tolerate roughhousing or handling well, even if a child with good intentions only wants to give him a hug.

We suggest supervision during playtime with your new puppy. Look for clues in his personality. If he gets nippy when a child tries to pick him up, teach your kids to respect his space. Early socialization can prevent these issues. Take it slowly and let your pup decide what he’s willing to accept.

The fact that both parent breeds started as ratters should tell you everything you need to know about the Affenchon and other pets. The prey drive is too strong in this pup to trust him with cats or small animals. Remember that it’s instinct that drives his actions. The Affenpinscher in him is another force to reckon with because of his tenaciousness and fearlessness.

Things to Know When Owning an Affenpinscher & Bichon Frise Mix:

Some aspects of the following considerations of owning an Affenchon depend a lot on the dominant breed. As we discussed, there are some marked differences between the two. Seeing the sire, dam, and littermates, if possible, can help you gauge what to expect. Basic care is the same for either one. Both are smaller dogs with similar needs. The main differences will exist with grooming and health.

The most important thing to know about owning a small dog is that it’s imperative that he doesn’t skip a meal. These pups mature relatively rapidly, outpacing larger breeds like Labrador Retrievers. Your pet must have enough food and nutrition to support his growth rate. It’s one thing that makes foods meant for small dogs different from bigger ones. They are more energy-dense.

We recommend three or four small meals spaced evenly apart during the day. Don’t just leave it out for him to kibble. It’s essential that you monitor his intake. The reason concerns his blood sugar. If he expends too much energy with play and growing, he risks dangerous drops in these levels that can have life-threatening consequences.

It’s still essential to keep that fact in mind even with adult Affenchons. You should feed mature pups two meals a day to keep everything stable. The same precaution about making sure he eats still applies. We recommend offering your dog a high-quality food that will provide everything he needs for proper development.

The Affenchon needs more exercise than you may expect of a small breed. He does his part with his playful nature. Daily walks are an excellent way to accomplish several things. You’ll keep him active. He’ll get chances to meet new people and pets. You’ll also have the opportunity to reinforce his leash manners. This guy needs it.

The Affechnon has the mental capacity to learn and retain what you teach him. He also wants to make you happy, so he’s a willing student. He is a bit willful, which you can tame if you assert yourself as the boss, taking care not to offend his sensitive nature. Consistency is also essential to make training easier for your pup. Save treats as training aids to help him maintain a healthy weight.

The ease of grooming varies, depending on which breed is dominant. The Affenpinscher’s maintenance is easy-peasy. Brush him a couple of times a week, and you’re good to go. Make it a point to check his skin for signs of irritation or infection. The Bichon Frise is another story. This pup needs professional grooming to shape his coat and keep it white if that is his color.

Both parent breeds are healthy dogs. They don’t have a lot of glaring congenital issues. However, there are a few skeletal conditions that pre-breeding screening can reveal. Preventive health care and annual vet exams are essential. Don’t skimp on these simple ways to keep your pup fit, physically and mentally. When we speak of grooming, we are also talking about your pooch’s well-being.

Choosing a male or female Affenchon often boils down to two things. It depends on whether you want to breed your pet or you have a preference. If you don’t want to raise puppies, we recommend spaying or neutering your dog, based on the advice of your veterinarian. Timing is critical as it can affect your pup’s risk of some health conditions if done too early.

The Affenchon is an adorable pup. His feistiness and fearlessness make him endear him even more to use. We like a dog that has personality. It’s your job as a pet owner to keep the undesirable traits under control. This pooch will reward you for your efforts with boundless affection and loyalty. Even though you may have trouble finding a puppy, you will have a winner on your hands if you do.