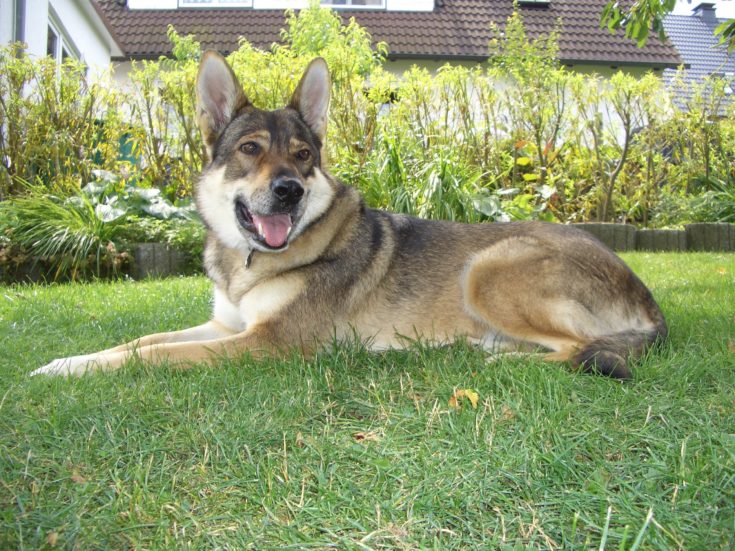 As the product of crossbreeding between the Alaskan Malamute and German Shepherd, the Alaskan Shepherd combines many of the best qualities of these famous working dogs. Owners describe them as intelligent, playful, and requiring lots of activity to live a happy and healthy life.

Though they are not recognized by the American Kennel Club as an officially sanctioned breed, this dog has enjoyed popularity in the United States since the early 1900s. If you’re wondering whether this hard-working dog breed might be the right pet for you, read on to discover everything you’ll need to know – from buying Alaskan Shepherd puppies, to their temperament, dietary requirements, and more.

Alaskan Shepherd Puppies – Before You Buy…

To understand whether an Alaskan Shepherd dog might be the right pet for you, it’s useful to consider the characteristics and behaviors of its two parent breeds. Let’s take a closer look at the Alaskan Malamute and German Shepherd in turn, before discussing the attributes unique to this crossbreed dog.

Alaskan Malamutes are speculated to have descended from wolves and may have accompanied hunters on their travels as far back as 4,000 years ago. Named after the Mahlemuts Indian tribe, they have long been bred for pulling sleds and assisting in big game hunts. As the official state dog of Alaska, this AKC-recognized breed has gained large fame across much of the northern and central United States.

As you might expect, German Shepherds originally hail from Germany. Developed through intensive crossbreeding of native shepherding dogs in the early 1800s, they were bred specifically to herd sheep. Renowned for their responsiveness and naturally well-behaved temperaments, they soon became a popular option for working dogs in every profession — even the German military. First recognized by the AKC in 1908, they are an incredibly popular dog breed in the United States.

By combining the best attributes of two different hard-working, well-behaved dogs, the Alaskan Shepherd offers an ideal blend of companionship and protection that’s great for families and single owners alike. They’ll need plenty of hands-on training when they are young, so be prepared to invest significant time into your relationship should you decide to get one as a pet.

1. Their ancestors may have crossed the Bering Strait.

As far back as 4,000 years ago, it is speculated that Paleo-Indian tribes migrated from Asia to North America via a land bridge that was only passable due to lower ocean levels. DNA evidence suggests that the Alaskan Malamute that forms part of the Alaskan Shepherd’s heritage is descended from the earliest dogs to have reached North America via this land bridge.

2. The Alaskan Shepherd dog may have been the first “designer dog breed” in America.

While the Labradoodle (Labrador and Poodle) mix may have been the first breed to be called a “designer dog” in the 1970s, both the Alaskan Malamute and German Shepherd were widely bred in the early 1900s. It’s impossible to verify with absolute certainty, but there is a definite possibility that Alaskan Shepherds were some of the first designer dog breeds.

3. Larger dogs of this breed can nearly double the average weight.

Uncommon amongst any dog breed, the Alaskan Shepherd has ancient genes that sometimes produce surprising results. Whereas most dogs of this breed weigh between 60 and 80 pounds, the largest examples can weigh in excess of 120 pounds!

Temperament & Intelligence of the Alaskan Shepherd

Kind, intelligent, and sociable, the Alaskan Shepherd’s temperament reflects the hard-working breeds from which it derives. Puppies of this breed can seem to have boundless energy and require substantial amounts of training to curb their constant enthusiasm and occasional recklessness. When regularly given jobs and tasks, they’ll happily fall into a convenient rhythm to match your life and energy levels.

Alaskan Shepherds excel as guard dogs, but their working instincts mean that you should pay particularly close attention when they’re around small children. While they would never intentionally harm a child — and often go to great lengths to protect them — their herding instincts can lead them to bully or boss children around without meaning to.

With proper training and discipline, the Alaskan Shepherd can be seen to get along with just about any sort of animal. As puppies, they may not be as inclined to spend time with other dogs (and especially not cats or rabbits). Once they grow older and naturally mellow out, though, they can be very sociable and welcoming dogs.

Things to Know When Owning an Alaskan Shepherd

Adopting an Alaskan Shepherd will almost certainly be a large investment of your time, money, and attention. Before you take the plunge and decide to keep one as a pet, consider the following aspects of being a responsible owner for one:

When fully grown, Alaskan Shepherds will require between two and three cups of dry dog food per day. They’re a rather large breed, so be sure that you can afford their significant monthly food costs! With many dry dog foods costing an average of $1-2 per day, a single Alaskan Shepherd can add $30 to $60 to your grocery bill each month.

Coming from the genes of two hearty, hard-working dog breeds, the Alaskan Shepherd feels a constant need for activity even into its old age. Possessed of great stores of energy and endurance, they love being taken outdoors for walks, runs, and hikes. A good baseline to shoot for is an hour per day of moderate activity, though they can easily handle more without complaint.

With their intelligent, inquisitive natures and constant desire for stimulation, Alaskan Shepherds require a significant investment of time in their training. From the time they’re a puppy until they’re old and gray, they will enjoy the mental stimulation of learning new tricks and commands. If you like a dog that you can play games with, the Alaskan Shepherd is an excellent choice!

The incredibly dense, medium-length coat of an Alaskan Shepherd is prone to heavy bouts of shedding. This is especially true in the spring and fall when they will lose one coat to prepare for the season ahead. Weekly brushings will suffice for most of the year, but this should be increased to a daily frequency during their shedding seasons.

Owing to their mixed heritage, Alaskan Shepherds are a generally healthy breed. However, they have inherited a tendency from their ancestors towards a few medical conditions, such as the following:

On average, a male Alaskan Shepherd will stand 2-3 inches taller than a female, and weigh from 10 to 20 pounds heavier as well. Males tend to be more active and require more intensive, concentrated training efforts, while females are alert but prefer to stay near their owners at almost all times.

It’s hard to find any dog breed more hard-working than the Alaskan Shepherd. Even if you’re not looking for a dog to pull your sled across the ice or aid in a wartime effort, they’re a lovable and intelligent breed that’s great with families. As long as you’re prepared to give them plenty of exercise and training, they’ll repay you in devotion and companionship as long as they live.