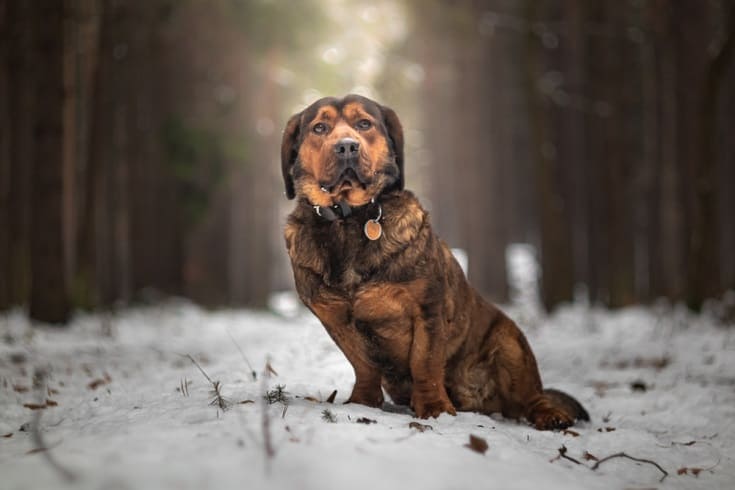 Alpine Dachsbracke Puppies – Before You Get One…

Although Bloodhounds are famed for their powerful scent tracking, Alpine Dachsbracke dogs can pick up a trail even if it has been cold for some time. Due to their origins in the harsh, mountainous lands of Austria, these small scent hounds have been bred to pick up the weakest scents- even during the coldest of winter days.

When most people see the Alpine Dachsbrackes for the first time, they assume they’re crossed with Dachshund dogs because of their short legs. Though they may have been crossed with Dachshunds at the start of creating this breed, they’re considered an established breed that simply resembles the compact look of the Dachshund.

3. The Crowned Prince of Hamburg owned an Alpine Dachsbracke.

Temperament & Intelligence of the Alpine Dachsbrake 🧠

One of the calmer scent hounds, Alpine Dachsbracke dogs are known for their friendly personalities and enjoy spending time with their families. A great pet for active individuals and families, Alpine Dachsbrackes need to have daily exercise and engagement or they’ll provide their own entertainment at your house’s expense. These dogs are curious and will follow their noses, so any food left out is fair game.

One of the less active scent hounds, Alpine Dachsbrackes still have quite a strong scent-drive. They can go from half asleep to full-on chasing in a split second, which can become a serious issue if not handled right away. A fenced-in yard is an absolute must for this breed, especially if recall with your Alpine Dachsbracke is not great. However, aside from recall issues, the Alpine Dachsbracke is a relatively easy hound to train.

These dogs enjoy affection and human interaction, though they won’t demand it as much as other breeds. They’re friendly and do well in social situations, but early socialization is important to establish this. People and dog aggression are very rare with this breed, which can’t always be said about other scent hounds. As long as their daily needs are met, Alpine Dachsbracke dogs can be a rewarding dog to have.

Are Alpine Dachsbrackes Good for Families? 🏡

Yes! These dogs are quite tolerant and enjoy playtime, so active families with responsible children will do great with this breed. It’s crucial that children are taught to handle animals safely and responsibly, with adult supervision. As long as this breed is trained properly and exercised daily, Alpine Dachsbracke dogs are a great choice for families.

Do Alpine Dachsbrackes Get Along with Other Pets? 🐶 😽

Alpine Dachsbracke dogs can get along fine with other dogs, though smaller dogs, cats, and small animals may be too tempting. Since they’re prey-driven, we don’t recommend them for households with multiple small animals. Aside from that they’ll do well in most houses with established dogs, but should be introduced slowly to prevent territorial tendencies from the other dogs.

Things to Know When Owning an Alpine Dachsbracke:

Though they’re no larger than 45 pounds, Alpine Dachsbracke dogs need a protein-packed diet to support their moderate energy levels. Along with protein, a healthy balance of carbohydrates and healthy fats is crucial for normal body functions. We recommend a diet of at least 25% crude animal-based protein and fortified with the daily requirement of minerals and vitamins. Sport Dog Food is a great option since it’s specifically formulated for tracking dogs. If you’re unsure what other options your Alpine may have, consult with your veterinarian for a more customized diet plan.

Since Alpine Dachsbracke dogs are prey-driven and have moderate exercise needs, they’ll need daily exercise and playtime to prevent boredom and anxiety disorders. At a minimum, a few long walks and an hour of playtime a day is to be expected. However, it’s less about the quantity of exercise with this breed and more about the quality of exercise. Games that involve some form of a chase like fetch or dock-jumping are great examples of how to keep your Alpine Dachsbracke happy.

These little hounds are extremely intelligent, so mental stimulation is crucial. Puzzle toys are a great way to keep them thinking, but they may figure them out relatively quickly. Tracking games are perfect for your Alpine Dachsbracke, especially because they’re bred specifically for tracking purposes. For some Dachsbrackes, tracking becomes a profession that can also be rewarding for the owners as well!

Training your Dachsbracke puppy should start from day one, including recall and housebreaking. As mentioned above, these dogs are prey-driven and should not be trusted off-leash unless recall is 100% successful. Harsh or aversive training methods are not recommended, as these dogs will balk and become resentful of their owners. Positive reinforcement training with treat-based rewards is a great start, but this breed is more about consistency than anything else. Even one day missed with training can set an Alpine back a bit, so a training schedule is essential.

We recommend hiring a professional dog trainer if you’re inexperienced with:

Alpine Dachsbracke dogs have shorthaired coats, but they’re moderate shedders. Brushing out their coats with a curry comb and finishing brush will help lessen the overall shedding while promoting normal oil production in their coats. A bath once a month is fine to reduce odors and remove debris, but overbathing can lead to skin and coat irritation. In addition to coat care, your Alpine Dachsbracke’s nails will need to be trimmed at least once every 4 weeks.

Alpine Dachsbracke dogs are known for being healthy and sturdy, especially having been bred in the harsh lands of Austria. Still, they can suffer from some common and more serious health conditions, especially with their elongated spines. It’s crucial to prepare financially for your dog’s future, since some of these conditions may need multiple treatments. Here are some of the most common health conditions of the Alpine Dachsbracke:

The choice of female versus male is mainly a preference that should be discussed with everyone involved. Except for a size difference between males and females, with males being slightly bigger and heavier, there are no distinctive differences between the two. The choice is ultimately a family decision and shouldn’t be the most important factor when purchasing an Alpine puppy.

With their unique bodies and gentle personalities, it’s genuinely surprising that Alpine Dachsbracke dogs are not as popular as other breeds. Their relatively healthy lives and moderate exercise levels compared to other working and hunting breeds make them a better choice than some of the most popular dog breeds, including Golden Retrievers and Bloodhounds. As long as they’re given daily exercise and some affection, these dogs will remain healthy and happy. If you’re looking for a hound-type of dog that is medium in size and relatively easy to train compared to other hunting dogs, the Alpine Dachsbracke can be a great household and hunting companion.