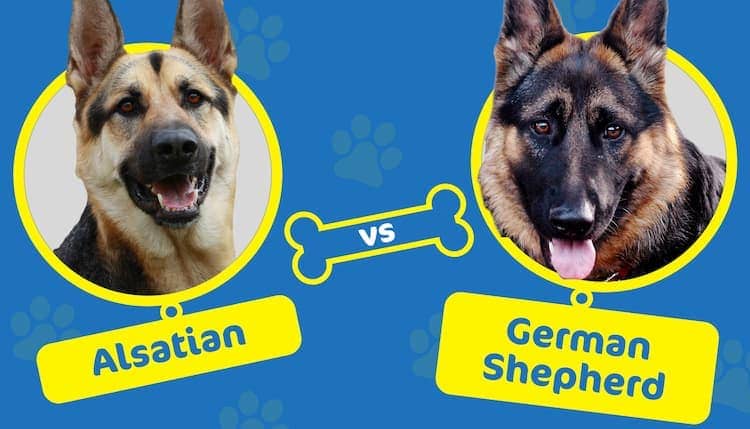 If you’ve ever had the displeasure of running into a particularly pretentious dog owner, you may have complimented them on their beautiful German Shepherd, only to be told, “Actually, it’s an Alsatian.”

What’s an Alsatian? Is that just a $5 word for German Shepherd? What’s the difference between the two breeds?

You have many questions and fortunately, we have answers, so read on to learn more.

Can you tell these dogs apart? Other than them being different dogs, they look pretty identical in breed.

You may notice that their stats are the same…keep reading to find out why!

As it turns out, an Alsatian is a German Shepherd. There’s no difference between the two breeds whatsoever. So, why do they have different names?

The answer dates back to WWI. Both the Central Powers and the Allied Powers used German Shepherds as military dogs, as they’re powerful animals that are fiercely loyal and obedient. However, the British hated calling these dogs German Shepherds because they were at war with Germany.

A different name was needed, so they came up with “Alsatian” instead. It should be noted that other Allied countries, like the United States, didn’t have any issues with the name and continued calling German Shepherds by their regular names.

Once that war (and WWII) was over, the British realized how silly they had been and went back to calling the dogs “German Shepherds.” However, the second moniker confused many people who mistakenly believed that the dogs were two different species.

German Shepherds are one of the most popular dog breeds on the planet and for good reason. They’re athletic, obedient, and energetic, and they can be equal parts fearsome and adorable. Regardless of whether you need a ruthless guard dog or a loving family pet, the German Shepherd can fit the bill.

They’re incredibly intelligent, but they’re such people-pleasers that they only use their considerable brainpower to assist humans rather than challenge them. This makes them a pleasure to train, and they’ll do virtually anything that you ask of them.

They can be prone to aggression, however, so it’s important to socialize them from an early age. If raised properly, they tend to adore people and can be excellent around kids.

While they’re extremely athletic, they can be prone to a host of health conditions, like Von Willebrand’s disease, degenerative myelopathy, and hip dysplasia. The latter condition is especially common due to their low-slung backs; they also suffer from arthritis more than many other breeds.

If you have the time and energy to spend training a German Shepherd, you’ll have the most dedicated and loyal companion imaginable. Don’t adopt one unless you’re prepared to put in the work, though, as they can quickly decide to use all that excess energy to destroy your furniture, dig up your lawn, or escape your yard entirely (presumably to wage war on the British).

As noted above, they’re the exact same dog, so you should pay the exact same price. However, we wouldn’t put it past certain breeders to try to milk a few extra bucks out of unsuspecting customers by using the more pretentious “Alsatian” name.

Regardless of what you call them, these dogs can be the most expensive breed on the planet at the high end. In fact, one German Shepherd sold for $230,000 to a Minnesota businessperson, so you’d better save your nickels and dimes if you plan on buying one of these elite dogs. That specific dog could speak three languages and help train horses, though, so it’s no doubt worth every penny.

Of course, most German Shepherds won’t cost anywhere near that much. However, the reason some breeders can charge so much for these dogs is that they truly can be trained to do almost anything.

The average cost of a purebred German Shepherd can range from $500 to $1,500. However, if you want one with premium bloodlines, you can pay as much as $20,000 for the honor. That’s only for people who want to breed or show the dog, though.

You can also likely find a perfectly good German Shepherd at your local pound or from a rescue group. While a pound dog might not speak multiple languages, it can provide you with years of loving companionship. You can spend the $230,000 you saved on dog biscuits.

Isn’t There a Breed Called the “American Alsatian?”

Yes, but these dogs have absolutely nothing to do with German Shepherds.

The American Alsatian is a new breed, dating back to the 1980s. It’s also called the “North American Shepalute,” so apparently the British don’t have a monopoly on silly names.

Breeders designed the American Alsatian to be a recreation of the dire wolf, a species that has long since gone extinct. As you’d expect, they look more like wolves than they do German Shepherds, so there’s no mistaking the two breeds.

However, that doesn’t mean they don’t have German Shepherd DNA in them. In fact, the first American Alsatian was created by crossing a German Shepherd with an Alaskan Malamute. They would later mix in breeds like the English Mastiff, Great Pyrenees, Irish Wolfhound, and Anatolian Shepherd.

The end result is a massive, intimidating dog with a sweet and loyal disposition. If the German Shepherd is the perfect gift for the “Band of Brothers” lover in your life, you should get an American Alsatian for the “Game of Thrones” fanatic.

Which Dog Is Right for You?

If you’re in the market for a new pup, you could spend hours debating the merits of the Alsatian versus the German Shepherd. At the end of the day, though, you can’t go wrong with the dog, no matter what they’re named.

Why Are German Shepherds Used as Police Dogs?

5 Simple Ways to Stop Your Dog From Climbing a Fence