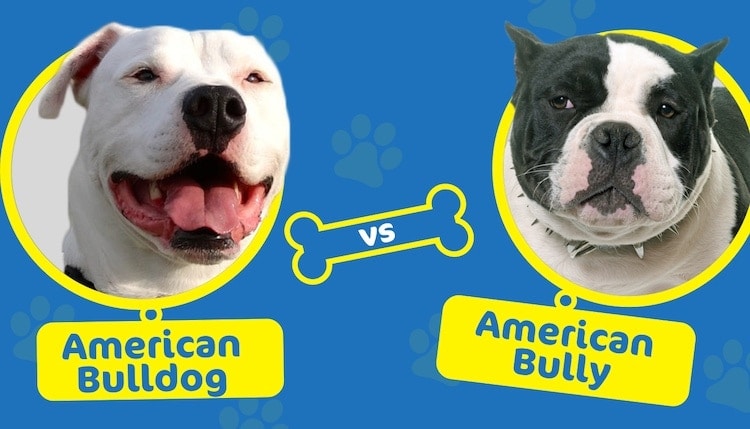 Dog breeds can get confusing, especially since there are so many that look and sound somewhat identical. This is especially true for American Bullies and American Bulldogs, which, believe it or not, are two completely different dogs.

Both dogs are often mistaken for American Pitbull Terriers (which can make the confusion worse) whose nickname “Pitbull” is often a catch-all term used to describe any muscular dog with a boxy head.

If you’d like to be able to tell American Bullies and American Bulldogs apart, this handy guide should tell you everything you need to know.

The Harrier and the Beagle have a lot of similarities, but they do have their set of unique characteristics. Let’s break it down.

The American Bulldog is a considerably older breed, and it’s descended from the now-extinct Old English Bulldog, which is also the ancestor of the modern English Bulldog.

Immigrants from England brought the Old English Bulldog over to America beginning in the 17th century C.E., and they mainly used the dogs to protect livestock, guard property, and hunt feral hogs. As a result, the pups were bred to be large and powerful.

The American Bully is a much younger designer breed. It originated in the United States in the 1980s and was intended to be a more family-friendly version of the American Pitbull Terrier.

The end result of that rich genetic soup was the modern American Bully.

Both of these are large, powerful dogs, although the American Bulldog is slightly larger, weighing in at as much as 120 pounds compared to the Bully’s 110 pounds.

They both have boxy heads and muscular bodies, although the Bully takes these to the extreme. It basically looks like a larger Pitbull on steroids, right down to the taut skin and pointed ears.

The American Bulldog, on the other hand, shares a lot of traits with the English Bulldog, including lots of loose, wrinkly skin. It has a broad, powerful chest, but its muscles aren’t on display quite as much as the Bully’s are.

Both breeds come in a wide array of colors and markings, and both have short, smooth coats.

You’ll need to be sure to train and socialize both breeds thoroughly, as they’re extremely strong and powerful animals.

The American Bulldog is an active and fun-loving breed, but it does have a tough, stubborn side. As a result, it may not be ideal for first-time owners, or for anyone who doesn’t think they can be consistent and firm during training. However, it’s not prone to aggression.

Despite their fearsome appearance, aggression has been specifically targeted to be bred out of the American Bully, and these are loving and gentle family pets. They’re still incredibly strong, though, so]= you’ll need to train them, so they don’t hurt someone accidentally.

They’ll each need plenty of exercise and both respond well to being given jobs to do. The Bully also tends to perform well in athletic competitions like weight pulls and agility contests.

Given how new the American Bully is, it’s hard to give a firm answer as to their health. So far, it seems to vary wildly by the individual, with some animals living long, issue-free lives while health problems beleaguer others.

American Bulldogs have been known to have joint and spinal issues like hip dysplasia, and certain bloodlines are prone to kidney and thyroid issues as well. These dogs love to eat, so obesity can be an issue if you’re not careful.

The American Bulldog enjoys a slightly longer lifespan of 14-16 years compared to the Bully’s 8-12 years.

Both breeds are fairly low-maintenance since they have short, bristly coats that don’t require a lot of brushing or bathing. They tend to do well in the summer but should be kept indoors in the winter.

American Bulldogs need a bit more grooming, as the skin folds on their face need to be wiped down every week or so to keep bacteria from forming, as this can lead to infection.

Given that both dogs can be fairly healthy, you shouldn’t have to spend too much on medical care during their lifespans. Adopting a Bully can be more expensive, though, as you’ll likely have to go through a specialized breeder to get one.

These are very big dogs, so don’t even think about bringing one home unless you can feed it — and feeding them isn’t cheap. They may also need specialized weight-control food, especially later in life, and that can drive costs up even further.

On the whole, though, these low-maintenance pups shouldn’t be any more expensive than any other large breed dog.

Anyone who admires either the American Bulldog or American Bully will also be crazy about the other, as they share a lot of similarities. Beyond resembling one another, they both have goofy, people-pleasing personalities.

However, as shown above, the American Bulldog and American Bully are very different dogs, so don’t mistake one for the other. Even so, they’re both incredible pets, and your family will likely be thrilled with whichever one you bring home.