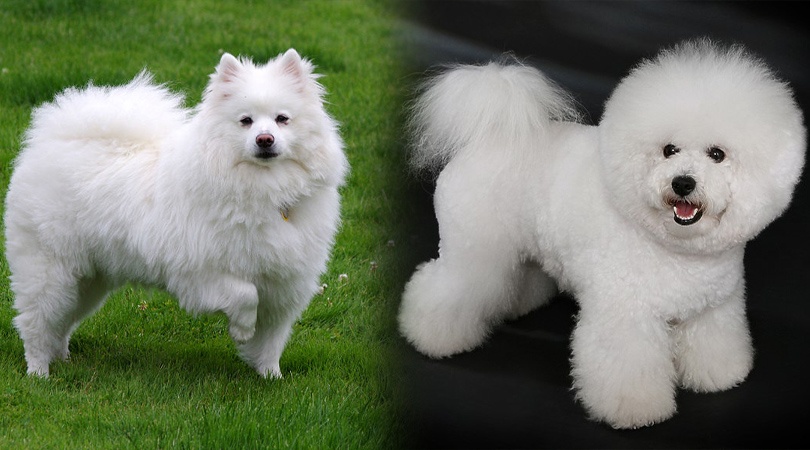 The American Eskimo Bichon Frise Mix is also known as a Bichomo. Its appearance is heavily dependent on which parent it takes after more, but you can expect your dog to be small with white or cream-colored fur. It will also have a round head, medium-sized muzzle, long body, and short legs.bru

The American Eskimo Bichon Frise Mix is an intelligent breed that’s easy to train. Since it is the product of parents that run in packs, it will require you to take on the role of alpha, or it will take on the role itself, which can lead to a misbehaving pet that tries to dominate you. It’s too small to frighten away intruders, but it is extremely alert and will warn you if any are in the area.

Bichon Frise American Eskimo Mix Puppies – Before You Get One…

1. The Bichon Frise was once used for bartering.

2. The American Eskimo parent made a name for itself as part of the Barnum and Bailey Circus as a tightrope walker.

3. Royalty, particularly Francis I and Henry III, kept the Bichon Frise as pets.

The American Eskimo Bichon Frise Mix are alert dogs that will help keep your home safe. They enjoy playing with children and are popular with the elderly. It’s an intelligent breed that learns very quickly. They can earn plenty of commands but struggle with housebreaking, and you may require professional assistance in that area. Early socialization is required to open lines of communication between you and your pet, or else they can become tyrannical and difficult to control.

American Eskimo Bichon Frise Mix makes great family pets and can help out with simple tasks around the home. The elderly will enjoy their small size and cuddly nature while the children will enjoy playing games for hours on end. Their small size also makes them safer around toddlers because there is less risk of the puppy knocking over and injuring the child.

The American Eskimo Bichon Frise Mix can get along with other pets if you socialize them early, so they are used to hem by the time it becomes an adult. This breed is likely to chase small animals like squirrels and rabbits that enter your yard.

Let’s look at some things you should consider before you purchase an American Eskimo Bichon Frise Mix.

The American Eskimo Bichon Frise Mix is a small dog that will not require much food. Still, it is important to purchase a high-quality brand that uses real chicken, beef, turkey, or other lean meat while avoiding brands that use meat byproducts or other non-specific meat. Brands specially formulated for small dogs can help ensure your pet gets the nutrition it needs.

The American Eskimo Bichon Frise Mix will require a considerable amount of exercise each day to stay fit. This breed can also become bored and get into mischief if you do not let out some built-up energy. Expect to spend about an hour each day going for walks or throwing a ball. A large yard will allow your pet enough room to stay fit without leaving home.

You must start training these pets early because they can be stubborn and can even misbehave on occasion. They are smart enough to learn most tricks, and they will also learn how to get what they want from you, but they are famously hard to house train. It might be a good idea to get them enrolled in a puppy school where experienced trainers can help make sure your dog relieves itself outside and to give you pointers on keeping the American Eskimo Bichon Frise Mix in line as it ages.

The American Eskimo Bichon Frise Mix will require daily brushing to keep the coat neat  and free of knots and tangles. You will also need to brush their teeth regularly to help prevent gum disease and reduce bad breath. Nail clipping is yet another part of grooming that you will need to do every few weeks. You will know it’s time to clip the nails when you can hear them clicking on the floor as it walked.

Usually, mixed breeds have fewer genetic health conditions than a purebred dog, and the American Eskimo Bichon Frise Mix is no exception. However, there are still a few things that can occur, and we’ll go over them in this section.

Pancreatitis is when your pet has a swollen or inflamed pancreas. The pancreas releases enzymes that help with digestion as well as regulate blood sugar levels. It can result in damage to the liver, gall bladder, and intestines. Pancreatitis requires immediate medical attention, and symptoms include nausea, vomiting, and diarrhea. Intravenous fluids and medication are some treatments, along with a diet low in fat.

Intervertable Disk Disease is a painful back condition that involves the small shock absorbers between each disk in the backbone. They can become dried out and longer absorb the vibrations of movement, which results in pain. These small pads can also begin to put pressure on the spinal cord. Some symptoms of intervertable disk disease include not wanting to eat, yelping when picked up, and shaking and trembling. Surgery and medication may be required, depending on the danger to the spinal cord.

Obesity is a major concern among many breeds of dogs and is especially in smaller dogs because it’s easy to overfeed small dogs. Obesity can lead to several other diseases that can shorten the lifespan of your pet. Using high-quality dog food in small amounts is one of the best things you can do to avoid obesity. Limiting treats will also help keep your pet’s weight down and always make sure your pet gets plenty of exercise.

The female American Eskimo Bichon Frise Mix is more independent than the male and likes to be in control. The females will also mark their territory and respond more aggressively to anything she sees as a threat. The males are more affectionate and usually spend their time seeking attention. They are food motivated, which makes them easier to train.

The American Eskimo Bichon Frise Mix is a great family dog that the entire family will enjoy. Their small size allows them to fit in with living arrangements and easier to find room for them to run and play. It can be stubborn and is better suited to an experienced owner, but patience, positive reinforcement, and a will to spend time with them each day will usually be enough to win over their loyalty.

We hope you have enjoyed reading about the American Eskimo Bichon Frise Mix and have found it helpful. If you have never heard of the Bichomo before, pleas share this complete guide on Facebook and Twitter.