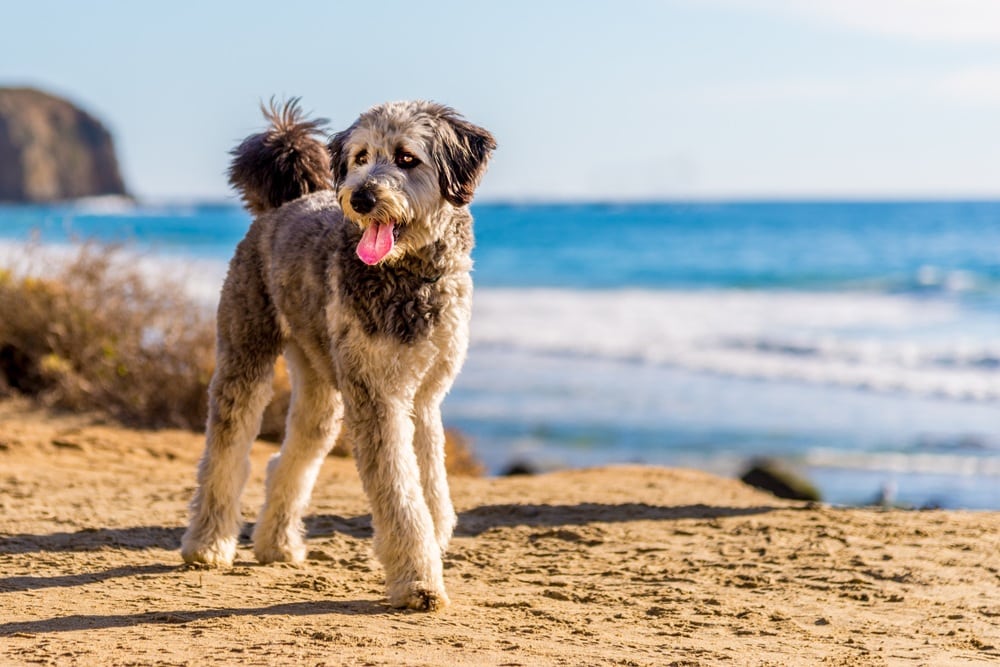 If you’re familiar with Aussiedoodles — the Australian Shepherd/Poodle designer breed — then you probably know them for one thing: being hypoallergenic. But are they truly safe for allergy sufferers? The answer is: probably not.

If you want to know exactly what that means, this guide will fill you in on everything you need to know about owning one of these dogs if you have a sensitive respiratory system.

However, no dog can truly be said to be hypoallergenic.

Certain dogs (like Poodles or yes, Aussiedoodles) shed less than others, and the thinking is that they also create less dander. Because of this, it’s believed that they also produce less of the allergen that’s responsible for allergic reactions in people. However, a 2012 study indicated that they may actually produce more of that allergen than supposedly non-hypoallergenic dogs.

There is no evidence that any dog can be hypoallergenic. So, why are Aussiedoodles considered as such? Simple: There’s a wealth of anecdotal evidence, largely from allergy sufferers, that indicates that these dogs might be easier on the sinuses than their “non-hypoallergenic” counterparts.

It’s important to note that this evidence is likely all based on the placebo effect. People believe that these dogs are better for their allergies, so they don’t report as many symptoms as a result. If you love dogs and suffer from allergies, you might want to give an Aussiedoodle a try — but now that you know the truth, the placebo effect might not work for you.

Are Hair and Dander Even Responsible for Allergies?

As it turns out, the hair is harmless but the dander isn’t. Dander is one of the leading causes of pet-related allergies, but it’s not the only one.

Many people are also allergic to dogs’ saliva and urine. Now, you might think that as long as you don’t let your dog lick you or pee on you, you’ll be fine (and we definitely don’t recommend the latter).

However, traces of that saliva and urine get all over a dog’s fur as well (and in the case of some breeds, there are more than just traces of saliva). When you pet your dog, you come in contact with the allergy-causing proteins in their urine and saliva, which can cause skin irritation or even respiratory problems if you touch your nose without washing your hands first.

All this means that if you have severe allergies and you want a dog, you may be able to get one — provided that you never touch or breathe around them, that is.

Are All Dog Breeds Equally Bad for Allergy Sufferers?

No, not necessarily, but as we’ve seen, the supposedly hypoallergenic breeds might be worse than their non-hypoallergenic counterparts.

Generally speaking, though, there is no breed that’s “safe” for an allergy sufferer to own. However, there may be individual dogs that are better for you than others.

This is because not every dog creates the same amount of allergy-causing proteins. Some are ripe with them, while others hardly make any at all. Unfortunately, though, there’s no way to tell in advance which one a dog might be, other than by interacting with it and waiting to see if symptoms arise.

This may be another reason, along with the placebo effect, why some allergy sufferers swear by their hypoallergenic pups. They may actually have fewer symptoms with those dogs, but that’s due to the individual dog, not their breed.

Also, as a general rule, smaller breeds produce less of everything, including dander, urine, and saliva. It’s not a perfect solution, but you might do better with a Chihuahua than you would a St. Bernard.

Is There Any Hope for Dog-Loving Allergy Sufferers?

As it turns out, there are a few things that you can do to boost your chances of being able to own a pooch. Most of them involve taking a closer look at yourself rather than your dog, however.

The most important thing to do is to schedule an allergy test. This will determine what, exactly, it is that you’re allergic to. You may be surprised — it may turn out that you’re not allergic to dogs at all, but rather something else entirely (such as something they bring in from outdoors, like pollen).

If that’s the case, you might be able to own any breed of dog. You’ll just have to be careful about letting them come in contact with whatever it is that’s causing your allergies.

There’s also hope for people who truly are allergic to dogs. Some allergens are only produced by male dogs, so if that’s the allergen that’s causing you problems, it might be safe for you to bring a female pup home.

You can also talk to your doctor about getting medications to manage your symptoms, but most medical professionals will urge you to get rid of the dog rather than trying to keep your runny nose at bay. If you’ve already grown attached to your pup, though, it’s worth looking into.

Can I Reduce the Amount of Allergens in My Home?

The most important thing to do is keep your dog well-groomed. If you brush off all that dander and wash away the urine and saliva, there will be fewer allergens on your dog for you to react with. However, you probably don’t want to do the grooming yourself, as that can cause a massive allergy attack. Have a friend or better yet, a professional handle it.

Keep your home clean as well. Even a well-groomed dog will shed and drool, so vacuum your carpets and curtains and mop your floors regularly. Pay attention to surfaces like counters, and wash your bedding often if you allow your dog to sleep beside you.

Don’t neglect your own hygiene either. Wash your hands immediately after petting or playing with your dog, and wash your face if your dog licks you. The sooner you clean off those allergens, the less chance they’ll have to cause problems.

So, What’s the Verdict? Are Aussiedoodles Hypoallergenic?

It’s likely that hypoallergenic dog breeds don’t exist, and Aussiedoodles certainly don’t seem to be the exception to the rule. They’re just as likely to cause problems for allergy sufferers as any other breed (and may even be more likely).

That doesn’t mean you should just write the breed off, however. Many allergy sufferers seem to do better with these dogs for some reason — possibly due to the placebo effect — and a dog’s allergen production does vary based on the individual.

If you suffer from allergies but still plan on getting a dog, you may be able to own an Aussiedoodle, but don’t think that you can only own a breed like the Aussiedoodle. Instead, play with a variety of different pups until you find one that agrees with you. Finding the right animal is like discovering a match made in heaven.

6 Health Benefits of Honey for Dogs – Based on Science

How Much Does a Pointer (German Wirehaired) Cost? (2022 Price Guide)

Can Dogs Eat Honeydew? What You Need to Know!