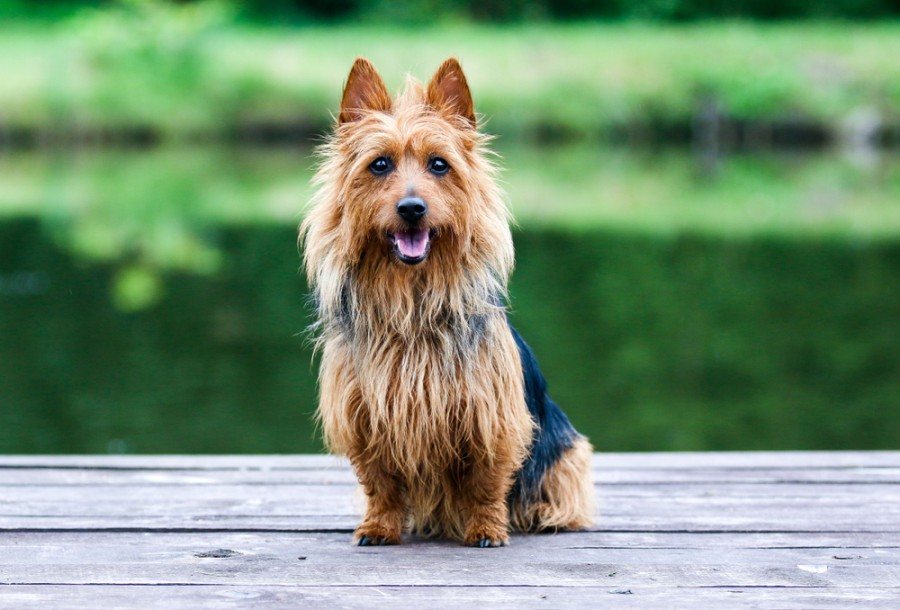 They may be tiny in size, but Australian Terriers have big personalities stuffed into their little bodies. They’re courageous and smart, bred to hunt rats and snakes in the hot, tough, dangerous outback. It was necessary that they become fearless, hardy, and just as tough as the outback they were living in.

But these versatile dogs are a lot more than just tough pups capable of hunting and killing dangerous snakes. They also make loving, affectionate companions, the perfect little dogs to become your new best friend. They’re great with kids and ideal for families, but they don’t get along so well with other dogs. They tend to be a bit selfish, wanting all your attention for themselves.

These dogs want to be a part of your family’s everyday life. They want to feel like they’re an integral part of the pack and won’t do well if left alone for long periods. They’ll quickly become destructive and unruly, though they can easily be turned into highly-obedient pets with a little training and positive reinforcement.

Australian Terrier Puppies – Before You Get One

1. They’re the First Native Breed Recognized and Shown in Australia

This stems back to their Terrier heritage. Like all Terriers, Australian Terriers love to dig. For this breed, digging isn’t a destructive behavior that they turn to when they’re bored or feeling neglected; it’s an all the time behavior that do because they love it! If you’re planning on adding an Australian Terrier to your household, expect to find numerous holes strewn randomly across your backyard!

3. Their Attitudes Are Larger Than They Are

At just 15-20 pounds in weight with heights that top out around 11 inches, there’s no question that the Australian Terrier is a small dog. We all know it, but they don’t. If you let the Australian Terrier’s personality tell it, they’re about the largest dog you’ve ever come across! This trait came in handy back when these tough little dogs were used to hunt rats and rattlers in the hardy outback heat. Today, it makes them endearing and comical; part of the reason that so many love this adorable little loudmouth.

Temperament & Intelligence of the Australian Terrier 🧠

Full of energy and ready to have fun at any time, the Australian Terrier can keep you entertained with its continuous antics. But these are also highly intelligent dogs that do best when given tasks and training. They excel at obedience training, often striving to continue reaching each subsequent level.

Your Australian Terrier will want to be a constant part of everything you do. They don’t like to be left at home alone where they feel left out. If you leave an Australian Terrier alone too long, they’ll start to act out with destructive behaviors.

Overall, Australian Terriers are friendly and good-natured. They can get a bit aggressive towards other animals though. They have a high prey drive and will likely always want to give chase to smaller animals they spot.

Australian Terriers do exceptionally well as family pets, provided they’re the only pet in the family. They can get along well with kids and form bonds with each family member. And since they’re a breed that wants and needs near-constant affection from their family, having additional family members around to help provide your Terrier with ample amounts of love can be very beneficial.

Though Australian Terriers do well with families in general, they don’t do well with other pets. This breed has a very strong prey drive that’s naturally instilled in them as hunters. Even with socialization, that prey drive is going to be quite difficult to break. It’s best to keep Australian Terriers in single-pet families where they can keep all the attention for themselves; precisely the way they want it.

Things to Know When Owning an Australian Terrier:

Australian Terriers might be a small breed but they’re also rather active. They’ll need about one-half to one-cup of dry dog food each day. Look for high-quality food that’s intended specifically for small breed active dogs and your Terrier should do well.

Luckily, they’re not known as picky eaters and you should have no problems getting your Australian Terrier to eat whichever food you feel is best. And unlike many other breeds, Australian Terriers don’t generally overeat. This means you won’t need to worry as much about overfeeding.

Though this breed has plenty of energy, they don’t require excessive amounts of physical exercise. 20-30 minutes of exercise each day should keep your Australian Terrier healthy and happy. This is best done in two or three short, brisk walks spaced throughout the day.
Aside from this structured exercise, your Australian Terrier won’t require much. They don’t need a lot of space thanks to their small size, so a large yard won’t be necessary. In fact, they can even do well as apartment dogs, provided you don’t forget to provide that much-needed 20-30 minutes of exercise every day.

Because they have a short attention span, training sessions with your Australian Terrier will have to be short. But this is a breed that will definitely benefit from training and obedience. They learn quickly, but they’re also stubborn and independent. You’ll need a firm hand and lots of positive reinforcement to train one of these pups.

Australian Terriers require less grooming and maintenance than their longer-length coat might lead you to believe. They have a double coat that’s weatherproof to protect them from the changing conditions of the outback. But despite this, they only need to be brushed once each week.

However, they do have a problem area that needs regular attention. Long hairs will grow from between their eyes and can become an irritant if left unchecked, so you’ll need to trim or pluck these regularly.

Be sure not to bathe your Aussie too much. Bathing softens their coat, impeding its natural ability to shed dirt. Worse, bathing too often can cause your Aussie’s skin to become flaky and dry. You should limit bathing only to the times when it’s absolutely necessary.

It shouldn’t be much of a surprise that a dog bred to withstand the harsh and uninviting conditions of the Australian outback wouldn’t have many health concerns to be worried about. In fact, there are no serious conditions to look out for with Australian Terriers. But there are a few minor conditions that you ought to keep an eye open for if you’re going to raise one of these dogs.

Though most dog breeds show some notable differences between males and females, that’s not the case with Australian Terriers. Both sexes tend to be about the same size and weight. Likewise, they share similar temperaments, though males can sometimes display more dominant behaviors than females.

If you’re looking for a high-energy sidekick with a ton of personality in an adorable little package, then the Australian Terrier might be the dog for you. They’re small yet courageous, with the toughness of a dog bred to live in the harsh Australian outback and the affectionate attitude of a loving companion pet.

They’re fast and alert, ready to strike at prey at a moment’s notice, leftover genes from when they were hunting snakes and rodents in the desert of the outback. They make great pets, just make sure you’ll be home to provide the ample amounts of attention that this breed requires.