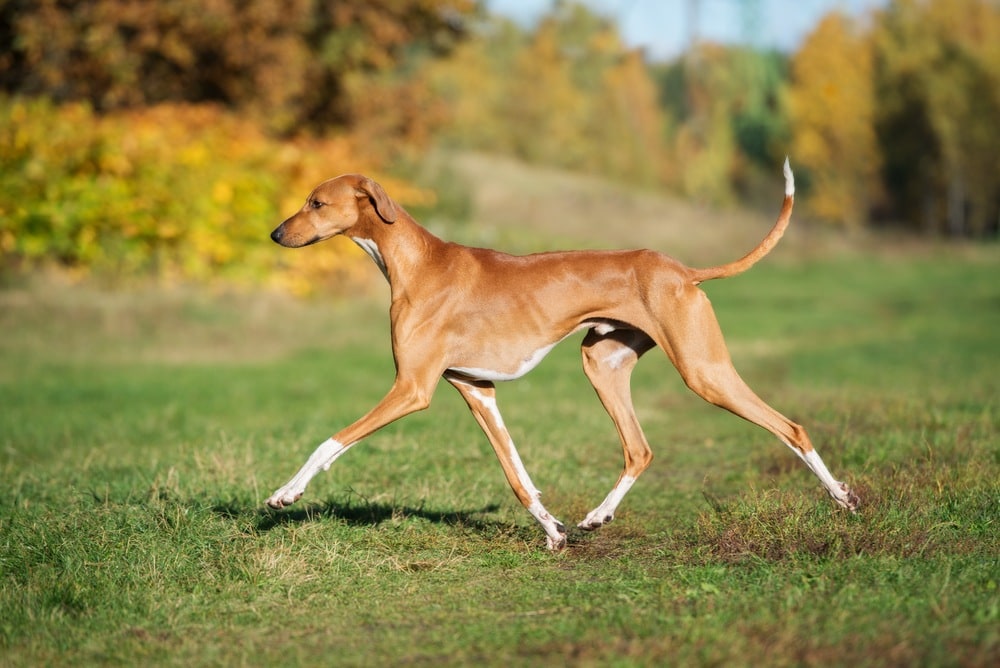 You may not have heard of the Azawakh, but you won’t forget him. He strikes an eye-catching image with his lanky appearance and penetrating gaze. He is a dog of the Sahara where he hunted game. He is well-equipped for the task, too, being capable of speeds up to 35 mph. As you may surmise, this pup needs daily exercise as a result.

The Azawakh had been a part of the American Kennel Club’s Foundation Stock Service Program, which acts as a bridge toward full breed recognition. He is now part of the Hound Group. This pup hunts by sight. He gets his name from the Valley of the Azawakh from which he originated. While the local people have known of this breed for centuries, Europeans didn’t discover him until 1970.

His background helped foster his steadfast devotion and affection for his family. The Azawakh is a quiet dog, not given to barking. Surprisingly, he can adapt to apartment living. It’s probably also a function of his job and past. After all, undoubtedly, the safe place to stay is on your home turf.

Azawakh Puppies – Before You Buy…

The size of the Azawakh is a vital consideration when thinking about buying a puppy. While he doesn’t have the bulk, he is certainly tall enough to intimidate smaller children. He is moderately sensitive with a reasonable amount of playfulness.

While the Azawakh can tolerate hot weather, the cold is another story. He’ll fare best if you limit his time outdoors when the temperature dips. This pup has a keen prey drive, so he might chase an animal that runs from him. However, he doesn’t have a high wanderlust potential. If trained properly, he’ll stay on the property and not stray even in yards that aren’t fenced-in, remarkably.

The Azawakh has an independent streak, which isn’t uncommon for dogs of his type. Nonetheless, he is not the best choice for a first-time pet owner. Training may prove challenging for some individuals when combined with his reserved manner.

You’ll likely have difficulty finding an Azawakh in the United States. It is an extremely rare dog outside of his homeland. If you do succeed in finding a breeder, you’ll probably end up on a waiting list. Combining these factors, you can easily expect to pay upward of $2,000 or more for a puppy. Make sure that he is at least 12 weeks old before you take him home. He needs this time with his mom and littermates.

The breed’s rarity is a fortunate thing when it comes to congenital conditions since overbreeding is probably a non-issue. Nevertheless, we’d suggest you stick with reputable sellers who screen for common canine health problems, such as hip dysplasia and hypothyroidism. You may end up paying more for an Azawakh puppy, but you’ll find that it’s worth the cost in the end run.

Buying a puppy is just the start of the expenses of pet ownership. Your first year will likely be the most expensive, especially if you choose to spay or neuter your dog. Your annual cost will run over $1,000 and maybe more, depending on how much you like to spoil your pup. It’s imperative not to skimp on preventive care, such as yearly vet visits.

1. The Azawakh shares an odd habit with horses.

If you’ve been around horses, you know that there is one quirky thing about them. They can sleep while standing upright. The Azawakh can also snooze in this position.

2. The Azawakh’s gait resembles one of his common prey species.

To watch an Azawakh run is a treat. He glides over the ground with little risk of hurting himself even over rugged terrain. His gait will remind you of a gazelle or deer bounding across the landscape.

3. The Azawakh is the new kid on the block.

It took a while before Europe and America recognized the Azawakh. The AKC granted him that status in 2019 with the United Kennel Club (UKC) doing so in 1993.

Loyalty is the hallmark of this breed. The Azawakh is quite affectionate with his family, even if he doesn’t show the same emotion for strangers. He is a gentle pup that isn’t aggressive or overly timid. We’d say he’s more middle-of-the-road when it comes to temperament. He is an intelligent dog, which comes from his hunting background. He is well aware of his surroundings and everything in it.

The Azawakh has a moderate tendency toward nippiness. It’s a bad habit that you must correct as a puppy. This pup is a sensitive pooch, so gentle handling is the best approach with discipline and training. As you may guess, this dog needs attention. He doesn’t like being alone for long stretches. He’s not a dog to leave in the yard or his crate.

Are Azawakhs Good for Families?

The Azawakh does better in a home with older children. He doesn’t like roughhousing much. He prefers an owner that is as gentle as he is. This pup is loving but needs careful handling. His devotion to his family means that he can make an excellent watchdog. If you do have kids, we recommend that time with your Azawakh is supervised.

Do Azawakhs Get Along with Other Pets?

It’s always problematic to bring a hunting dog into a home with other pets. The Azawakh is a pack animal, so he may tolerate other dogs, especially if you socialize him as soon as you bring him home. However, cats and other small animals are off the table. A fleeing feline will likely inspire a chase around the living room. The same caution applies to rabbits and ferrets.

Things to Know When Owning an Azawakh:

The temperament of the Azawakh is one of the significant issues of owning this pup. Fortunately, many other aspects of his care are easy-peasy. His needs are simple: lots of attention, a healthy diet, and a good run every day. We’ll delve into more details about what to expect when you invite this pup into your life.

The Azawakh has a moderate tendency for gaining weight. Therefore, it’s essential to monitor his body condition. He should always look sleek with that distinct waistline. The concern on the other end of the spectrum exists, too, especially if you’re running him a lot. Ideally, you can feel his ribs without them seeming bony.

Puppies need three or four meals evenly spaced throughout the day. That will ensure that his blood sugar levels stay stable and that he has a reliable energy source. Make sure he also has plenty of fresh water available. As your Azawakh gets older, you can cut back to feeding him two times a day. We recommend that you stick to this plan and don’t reduce it to one.

Like many deep-chested breeds, the Azawakh is susceptible to bloat or life-threatening gastric dilatation and volvulus (GDV). This condition occurs if a dog gulps down a lot of food or water at one sitting. It causes his stomach to distend with the risk that it will twist. The signs are unmistakable. He’ll seem like he’s in distress and pain. He may even bite because it hurts so much. Suffice to say it’s an emergency.

Just one look at the Azawakh, and you know he is a running dog. You have to be if you’re a pup that hunts gazelle that can run up to 50 mph. Daily walks are a must-do with this pooch. If you’re a jogger, you’ll have a willing companion on the trail. Visits to the doggie park depend on his canine manners and if you have socialized him properly. We suggest supervision at all times.

The Azawakh is an intelligent dog, which his hunting background encouraged. He had to keep track of his prey and make quick moves to keep with them. Positive reinforcement is the best way to train this pup. He is sensitive to harsh reprimands. We suggest using treats only as a training aid to take care of these two aspects of care at one time, weight control and training ease.

Grooming an Azawakh is straightforward with his silky coat. A combing session at least once a week will keep him looking his best. Check his ears occasionally, too, to stay on top of any ear infections. If you run him on the pavement, his toenails will probably remain trim. However, inspect them regularly and cut them back as necessary.

The Azawakh is a healthy breed, thanks to his active lifestyle. If he stays fit, he’ll avoid many of the issues associated with obesity, such as diabetes. Regular preventive care is imperative for any pet. It’s also a chance for him to meet new people and keep up with his socialization skills. As we mentioned earlier, reputable breeders will conduct the routine health screenings.

You’ll have a delightful pet no matter which sex of Azawakh you get. Males and females are similar in size and weight. It’s a matter of preference. Whether you choose to breed your pup might be a tipping factor. Remember that it’s a serious decision whether you undertake this effort. Spaying or neutering is an equally weighty matter. We suggest you discuss your options and timing with your vet.

The Azawakh is a striking dog that leaves an indelible impression. He is graceful and almost catlike in his temperament and disposition. The fact that he is easy to groom and has few health problems are significant points in his favor. Although you may have trouble finding one, you’ll be amply rewarded if you succeed. This pup will give you years of joy and happiness.