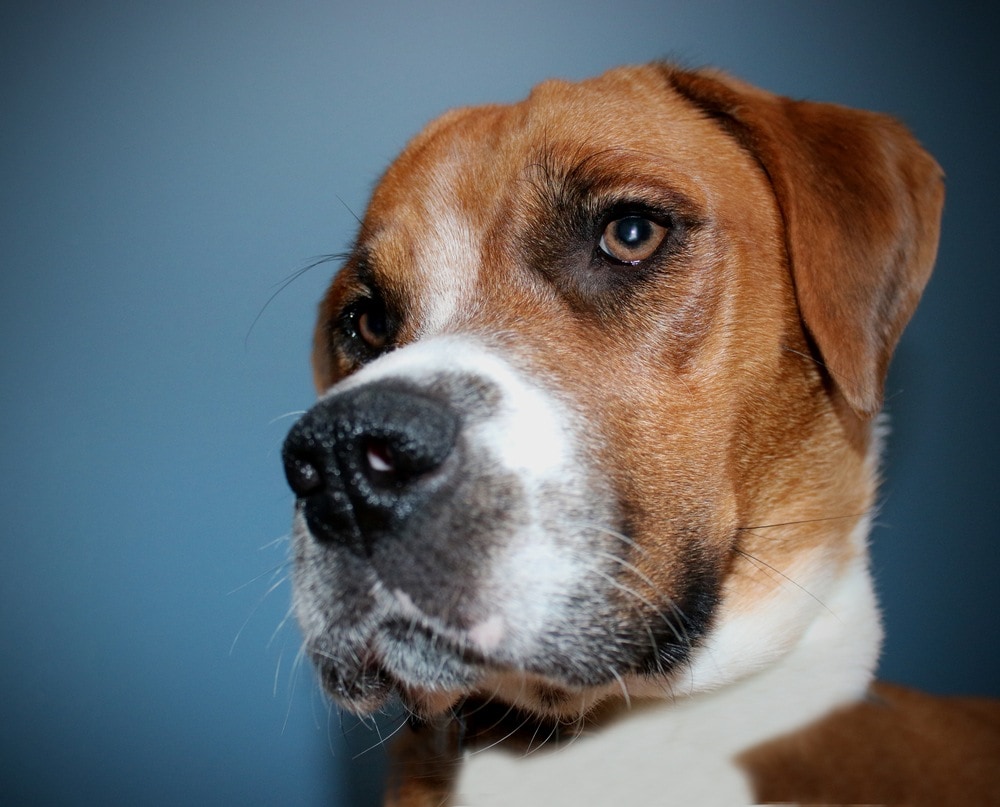 The Boggle (sometimes spelled “Bogle”) is a mix between a Boxer and a Beagle. The result is an adorable and energetic pup who brings joy wherever his puppy paws carry him.

This breed varies quite a bit in physical appearance, as each individual dog can inherit traits from either parent or both. Each Boggle can look totally different, some like medium-sized Boxers, some like larger Beagles, and everything in between.

This is an alert and loyal dog which makes them great for families of any size, and given their activity level they are best suited for homeowners who have space for them to run and play in the yard. However, provided they get their recommended activity each day, they are adaptable to apartment life as well.

If you think this breed might be a good fit for you and your family, keep reading! We’ll go over everything you need to know before committing to a Boggle.

Boggle Puppies – Before You Get One

Before you rush to the breeder to round up as many Boggle puppies as you can hold — and we know it’s tempting — there are some things you should know about this breed.

Boggles can be slightly food aggressive and distrustful toward strangers. Although they’re generally friendly dogs, these two behaviors can be common in this breed which may make them seem aggressive or unfriendly. You should be prepared to socialize and train your puppy from the very beginning, as the first few months of a dog’s life are when they are the most impressionable. You can limit or even completely avoid these behaviors if you begin proper training early on.

If you plan to bring your Boggle pup into a home with children you shouldn’t have any issues, and your dog will learn to love and trust your kids. However, introducing this breed to children later on in their lives can be problematic. This is an important thing to keep in mind if your family is still growing.

1. Some of Their Ancestors Are Extinct

You know the Boggle is a mix between a Boxer and a Beagle, but what you may now know is that the Boxer is a descendant of a now-extinct breed called the Bullenbeiser.

Also known as the German Bulldog, the Bullenbeiser was a breed that originated in Germany and was bred for hunting and retrieving big game, an unsurprising role seeing as their name translates to “Bull Biter.”

Bullenbeisers became extinct through excessive crossbreeding, which is how we ended up with the Boxer and eventually the Boggle. Hopefully, these breeds are here to stay!

2. They Have Very Extensive Ancestry

Although the Boggle was first popularized in the early 2000s, the Beagle parent breed dates back to the 5th century!

About 1,500 years ago Beagles were prominent in Ancient Greece and were being used as hunting dogs. Most established dog breeds today don’t date back this far, so your Boggle will be a small piece of history.

Many people are well aware that Beagles are very loud and tend to howl and bark at anything and everything, so they’re also inclined to think that Boggles have this same tendency. However, they would be wrong!

Like all other traits, the Boggle inherits its likelihood to bark and howl from both parents, but they tend to resemble their Boxer parents more in this regard who bark only as a means of protecting their family and home. You can expect your Boggle to bark if people approach your home or knock on the door, but they are otherwise fairly quiet dogs.

Temperament & Intelligence of the Boggle 🧠

Generally speaking, your Boggle will be a great addition to your family. They’re fun-loving and rambunctious dogs, so you can expect tons of personality and a whole lot of energy. They love interacting with their owners, especially adults, and they’re happy to goof off and be the center of attention.

This breed may be medium-sized, but their love of roughhousing is more representative of a larger dog. As much as they love to play and run around, these dogs are also rather affectionate, so when it’s time to relax, your pup will be happy to snuggle up next to you on the couch.

Boggles make good family pets for the right families. Like we mentioned before, they don’t always take well to being introduced to children later in their lives, and they prefer to be surrounded by adults regardless. If socialized early you should have no problems with children, but this breed will always prefer to be around grown-ups.

As far as their relationship with adults goes, your pup will fit right in! Boggles love being around familiar people, so the bigger your family, the happier your pooch will be.

This breed is also high energy, so multiple people living in the same household with them is often ideal, especially if it means someone will always be at home with them. This breed doesn’t do particularly well in isolation.

Boggles will usually be perfectly fine with other dogs, and they will likely befriend any other pooch they live with, especially if they grow up with them.

Because this breed gets its moderate-to-high prey drive from their hunting ancestors, you may want to avoid this breed if you have cats or other small pets, and especially rodents. Your pup’s love of the chase will very likely make for a negative relationship with cats or rodents. If your dog is introduced to a cat during puppyhood and socialized often, there may not be any issue at all, but there’s always a chance that acceptance will go sour.

Things to Know When Owning a Boggle

Although Boggles are a medium dog, their high energy level means they’ll eat more like a large dog. You should expect to feed your Boggle two to three cups of food every day, and this quantity can be split up into two or three meals. Because this breed can vary quite a bit in size, you should speak with your vet about your individual dog to avoid under- or over-feeding.

While these dogs have no specific diet requirements, you should choose a quality, high-protein commercial dog food formulated for medium dogs with high energy levels. Your pup’s activity will demand the proper nutrients to keep your Boggle happy, healthy, and energized.

Both the Boxer and the Beagle are medium-to-high energy dogs, and you can expect a similar energy level from your Boggle. These dogs will need about thirty to forty minutes of exercise every single day.

It’s important to note that your pooch will likely be very energetic even outside of their dedicated exercise time. You’ll likely find your pup eager to play and run around your yard throughout the day, but this should not be an alternative to a daily walk or run. To maintain proper health and to dissuade destructive behavior, you should plan on a vigorous walk or run each day in addition to their regular play and backyard frolicking.

Given their activity levels, many people who enjoy the outdoors will opt to take their Boggles on hikes or nature walks. This is an excellent option, but because of your dog’s prey drive you should be very careful they don’t escape trying to chase a squirrel or rabbit. Always walk your pup on a harness that isn’t easily backed out of, even when in the neighborhood.

Boggles are intelligent dogs and will pick up on commands and tricks quickly and easily. They’re best trained using positive reinforcement with treats, praise, and physical affection, and a regular, regimented training schedule beginning at an early age to help your puppy grow quickly into a well-behaved dog.

It’s important to note that while easy to train, these dogs will need some training above and beyond the common commands like sit, stay, heel, and lie down. This breed tends to be wary of strangers, so early socialization is a must. Teaching this breed that strangers are friends too is critical. You’ll also want to train them not to jump on people coming into your house as they have a natural tendency to do so.

Your Boggle will have short fur, which means that brushing isn’t required as often as it would be with longer haired dogs. You should plan to brush your Boggle with a wire brush once a week or so, and this is mainly to keep their coat clean and to cut down on shedding.

This breed does shed but not nearly as much as many other dogs. With weekly brushing, you shouldn’t need to pull out the vacuum too often to clean up loose fur.

To help avoid tooth and gum issues you should brush your pup’s teeth once a week or so or get them some toys that promote dental hygiene. You should also plan to wipe your Boggle’s ears clean about once a week to help avoid infections.

Being a mixed breed, Boggles are generally less susceptible to health conditions than their parent breeds. However, being aware of the issues that your dog can have is important to help catch them early and treat them as needed.

It’s also very important to note that many Boggles cannot be given acepromazine, which is a common canine sedative. This can lead to major heart issues, so it should be avoided entirely for this breed.

Male Boggles tend to be slightly larger than females, and you may find that they are a bit more food aggressive and more distrustful of strangers. Males can be slightly more energetic as well. For the most part, your Boggle’s temperament won’t be influenced much by sex and will depend more on which parent breed they inherit their personality and behavior from.

The Boggle is a great mix of two loving and loyal dog breeds, and they pull the best traits from both sides of their family trees. They have big personalities and will provide tons of entertainment and affection for you and your family.

These dogs can sometimes come off as unfriendly due to their possible food aggression and demeanor around strangers and children, but for the most part, you can expect a friendly dog that will welcome attention from family members and even other dogs — just try to keep them away from cats!

If you’re looking for a dog that will become a huge part of your family that’s always ready to play, wrestle, or fetch, the Boggle might be the perfect breed for you!

What Were Boxers Bred For? Boxer History Explained

How Big Do Poodle Get? (With Growth & Weight Chart)