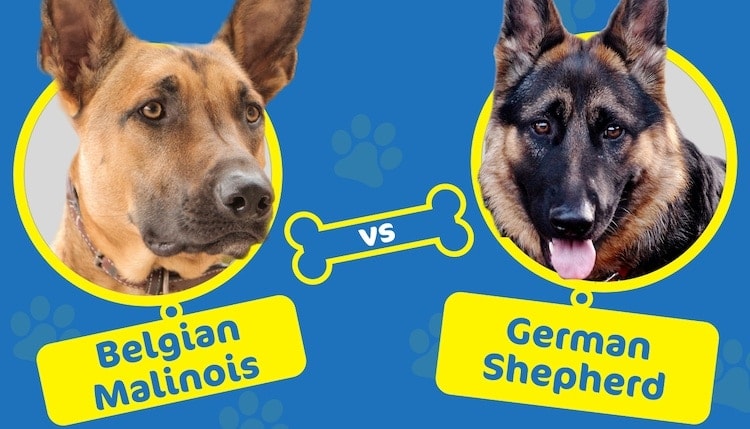 Out in the world, it can be hard to tell the Belgian Malinois and the German Shepherd apart. Once you get them side by side, though, the differences in their size, coloration, and build become abundantly clear.

While it’s important to highlight the differences between these two breeds, we can’t argue against their similarities. For example, both breeds originated as livestock guard dogs and are prevalent as working military and police dogs today. Each is also known for its intelligence and training aptitude.

So, what really differentiates the Belgian Malinois from the German Shepherd and vice versa? When it comes to choosing one of these breeds for yourself, which is the better option?

As you can see, both the Belgian Malinois and the German Shepherd have their set of unique characteristics. Let’s break it down.

The Belgian Malinois, sometimes shortened to Mal, is a hardworking breed with few equals. While some nations group the breed in with others as a Belgian Sheepdog, organizations like the American Kennel Club recognize them as their own breed.

According to most accounts, the Belgian Malinois emerged as an antithesis to companion dog breeds. While other dog breeders were creating fancy breeds guaranteed to draw the eye of doting pet owners, Malinois breeders set out to create a working dog unmatched in stamina and focus. They succeeded, and the breed is still acknowledged today as one of the hardest workers in the canine world.

Throughout the 1900s, the Belgian Malinois’s U.S. popularity was stagnant. The breed was brought over around 1911, but the World Wars quickly ended European dog imports. In 2019, however, the breed was thrust into the national spotlight when Conan, a working military dog, was honored for his bravery in Syria.

But as the breed jumped to the top of many prospective dog owners’ wishlists, many were left questioning if the Mal was really suited for the average American household.

At first glance, the Belgian Malinois would pass as a German Shepherd — to an untrained eye, at least. The Mal has a square, well-carried body equipped with plenty of lean muscle. The head is elongated, with a slightly pointed nose and upright ears. Their fur is short and dense, offering a good deal of protection from harsh weather. While the Belgian Malinois’s body ranges in color from fawn to mahogany, its face is covered by a black “mask.”

The same traits that make the Belgian Malinois the ideal police or military dog also make it a poor fit for many households. The breed is remarkably intelligent, but it is also bred for herding and guarding.

In other words, Mals have extremely high prey drives and are untrusting of strangers. This is normal for any hard-wired herding breed, but it means the Belgian Malinois is a poor fit for homes with cats, small dogs, or children. Consistent socialization from puppyhood is also necessary to prevent aggression toward humans and other dogs in adulthood.

For the right owner, the Belgian Malinois makes an excellent companion. This dog is well-suited to working on a farm or focusing its energy on a canine sport. As long as the Mal has a confident trainer and an outlet for its energy, anything is possible for the brainy breed.

On average, the Belgian Malinois has a lifespan of 14 to 16 years. The breed is generally quite healthy but is still prone to common large-breed ailments like hip dysplasia, elbow dysplasia, and certain eye conditions.

As with any purebred dog, choosing a reliable, ethical breeder is crucial to ensuring good health and a workable temperament.

Because the Belgian Malinois has a short, water-repellant coat, its grooming needs are quite limited. Brushing this breed’s coat once a week should suffice.

Keep in mind that the Belgian Malinois is a biannual shedder. During the fall and spring, owners can expect to find plenty of loose clumps of fur.

Toward the end of the 1800s, many breeders (the most famous of which was Captain Max von Stephanitz) fine-tuned the German Shepherd. Over several decades, this group created the first German Shepherd club and refined the breed to its modern iteration. At the time, the breed was almost exclusively used for herding and guarding livestock.

Today, the breed is most famous for its work in police K-9 units, but you’ll still find it in countless households as a companion dog.

As far as appearances go, the German Shepherd is known for its proud, curved posture. Despite the breed’s sheer size and muscularity, it’s capable of moving with immense grace. Many fans of the breed note that they have very different builds depending on their sex, with females having a notably feminine appearance compared to their male counterparts.

The most common German Shepherd coloration is the bi-colored standard, with distinct black and brown markings across the entire head and body. However, the breed comes in a wide range of official colors, including all-black, all-white, and almost everything in between.

The German Shepherd’s temperament is largely a product of its environment and upbringing. While undertrained and poorly socialized dogs can be hard-headed and even aggressive, properly trained German Shepherds are the ideal working dog. The breed thrives on having a close relationship with its owner, so it must be allowed to live indoors and participate in day-to-day household activities.

German Shepherds are always on alert, especially around strangers, but early socialization can quell much of the breed’s guarding instincts.

Because of its size, the German Shepherd is prone to hip and elbow dysplasia, as well as degenerative myelopathy (a disease affecting the spinal cord). The breed can also develop a serious large-breed condition called bloat.

The German Shepherd’s coat is a little longer than the Mal’s, but their grooming needs are similar. Weekly brushing should suffice, at least to remove loose fur and debris.

The breed sheds regularly, especially during the changing seasons. More frequent grooming during these times can help keep loose furballs at bay.

Belgian Malinois vs German Shepherd: Which Is Right for You?

The Belgian Malinois and German Shepherd both make excellent working dogs. When it comes to life as a family companion, however, one of these breeds is better suited to the job than the other.

While the Belgian Malinois certainly impresses with its unmatched focus and work ethic, it’s important to remember that this training doesn’t come naturally. To put it bluntly, few owners have the skill, experience, or lifestyle appropriate for such a breed.

If you’re set on one of these gorgeous dogs and are up for a little bit of a challenge, the German Shepherd makes a much better family pet overall. Don’t get it twisted, though, because the German Shepherd still has the brains to excel at almost any task! But a German Shepherd will be much happier living in the average household — given adequate mental and physical stimulation — than its Belgian cousin.

Have you ever owneda Belgian Malinois or German Shepherd? Are there any important differences (or similarities) we missed? Let us know!

Labradoodle vs. Goldendoodle: What’s the Difference?