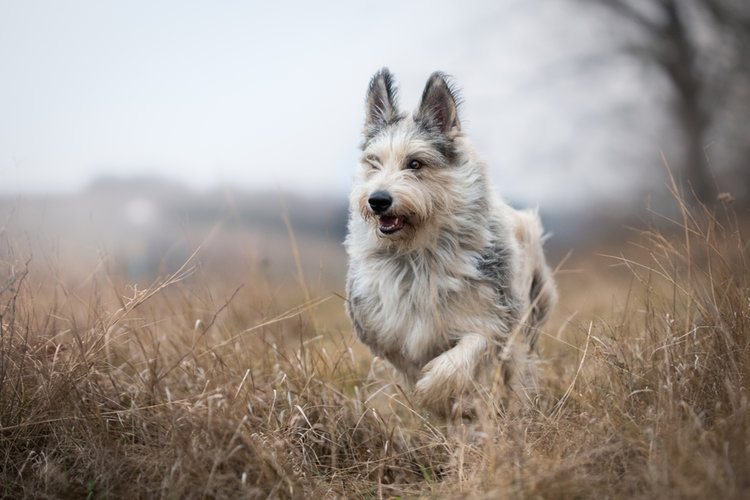 When was the last time you saw a Berger Picard dog in real life? Have you ever heard of one?

A Berger Picard (or Picardy Shepherd) is one of the rarest domesticated dogs in the world and is considered to be the oldest of the French Sheepdogs. Most people these days only know of this breed due to the 2005 movie starring a Berger Picard, Because of Winn Dixie.

This lanky, shaggy pooch has even remained relatively anonymous within kennel clubs, only gaining recognition by the AKC in 2015 as part of the herding group.

Berger Picard Puppies – Before You Bring One Home…

Other than their cost, it’s a mystery as to why these dogs aren’t more popular. Picardy Shepherds are low maintenance herding dogs making them easy to train and easily cared for. And if you’re looking for a quiet dog, the Berger Picard is an amazing choice. They seldom bark, reserving themselves for only when it’s truly needed. They are protective of their families, however, and will be very watchful around strangers. The only real intensive requirement they have is that they need to have an active lifestyle typical of other herding dogs.

3 Little-Known Facts About the Berger Picard

1. After World War I and II, the Berger Picard Almost Went Extinct

After the World Wars, food rations were in short demand. And it became very hard to feed larger dogs. And this meant the Berger Picards could no longer be properly cared for. Thankfully, a handful of the breed weathered the storm, and they are now beginning to make a comeback.

2. Because of Winn Dixie gave the Berger Picard a Much Needed Surge in Popularity

In the 2005 family film, Because of Winn Dixie, a little girl befriends a dog found inside of a supermarket. This dog named Winn Dixie (after the supermarket it was found in) was a Berger Picard puppy. After the movie’s release, the demand for Picards shot up drastically and led to a boom in their breeding.

3. Picardy Shepherds are among the Oldest of French Sheepdogs

These dogs are believed to have originally come to France around 800 A.D. with the arrival of the Celts. This makes them among the oldest sheepdogs not only in France but around the world.

Temperament & Intelligence of the Berger Picard 🧠

These sheepdogs are very reminiscent of others like them. They have very even-temperaments when they mature. However, they can be mischievous little rascals when they are still puppies. They’re a very confident breed as well — a trait found in most herding dogs.

If properly raised, these can be among the best family dogs. They’re very affectionate with their families and extremely loyal. Berger Picards are even great with children, provided that the latter are taught how to treat the dog with respect. Picardy Shepherds are very playful and require lots of stimulation. Having a friend to play with that they can trust will meet their needs and provide your child with a protector for life.

This breed can actually get along fairly well with other dogs provided they aren’t pushed around. Berger Picards are proud, confident working dogs and don’t take too kindly to being bullied. Other than that, they will happily accept a playmate and companion.

However, when it comes to smaller animals such as cats or other little furballs, you might want to keep the two separate. Berger Picards have a notoriously high prey drive which could spell trouble for the other smaller animals.

Things to Know When Owning a Berger Picard:

Berger Picards are great dogs, but there are some things you need to keep in mind when raising one.

These pups aren’t small by any means, and they’re extremely active. This means that they’re going to need a very high caloric intake in order to provide the right amount of energy they need. Three to four cups of high-quality dog food will do the trick, spread out between a few meals throughout the day.

As these dogs age, they’ll slow down their pace somewhat and require less sustenance. Be sure to check in with your vet regularly about food intake suggestions.

An active, exercised Berger Picard is a happy Berger Picard. A fully grown dog will need around two hours of exercise every single day — and that’s active stimulating exercise too. They don’t want to just be left alone in a large yard.

As a matter of fact, if you go out with them, there’s a good chance they’ll stay close to you no matter how large your yard is. They don’t really have too much wanderlust and prefer to be engaged with their families or working.

Being a herding sheepdog, Berger Picards are a highly intelligent breed and train relatively easily. It’s naturally ingrained within them to take charge and create order where there isn’t. But they’re also great at following commands.

Due to their intelligence, some Berger Picard puppies may have a stubborn streak when first trying to train them. However, that’s easily overcome with positive reinforcement.

Berger Picards are deceptively easy to groom. You would think that with all that long shaggy fur you would need to pay very close attention to grooming requirements. However, you’d be mistaken. They only really need a quick wipe down and a monthly combing — unless they get into something smelly.  Also, they are very low shedders, making them great for dog lovers with allergies.

The problem with bringing a new dog into your household is learning all of the associated medical risks that they may potentially face. However, with the Berger Picard, you’ll be happy to hear that they’re one of the most robust dog breeds around. They aren’t generally a sickly breed.

But there are a few things that you should be aware of. Because of their long, lanky bone structure, they can be prone to arthritis or other joint problems. This is not uncommon for dogs of this build. To help minimize joint ailments, be sure to let your Berger Picard take lots of breaks during exercise, especially during their growing phase.

Another concern that Picardy Shepherds suffer from is a disease called progressive retinal atrophy. It’s an ailment that affects the eyes of the breed and can eventually lead to blindness.

Male Berger Picards tend to be larger, standing up to 5 inches taller than their female counterparts. Other than that, their personalities are fairly similar. The unique characteristics of your pup will be based more on their parents than on their sex.

Berger Picards are a true definition of man’s best friend. They’re stoic and strong, yet playful and loving. The breed makes for an excellent family dog and protector for the younger ones of your family. They can be a bit mischievous at first, but that’s all part of their charm.

And for a shaggy dog, they require minimal grooming and don’t really shed. The biggest factor you’ll have to consider is if you can dedicate enough time to ensure they get their daily exercise requirement. Without it, they can grow bored. And boredom equates to destructive behaviors.

But if you’ve got the time to allot, then this is a perfect dog breed for you.

Labrador Retriever vs Golden Retriever: Which Breed is Best for You?