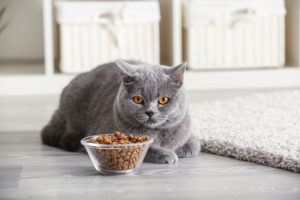 This brand is well-known for its safety. It has few recalls each year, despite producing much more cat food than most other brands out there. Statistically, it has one of the lowest recall rates.

For the most part, its food is also extremely inexpensive. Many people consider it a budget cat food brand, which is true to an extent. While it does produce higher-quality options, it seems to focus on low-cost food.

In this article, we review the best Purina cat foods currently on the market.

A Quick Comparison of Our Favorites (2022)

If you’re looking for the best overall cat food, Purina One Sensitive Skin & Stomach Dry Cat Food is easily it. This product isn’t too expensive, and it provides a range of good ingredients.

The first ingredient is turkey, followed by chicken by-product meal. Turkey is a good source of protein. Most cats would love to gobble up a whole turkey if they could. However, chicken by-products are less than stellar. Their inclusion is one way that Purina keeps the price down, though.

This formula is quite high in protein at 34%. This percentage is far higher than most other cat foods out there, making this food particularly great for active felines.

As the name suggests, this recipe is specifically designed for sensitive felines. It includes antioxidants and omega fatty acids for this purpose. While felines with sensitive stomachs and skin will thrive on these ingredients, they are ideal for all cats.

While Cat Chow Naturals Original Dry Cat Food isn’t the cheapest cat food that Purina creates, it is the best Purina cat food for the money. If you’re looking for value, this food fits the bill.

It includes chicken as the first ingredient, a solid option for all cats. However, the rest of the ingredient list is a bit sub-par.

For instance, corn gluten meal is included as the second ingredient. This ingredient adds plenty of plant-based protein to the formula, something important to keep in mind when looking at the overall protein content of the food.

This food is quite high in protein overall, which is typically a good sign. However, much of this protein comes from plant-based sources, not meat. Don’t mistake high protein content for high meat content.

Omega fatty acids are included for healthy skin and coat. This formula is also free from artificial flavors and preservatives.

For those who only want the best for their felines, we recommend the Purina Beyond Wild Salmon Canned Cat Food. This recipe includes the highest quality ingredients out of any other cat food on this list.

It features salmon and chicken as the first two ingredients. As a wet food, it has fish broth for added moisture. This is far better than just water alone, as it includes extra nutrients.

There is no corn, wheat, or soy in this recipe. It is also completely grain-free. In fact, there are few ingredients in this recipe at all, and most of them are animal-based.

This recipe is also one of the few that doesn’t include by-product meals and other less-than-stellar ingredients.

It does not fall into the category of “budget” food, though. It is one of the most expensive foods that Purina creates, though it isn’t as expensive as some other cat foods on the market.

Many cats thrive on wet cat food because of the added moisture. It also tends to be tastier and more appealing to picky felines. Fancy Feast Variety Pack Canned Cat Food is one of the more popular wet cat foods out there.

As you’d expect from Purina, this food is quite inexpensive. It is a fraction of the price compared to some other cat foods on the market.

The ingredients included are quite decent. They aren’t the best, but they are fine for most cats. For instance, the turkey flavor has poultry broth, turkey, and liver as the first three ingredients.

However, wheat gluten and meat by-products show up later on the list. Both of these are considerably lower quality than we would like. But they do help keep the overall cost of the food down.

As a wet food option, Friskies Shreds in Gravy Variety Pack Canned Cat Food is a solid choice. It includes a variety of animal products as the first few ingredients, including both chicken and beef.

Water is added to improve the moisture content, but it isn’t quite as good an option as broth, which would add vitamins, minerals, and taste to the food.

Many cats do enjoy the texture of this food. The shredded texture is a bit different from most foods out there, so this may be a good option for pickier felines.

That said, some of these ingredients are lower quality. For instance, wheat gluten is included, which provides extra protein. However, this protein is plant-based, not meat-based.

Kittens need special nutrition to grow properly. Their protein and fat needs are higher than an adult’s, for instance. They also thrive from different amounts of vitamins and minerals because they’re growing.

Kitten Chow Nurture Muscle & Brain Development Dry Cat Food is one of Purina’s most popular kitten formulas. However, the ingredient list isn’t amazing. Chicken by-product meal is the first ingredient. While this ingredient isn’t the worst, by-products are notoriously lower quality than whole meat. You just don’t know what part of the animal was used.

That said, this formula does include added nutrients like DHA, which supports vision and brain development. It is higher in protein as well, which is exactly what your feline needs.

Cat Chow Complete Dry Cat Food is quite popular. It is inexpensive and widely available at most stores. In fact, it’s likely one of Purina’s most popular cat foods. It is completely balanced. However, most of the ingredients are sub-par.

Chicken by-product meal is the first ingredient. Compared to others, this meat product is low quality. By-products are the leftovers collected after most of the meat has been collected for human consumption. This ingredient can include basically any part of the chicken.

The rest of the ingredient list is grain products, such as corn and gluten meal. These aren’t exactly the best options for your feline.

This recipe does include omega fatty acids and a variety of different nutrients.

This food isn’t terrible and does provide your feline with what they need. However, it is far from the best.

If your cat has an underlying medical condition, Purina may have a specialty cat food to help. For instance, the Purina Pro Plan Focus Urinary Tract Health Formula Cat Food is specifically designed for cats with urinary tract problems, as the name suggests.

Meat by-products are particularly low quality. By-products can be any part of the animal, and “meat” is an extremely vague ingredient. In other words, this food basically includes mystery meat as the first ingredient.

That said, this formula is complete and provides all the vitamins that your feline needs to thrive. It just does this using lower-quality ingredients.

There also aren’t any particular added ingredients to help with urinary tract infections. The increase in moisture is due to the added water.

Friskies Indoor Delights Dry Cat Food is one of the least expensive foods on the market.

However, it achieves this low price by using low-quality ingredients. For instance, it includes corn as the first ingredient, followed by corn gluten meal. This isn’t what your cat’s diet should mostly consist of.

The only meat ingredient in the first five ingredients is chicken by-product meal. It is the third listing and isn’t a quality meat product. By-products are the parts of the chicken that are typically thrown away, including the feathers, beaks, and similar parts of the animal.

That said, antioxidants and fatty acids are added for extra nutrition. These protect your cat’s overall health and encourage a healthy coat.

Kit & Kaboodle Dry Cat Food is one of the least expensive cat foods on the market. However, it utilizes extremely low-quality ingredients.

The first ingredient is yellow corn, followed by corn gluten meal and soybean meal. All these ingredients are plant-based and are not suitable options for most cats. They provide much of the protein content for the food (which is already low to begin with, at 28%).

This formula is technically complete, but it doesn’t have the best ingredients.

Choosing a Purina recipe for your cat can seem complicated. After all, this company has dozens of different product lines out there, each with its own pros and cons.

However, it doesn’t have to be that complex if you have a bit of background knowledge.

Here, we discuss the most important considerations when purchasing Purina cat food.

Purina is known as a budget cat food company. It keeps its prices low by choosing sub-par ingredients in most cases. That said, they do have many recipes with great ingredients.

Preferably, the ingredient list should contain as many whole meat or meat meals as possible. The first ingredient should be some sort of meat and preferably not by-products.

While by-products aren’t necessarily awful, we just don’t know what they are. They could be any part of the animal that isn’t typically eaten by people, from high-quality organ meats to feathers.

Some grains, fruits, and veggies are okay. In fact, they help keep the cost down, which is why they are widely utilized in Purina cat food. However, you don’t want the bulk of your cat’s food to be yellow corn and gluten.

Cats are obligate carnivores. This means that they must eat meat. They require high levels of protein and fat consumption in their diet.

There is a substantial difference between a cat’s protein needs and a dog’s. While dogs can often thrive on lower-protein diets, cats can’t.

While we would all love to never think about the price of our cat’s food, this typically isn’t practical. Most of us live on a budget, which means that we need to be conscious of what we’re paying to feed our cats.

Luckily, Purina offers many inexpensive brands. However, it keeps the costs down by using lower-quality ingredients.

When purchasing food for your feline, you should buy the most expensive food that you can reasonably afford. The very inexpensive foods often include very low-quality ingredients. Of course, feeding your cat a low-quality but complete diet is better than not feeding them at all.

If you have extra cash to spare, you can upgrade to food that uses whole meat as the first ingredient. Often, these foods are available at a cheap price point, and Purina produces several.

Purina produces a wide variety of cat food brands. It can get a bit overwhelming simply due to the sheer number of options.

Generally speaking, we recommend the Purina One Sensitive Skin & Stomach Dry Cat Food. This food includes quality ingredients and provides high levels of omega fatty acids. The protein content is quite high as well, making it a suitable option for most felines.

Cat Chow Naturals Original Dry Cat Food is a solid budget option. It is much cheaper than most cat foods, but it still includes chicken as the first ingredient. It is also free from artificial flavors and preservatives, which most budget cat foods can’t claim.

Purina Beyond Wild Salmon Canned Cat Food is a quality wet cat food that mostly includes animal protein. It is one of the highest quality foods that Purina creates, but it is also one of the most expensive. For this reason, we recommend it to those who have a bit more money to spend.

We hope that our reviews help you choose the best Purina cat food for your feline.

Can Cats Eat Strawberries? What You Need to Know!

Can Cats Eat Grits? What You Need to Know!