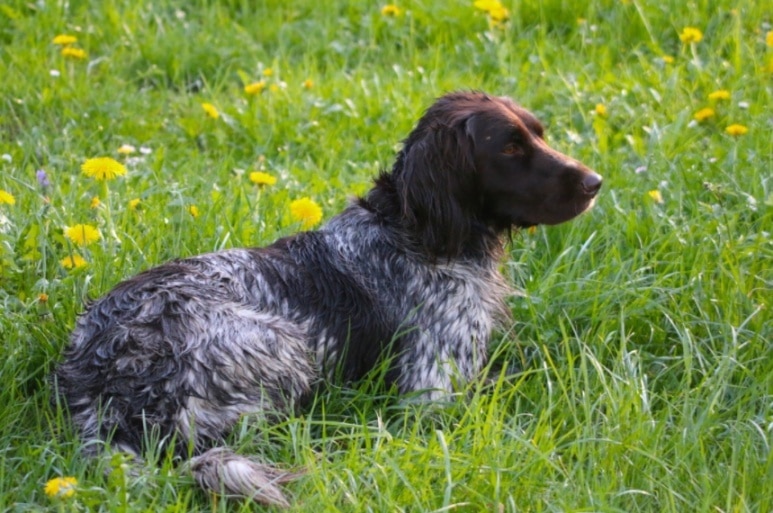 If you are looking for a small but active working dog, you can hardly go wrong with the Blue Spaniel. This dog gets their name from the breeds that crossed to make them: the Australian Cattle Dog, which is blue in color, and the Cocker Spaniel.

The Cocker Spaniel, on the other hand, traces their origins back to the United Kingdom, where they were bred to be a sporting companion. It got the name “Cocker” from its uncanny ability to hunt woodcocks. The official name for this breed was the “English Cocker Spaniel,” as there was an “American Cocker Spaniel” as well. Nonetheless, the two were considered to be the same breed until 1936, even though the American variety tended to be smaller.

They were officially recognized as different breeds in 1936 after American and English breeders began disagreeing on the proper way to go about breeding the dog. While American Cocker Spaniels are popular in the United States, the English variety is more popular across the world.

The Blue Spaniel was bred from both the English and American Cockers, which explains why there are such wide variations in the average weight and height in this breed.

The Blue Spaniel is an intelligent, loving, loyal, and highly energetic animal. Unfortunately, they have yet to be recognized by the AKC. This is why you should familiarize yourself with this breed before purchasing a puppy. This will ensure that you know what to look for when looking for a Blue Spaniel pup. Here is what you need to know about Blue Spaniels.

Blue Spaniel Pups — Before You Get One…

As mentioned, the Blue Spaniel is a mix of the Cocker Spaniel and the Australian Cattle Dog, which were both bred to be working dogs. As a result, the Blue Spaniel has unprecedented levels of energy and intelligence.

Their supreme intelligence makes them easy to train, while their high-energy nature means you will need to provide them with regular, vigorous exercise to keep them happy.

The Blue Spaniel, on average, lives between 10 and 14 years. The weight of this breed ranges between 28 and 45 pounds, while the average height is between 15 and 20 inches. As mentioned, the size of a Blue Spaniel depends on the Cocker Spaniel variety they were bred from, with those from the English variety tending to be larger.

A typical Blue Spaniel looks like a small Australian cattle dog that has Cocker Spaniel features, such as a medium-length coat and floppy ears.

The following is a breakdown of the Blue Spaniel’s attributes:

1. Cocker Spaniels are considered to be one of the smartest dog breeds in the world.

This explains why the Blue Spaniel is extremely intelligent as well.

2. The Australian Cattle Dog is a misunderstood dog breed.

Most people consider them to be a biter. The reality, however, is that they are one of the sweetest dogs you can have, as long as you train them well.

3. The Australian Cattle Dog has some Dalmatian in them.

This explains their spotted coat.

Temperament and Intelligence of the Blue Spaniel 🧠

The Blue Spaniel is extremely intelligent and is a highly sociable dog who enjoys the company of family.

As such, Blue Spaniels are widely regarded as being one of the happy and friendly dogs. Nonetheless, as they are bred to be working dogs, they tend to be quite aggressive during hunting or herding.

These tendencies can also be triggered when the dog is around other animals. Fortunately, socializing the animal early should take care of that flaw, as these canines are quick to understand what is expected of them.

Blue Spaniels are sensitive to routine and environmental changes. The good news is that all they need is your reassurance, as their main goal in life is to please their owner.

If you have owned other dogs, you will quickly learn that the Blue Spaniel requires a great deal of stimulation to keep them content. Fortunately, their eager nature means that they are willing to participate in any activity that you choose for them.

Things to Know When Owning a Blue Spaniel

Are you ready to adopt a Blue Spaniel? Here are a few things that you need to know about this breed.

This dog loves food! In fact, they can eat as much as dogs who are twice their size. This is because they are a high-energy dog. As such, it would be ill-advised to feed a Blue Spaniel the same of food as a similarly statured canine.

The average Blue Spaniel should be fed at least three bowls of high-quality, protein-packed food per day. If your Blue Spaniel is a working dog, meaning that they spend most of their day hunting or herding, you might want to increase their rations.

The Blue Spaniel is crossed from two working dogs. As you can imagine, that trait has been more transferred to the Blue Spaniel, so this dog needs intense, consistent exercise.

This will not only make them happy but will also keep them from developing destructive habits in a bid to expend energy.

Adequate exercise for a Blue Spaniel involves at least one long walk at a moderate pace, coupled with vigorous play either with you or with other dogs. As you can imagine, a Blue Spaniel is not a dog to keep in a small apartment, unless you are looking for trouble. This breed needs a big backyard where they can play to their heart’s content.

When taking out this dog for a walk, you should keep them on a leash, as this breed has an extremely high impulse for wandering.

As mentioned, the Blue Spaniel is an intelligent dog and is responsive to training.

Nonetheless, they can be quite sensitive. As such, avoid getting upset with them during training, as they are quick to pick up on your emotions. Therefore, the best way of training this dog is through positive reinforcement.

Remember, Blue Spaniels love nothing more than making you happy. This is why positive reinforcement goes a long way when training them.

This breed is a moderate shedder. This should come as good news, as it means that these dogs do not require much grooming, with a weekly brush being enough to keep their coat in good condition.

You should also bathe a Blue Spaniel at least once a month. When bathing them, pay close attention to their ears and coat and look for any infections or conditions.

You will also have to brush their teeth daily to keep them in good condition. Clip their nails at least twice a month to prevent painful overgrowth.

While Blue Spaniels are bred from hardy canines, they are still susceptible to certain health conditions. Some can be quite serious, such as hip dysplasia, progressive retinal atrophy, and osteochondritis dissecans.

Hip dysplasia is characterized by the easy dislocation of the hipbone, which can be debilitating for active canines such as Blue Spaniels. Progressive retinal atrophy is a condition that can result in blindness, while osteochondritis dissecans is a disorder that results in the deterioration of the dog’s joints.

Blue Spaniels are also predisposed to minor health conditions, such as deafness and cataracts. Fortunately, these issues tend to occur when the dog is in its twilight years.

Ensure that you take your Blue Spaniel to the vet for regular check-ups to prevent these conditions from developing.

The choice of whether to adopt a male or female Blue Spaniel pup depends entirely on your preferences. If you are looking to breed, females are the way to go. However, if you are looking for the ultimate working dog, males might be better at the job. Females, on the other hand, tend to be more affectionate.

The Blue Spaniel is an intelligent and highly energetic dog who makes for a great companion and worker. This breed is recommended for people with a great deal of space or energy, as this dog needs to be working or exercising for them to be truly happy.

Most importantly, ensure that you get your Blue Spaniel pups from a reputable breeder.  These dogs make for excellent pets, as long as you can take care of them.