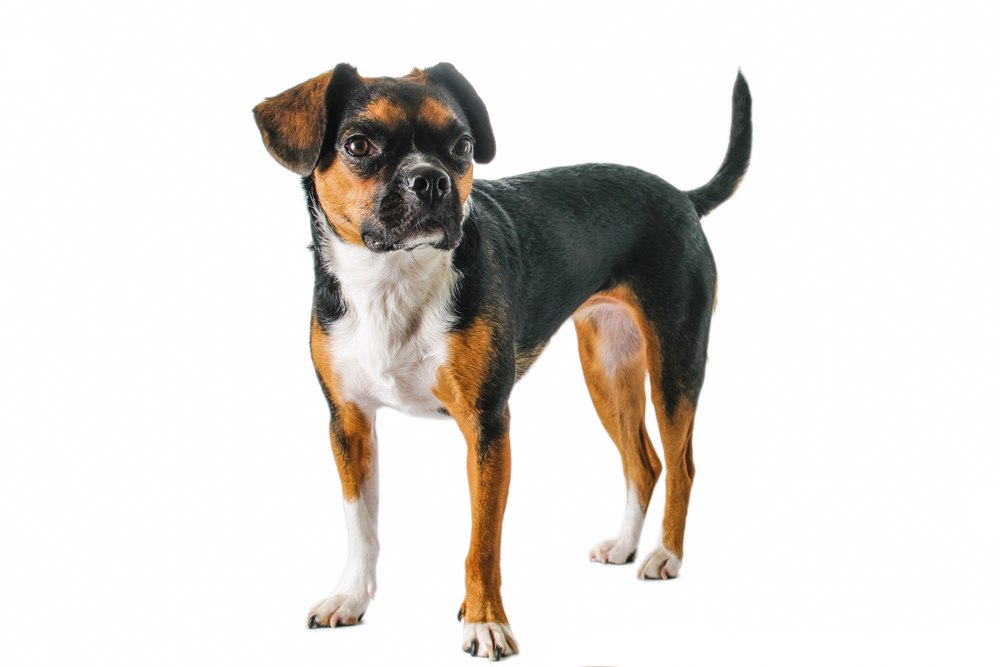 Also known as the Boston Beagle Terrier or Boggle, the Boglen Terrier is a crossbreed between two breeds known for their spunky and playful natures. A designer breed descended from Beagles and Boston Terriers, this high energy dog breed absolutely loves the attention provided by large families and is fantastically warm and receptive to playing with children of all ages.

Stubborn, loyal, and always on the prowl, Boglen Terriers can make surprisingly good watchdogs despite their small statures. With even a small amount of training, these intelligent little dogs can be taught to identify potential dangers and sound a barking alarm.

If you’re thinking of buying or adopting a Boglen Terrier, you may be curious as to their personalities, trainability, and requirements of time and attention. In the following sections, we’ll explore each of these topics as it relates to deciding on whether the Boglen Terrier is the perfect pet for your home.

Boglen Terrier Puppies – Before You Buy…

Bringing any breed of dog into your life requires a large commitment of time, money, and energy, so why not research as much as you can before deciding on which breed best suits your lifestyle? Because the Boglen Terrier is a designer dog – a mix of two purebred dogs – we can learn a lot about its temperament by examining each of its parent breeds in further detail.

Developed primarily for the purpose of hunting hare, the Beagle is a scent hound with a powerfully developed sense of smell. Their noses are so keen, in fact, that they’re often used as detection dogs for airport security!

Intelligent and even-tempered, Beagles are a popular dog breed that is kindly towards familiar faces but may be standoffish with newcomers. They are highly excitable and possess exceptionally high energy levels, often liking nothing more than to run around all day long. Despite their high intelligence, this breed can be hard to train because of their single-minded willfulness.

The Boston Terrier, colloquially named the “American Gentleman”, is known for being highly intelligent and easily trained but occasionally stubborn. Featuring large and prominent eyes, this compact breed has achieved great success as a companion animal across the United States.

While originally bred for fighting and hunting rats, the Boston Terrier has since been refined into a gentle, friendly, and happy-go-lucky dog breed. With even a small amount of socialization, they will get along well with children, adults, other dogs, and small animals.

Combining the attributes of both of its parents, then, the Boglen Terrier is an extremely friendly, high-energy designer dog breed that takes very well to training – but can have difficulties around small animals, due to its inherited prey drive. They’re well suited to living in apartments, as long as you can afford the time to give them the large amounts of exercise they require.

Information on the cost of Boglen Terrier puppies can be hard to come by, as this is not a widely known designer dog breed. On the off chance that you can find one up for adoption, total fees may cost as little as $300 to bring them home. From a breeder, the price of Boglen Terrier Puppies may range from $500 to $1,500, depending on the pedigree of their parents.

1. Wanderlust can be a serious issue for Boglen Terriers.

Wanderlust, a German word for the desire to travel and see new things, is a signature characteristic of this designer dog breed. Given the chance, your Boggle may decide to follow its nose to new adventures without any regard to its health or safety. It’s recommended that you keep a close eye on this breed whenever you’re outdoors together, and a leash is always a necessity.

Unlike their Boston Terrier or Beagle parents, Boglen Terriers can be found with a rare tri-colored coat because of their crossbreeding. Not to be confused with brindle or merle colorations, the tri-colored Boglen Terrier will prominently display three colors clearly in its coat – usually a combination of white, black, and brown.

3. They’re healthier than either of their parents.

Many purebred dogs end up with chronic health problems because of the inbreeding that occurs throughout their history. Thankfully, designer dog breeds can alleviate many of the problems of either parent breed by crossing them with a complementary breed.

In the Boglen Terrier, the short snout of the Boston Terrier is extended, alleviating the breathing problems that shorten their lifespans. And while not a health concern, most Boglen Terriers also lose the Beagle howl that has bothered so many owners. Overall, this mixed breed is a definite win-win!

Temperament & Intelligence of the Boglen Terrier

“Playful” is a great word to describe the Boglen Terrier’s personality, followed shortly thereafter by “goofy” and “stubborn”. They’re a highly intelligent dog breed, but often seem more interested in tracking scents than learning new tricks. But if you’re looking for a dog breed that will keep your family constantly entertained, the Boglen Terrier may be just the dog for you.

Not only are Boglen Terriers good for families, but families are excellent for Boglen Terriers as well! This breed thrives on constant interaction, affection, and attention, and loves to have plenty of humans of all sizes around to play with. If you’ve ever found yourself struggling to keep up with how much energy your children have, the Boglen Terrier can act as an excellent playtime substitute.

Boglen Terriers will get along very well with other dogs of all breeds and sizes if they are socialized at an early age; otherwise, they can tend to be standoffish during first time meetings. Because of their scent hound nature, dogs of this breed may not be a good choice with prey animal pets such as rabbits and birds.

Things to Know When Owning a Boglen Terrier

Is the Boglen Terrier sounding like it might make a good addition to your home? If so, you’ll also need to take the following topics into account before bringing one into your life.

Boglen Terriers are known for being very food-driven animals and will easily overeat if not given a diet in proper amounts. Look for a dry dog food that is formulated for small or active breeds and ask your vet for recommended feeding amounts throughout each stage of your dog’s life cycle.

Because they are at risk of obesity if overfed, keep treats to a minimum (preferably only as a reward for training) and stick to a regular feeding schedule.

Consistent, vigorous exercise is a necessity for the Boglen Terrier, as they possess the high energy levels of both parent breeds. An hour a day of walking or playing in the yard under supervision should be the absolute minimum amount of activity, and it’s not uncommon for Boglen Terrier owners to exercise their dogs for two or more hours per day.

Whenever you are giving your Boglen Terrier its daily exercise, be sure to keep a close eye on it – or better yet, a leash. They are prone to wandering and will often get themselves into trouble as soon as you’re not looking.

Early training as a puppy is essential to a Boglen Terrier’s later development, as their willful natures will begin to assert themselves more fully as they age. Consider enrolling this breed in obedience training as soon as it’s old enough to attend.

Once you’ve properly acclimated your Boglen Terrier as a puppy, the breed’s natural intelligence will make it easy to teach them new tricks and commands.

With their short coats and low shedding, Boglen Terriers are quite easy to groom. Brushing them once a week will usually suffice to keep their coats looking shiny and healthy.

Be advised, however, that this breed is prone to both dry skin and difficulty handling cold temperatures. It’s best to keep them indoors during any extreme weather conditions, such as noon in the summer or night time during the winter.

Due to the mixing of their genetic traits, Boglen Terriers enjoy better health than either of their parent breeds. They are still prone, however, to the following conditions:

Taking after their parent breeds, Boglen Terriers tend to display more home-oriented tendencies as females, and a more adventurous spirit in males. Individual personalities can vary widely, however, and both sexes will show remarkably similar traits if they are neutered and spayed when young.

A marked improvement on the health and behavior problems of the Boston Terrier and Beagle respectively, the Boglen Terrier is a wonderfully friendly little ball of energy that will thrive in any home where it can receive plenty of attention. If you’ve ever wanted an adorably goofy little watchdog for your home, this designer dog breed may very well be the perfect match.