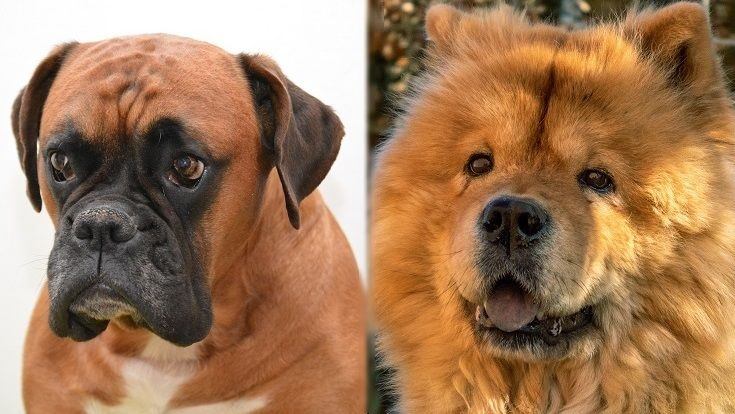 The charm and silliness of the Boxer meets the dignity and intelligence of the Chow Chow in this intensely loyal dog. Boxer Chows have a restrained playfulness and quiet confidence. They are serious about protecting their family but won’t wake the neighbors with incessant barking!

Let’s take a gander at the history of each parent breed for a fuller picture of this novel hybrid breed.

Boxers have been in Europe since around the 16th century. It is believed that they are the descendants of Tibetan Mastiffs, fighting dogs and Bulldogs. They were originally bred to work with hunters but were also used for bull-baiting and fighting until blood sports were outlawed. In fact, their name comes from the way they used their forelegs when fighting. Boxers have been used as military and police dogs, performers, as well as companions. They came to the United States during World War II and have been a beloved breed since.

The Chow Chow was originally bred in Asia. Some dog historians think they came about from a mixing of the Tibetan Mastiff and the Samoyed. They were originally used as hunting companions for partridge and pheasant. This breed became popular in Europe during the Victorian era and made its way to the United States around 1890.

Silky furred, perky, and curly-tailed, the Boxer Chow puppy is sure to melt your heart as soon as you meet one. You can expect your soft friend to start out a little rowdy and goofy but grow in composure as they age. Few are as perfect for the position of companion guard dog as the Boxer Chow.

They do require a dog experienced owner that can provide structure and training. But the reward for you and your pup’s diligence is a loyal, cheerful, self-possessed canine family member who would do anything for you!

However, if you have the patience for one of these pups to be available for adoption you will save yourself a considerable amount of money — not to mention give a dog that is down on their luck a new home!

Adoption fees often range from $200 to $350 and include up-to-date shots in the price.

1. The Chow Chow May Have Been Named by English Sailors

When many some Americans hear the words “chow chow” they think of the sweet, sour medley that is the Southern sandwich condiment. Oddly, that isn’t far off from the name behind this distinguished dog breed!

“Chow-chow” used to be a pidgin English slang phrase meaning mixed cargo or “this and that.” Many theorize that Chow Chow dogs were first brought to Europe on cargo ships. So, these noble canines probably got their name from a busy and inattentive sailor, almost by mistake.

2. Boxers are Sometimes Called the Peter Pan of Dogs

This breed is famed for its playfulness and boundless energy. And most Boxers retain a certain puppy-like goofiness for all of their lives.

But it isn’t just their sweet, “never grow up” attitude that has named these pups the Peter Pan of canines. Like one of the famed Lost Boys, Boxers mature significantly more slowly than most breeds. A Boxer is not considered fully mature until they are at least 3 years of age.

3. The Boxer Chow Gets the Best of Both Parents.

In the case of the Boxer Chow, the difference in personality between the parent breeds couldn’t be bigger. But lucky Boxer Chow owners know that this hybridization matches and improves upon each of the parents.

Chow Chows are well known as aloof, reserved dogs that do not often get along with other animals. Mix in the Boxer’s playful nature and friendly affection, however, and you get a much mellower canine! Quiet, but incredibly loving and good with children.

And as for Boxers, they can sometimes be overly friendly! We know it doesn’t sound like much of a problem, but we bet you’d be pretty miffed if your Boxer made best friends with a burglar. The added wariness of the Chow Chow makes the Boxer Chow not just friendly, but attentive and smart.

Boxer Chows are protective, quiet, and loving creatures that can adapt to almost any living situation. Given enough exercise, they make great city, town, or country canines. And their generally cool natures make them unlikely to keep you and your neighbors awake.

These mellow dogs are aloof, and sometimes even suspicious of strangers. But that detached appraisal melts away when they are with their family.

Boxer Chows need firm training and ample socialization. And with some perseverance, their natural attentiveness and intelligence make them excellent guard dogs and companions.

Are Boxer Chows Good for Families?

Boxer Chows can make excellent family companions! These dogs are protective and affectionate, and incredibly loyal to their family.

And they have a calm intelligence that makes training patience with children a snap. However, prospective owners should note that it may require actual training for a Boxer Chow to be good with children.

Boxer Chows can be loving, but they are not the type to allow rude or rough handling. It is highly advisable to socialize your dog and children with each other and teach both parties how to respect and care for one another.

Do Boxer Chows Get Along with Other Pets?

Boxer Chow dogs are generally genial with other animals but in a slightly removed fashion. They are more likely to wait and see how things turn out rather than rush over to greet a new dog or cat.

There are, of course, plenty of exceptions in either direction. Especially when you factor in the notoriously detached nature of the Chow Chow. For this reason, we deem it highly appropriate to socialize your Boxer Chow with other animals as early as possible.

A post shared by Tucker, Murphy and Molly (@twopoodlesandaboxer)

Things to Know When Owning a Boxer Chow

You may already know that welcoming a canine into your life carries no small responsibility. To help you assess whether you are ready for a Boxer Chow, we’ve made this handy section all about the day-to-day upkeep of these fluffy friends!

To give your Boxer Chow a healthy and happy life, you must provide a well-balanced and nutritionally diverse diet to nourish their body and mind.

That may sound pretty daunting to those of you who aren’t dog nutritionists. But luckily there are many commercially made dog foods that make a healthy doggy diet simple and affordable.

Here are a few tips to keep in mind when perusing the pet food aisle:

The Boxer Chow is a dog with moderate to high exercise needs. Though the activity level varies from dog to dog, the medium size of the Boxer Chow necessitates that your home has an outdoor area surrounded by a fence nearby.

Some of this breed will enjoy playtime with their family to no end, but many are self-sufficient sorts that prefer less interactive exercise. Take your Boxer Chow out on hikes and long walks, go for a run together, or explore a beach for some quality quiet time with your pooch.

If your Boxer Chow has fluffier, longer fur you should avoid taking them out for exercise during the hotter parts of the day. Be sure to give them shade and lots of clean water as well. All that fur protects them in cold weather, but it can become quite dangerous in the direct summer sun.

Boxer Chows are not the easiest of dogs to integrate into a household for an inexperienced owner. Training should be approached with firm authority and positive reinforcement.

Their tendency towards either detachment or foolish antics requires patience. Plus, the long puppyhood of the Boxer will likely mean that your Boxer Chow will take longer to reach mental and physical maturity than most breeds.

However, once you establish communication and respect with your Boxer Chow, you will find them to be especially devoted dogs.

The Boxer Chow has a startling variety of coat types, owing to the mix of super short-haired and super long-haired breeds! So, we’ll give you a few tips for everything in between.

Shorter furred Boxer Chows are moderate shedders. Their coats do well with a couple of weekly brushings, though more are appropriate during their heavy spring shed.

If your Boxer Chow has a double coat, this dense fur needs almost daily attention. These pups will likely be heavy shedders, and you should brush them every day to keep the majority of it out of your nose and morning cereal!

Your Boxer Chow will need their nails, teeth, and ears groomed regularly as well. A weekly ear swabbing and teeth cleaning will help prevent infections and gum disease. And toenails should get an occasional trim so that there are no unintended scratches during playtime or cracked and painful nails.

Boxer Chows, like many hybrid breeds, are generally healthy and hardy dogs. They fare better in cooler weather rather than warm and often have fewer health issues arise than their purebred parents.

Here is a comprehensive list of all the health conditions that you and your veterinarian should be aware of that effect both Boxers and Chow Chows.

Each dog has its own unique personality. But you can generally count on male Boxer Chows to be larger and more prone to dominance-related sexual behaviors (e.g., humping, territory marking).

So, is the Boxer Chow the pooch for you?

If you are inexperienced with dogs or unwilling to learn how to provide firm guidance for an intelligent canine, then probably not. But if you don’t mind a dog that requires a bit more structure and time to get to know them, then the Boxer Chow can be one of the most loyal and loving companions in the world!