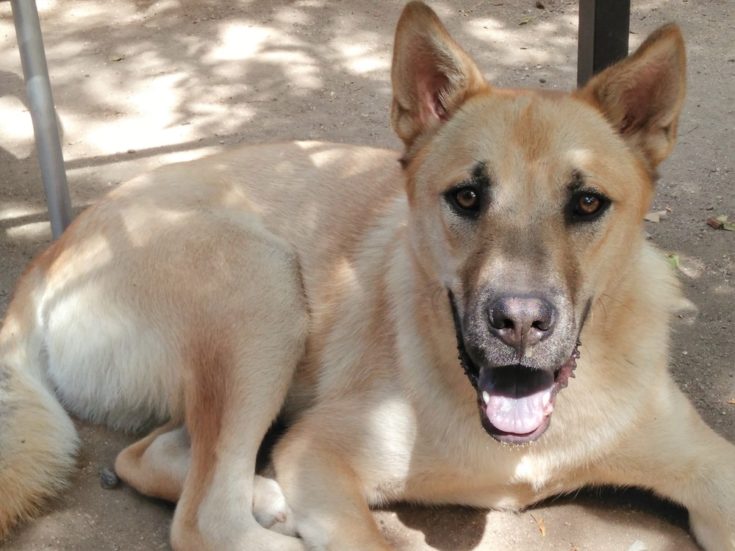 Boxskies are packed full of energy and character, so if you’re tempted to buy one of these charismatic pups, you’ll need to make sure that you can keep up with them! Boxskies are a hybrid breed, created by crossing a Boxer and a Siberian Husky. They combine some of the best qualities of each breed, while also being completely individual in terms of appearance.

While Boxskies are adorable to look at, they are not a breed that’s going to suit everyone. Their extreme loyalty to their families might seem sweet when they’re a pup, but if they’re not carefully socialized, this can turn into a tendency to be overly watchful and territorial as your pup grows up. As they end up being big and powerful dogs, that’s no laughing matter!

You may not be as familiar with Boxskies as some of the other hybrid breeds out there, so if they’ve caught your eye, this guide is packed full of all the details about these awesome dogs. You never know, perhaps they’ll be the perfect breed for you and your family!

Boxsky Puppies — Before You Get One…

When visiting a litter of adorable pups, whatever the breed, it can be a real test of willpower to leave without a puppy. But before you do, remember that not every breed is going to suit every family. It pays to do your research first!

Boxskies are gorgeous-looking dogs, thanks to their combination of smooth Boxer coats and upright Husky ears. Pups often inherit the bright blue eyes of their Siberian Husky parent, and this just adds to the cuteness factor. Despite all that cuteness, Boxskies grow up to be incredibly intelligent and active dogs. This combination may be too much for first-time dog owners.

They require plenty of socialization when they’re young to make sure their instinct to protect their pack doesn’t become a problem as they mature. Boxskies are also a vocal breed, who will use their loud voice to warn you of perceived danger. Or, they will simply indulge in a good old howling session when you’re out of the house!

1. Siberian Huskies were bred to run

Siberian Huskies have evolved into one of the world’s finest sledding dogs. They’re capable of running huge distances per day. Their popularity exploded after the Nome Serum Run of 1925, where several teams of huskies led by their mushers, including Leonhard Seppala, managed to travel 658 miles in just under six days. Seppala and his team, including the lead dog, Togo, completed most of the journey, making a trip of 264 miles. It was Balto, the lead dog of the final leg who gained the fame for this run, and there’s even a statue of him in New York City’s Central Park. Togo and Seppala’s amazing achievement was made into the Disney film, “Togo,” in 2019.

The Boxer heritage includes the Old English Bulldog and German Bullenbeisser. Boxers served in both World Wars as guard dogs, attack dogs, and messenger dogs. After the Second World War, plenty of Boxers were taken back to America by U.S. soldiers, and their popularity soared.

3. You never know what you’ll get with a Boxsky

As with any hybrid breed, Boxsky puppies will end up with a mixture of both personality and appearance traits from both parent breeds. Because crossing two purebred dog breeds is never an exact science, you won’t know exactly which traits your puppy will inherit from each parent.

Your Boxsky pup may take strongly after their Boxer parent in terms of looks, but behave more like a Siberian Husky when it comes to their temperament. That means if you’re considering any hybrid breed dog, you need to be familiar with both parent breeds and be sure that you can cope with any of their typical behaviors.

Temperament & Intelligence of the Boxsky 🧠

Boxskies are intelligent, and they might be a bit too much for first-time dog owners to cope with! They are also extremely energetic and enthusiastic, so you’ll need to come up with plenty of activities to challenge these pups both mentally and physically.

They’re not afraid to be vocal if they feel like they’re not getting enough attention, something that needs careful training so it doesn’t become excessive, especially if you like your neighbors! Boxskies do tend to guard their families and may become overly territorial if not trained at a young age.

They also love the company of their humans and will want to be with their families as often as possible. Their energy and training requirements mean you’re going to need to invest plenty of time every day to make sure your dog is well exercised before you get a chance to sit down! They’ll certainly let you know if you forget their daily walk.

Boxskies have the potential to make wonderful family pets, with a few exceptions. Their large size and exuberant natures mean they might be too enthusiastic for small children to be around. One energetic bounce from a Boxsky, and a small child can easily get knocked over. So, if you do have little kids, you might want to hold off until they’re a little older.

With that said, they do make fabulous dogs for older children, especially active ones! Boxskies will always be up for playing in the backyard or going for a walk to the local park.

Another thing to note is that Boxskies do usually have a high shedding coat, thanks to their Siberian Husky parent. That means they’re not a great choice for families with allergies, as you may find that all that dog hair can cause a flare-up.

Generally, Boxskies should get along well with other pets, as long as you’re careful to introduce them slowly. Make sure the initial meetings between new pets are supervised and carried out somewhere safe and enclosed.

Things to Know When Owning a Boxsky

Owning a Boxsky has the potential to fill your life with joy and laughter, not to mention long walks! But before you commit yourself to any breed, it’s important to make sure that you can meet their requirements. The information below should help you to decide if this is the perfect breed for you.

Boxskies are an extremely energetic breed, so you’ll want to choose a good quality food with a high percentage of protein to help your dog develop and maintain lean muscle mass. The quantities can be adjusted depending on the time of year and how much exercise your dog has.

Here’s where you’re going to have to invest a significant amount of time and energy! Boxskies are incredibly energetic and will become frustrated if not given plenty of time to exercise. These dogs won’t cope well if they miss a walk.

Around 90 minutes per day would be the bare minimum you should expect to spend exercising these dogs once they’re fully grown. A daily walk of 2 miles, plus a training session and free time in the backyard, will make sure your Boxsky is happy and worn out.

You’ll need a securely fenced yard, as Boxskies can be known to escape either by digging or jumping their way out! It’s also best to walk them on a leash, as their recall when distracted by something interesting is not the best. Your Boxsky pup is likely to inherit their Siberian Husky’s parent’s love of running, and if they decide to take off, there won’t be much you can to do get them back!

Boxskies are extremely intelligent and will enjoy regular training sessions with their owners. This is a great way to mentally stretch your dog, making sure their brains are as well exercised as their bodies.

Effective puppy training is essential with this breed, and it’s not something you should skip. Boxskies can become territorial and overly protective of their families if they’re not socialized when they’re young. That can lead to an older dog who is wary of strangers. And as Boxskies are well known to be vocal, they will certainly let you know if they don’t like someone, be that a person or another dog.

Most Boxskies end up with a short, dense coat. This does shed, especially as they change coats in spring and autumn. You’ll want to groom your Boxsky once a day to remove any shed hair.

During shedding season, a de-shedding brush will help clean out their coat, and you’ll most likely want to do this every day.

While brushing your pup, it’s a good idea to get into the habit of checking their nails, ears, and teeth. You shouldn’t need to trim their nails too often, as they should self-trim to a certain degree, especially if you do a great deal of walking on harder surfaces.

On the whole, the Boxsky is a healthy breed. As a hybrid, they’re less likely to inherit many of the health conditions that the purebred parents can suffer from. It’s important to familiarize yourself with these, though, just in case:

If you’re now convinced that a Boxsky dog may be the perfect new addition to your family, you might think that you now have to choose between a girl or boy pup.

We recommend leaving this decision until you visit the litter of pups because you might find that you don’t need to decide at all! Many personality traits are completely unlinked to the sex of each puppy, so you may find yourself drawn to a male pup when you were expecting to pick a female. Treat each pup as an individual, see which one you genuinely prefer, and find out their sex later!

Many behavioral issues caused by hormones, which can concern some owners, will be almost entirely removed by having your pup spayed or neutered at the appropriate time.

The Boxsky certainly isn’t one of the better known hybrid breeds, but plenty is going for these enthusiastic dogs. They love spending time with their families and are loyal and observant hounds. They’re usually healthy and fairly low maintenance when it comes to feeding time.

You will have to make sure they get plenty of exercise every day. This is not a breed that will be happy to spend all day indoors, and you’ll be setting yourself up for a bad situation if you don’t exercise these dogs enough. They are intelligent enough to find multiple escape points from a seemingly secure backyard.

If you’re an active family with older children who love to spend plenty of time outside, you may just find that the enthusiastic and loyal Boxsky is the perfect addition to your family.