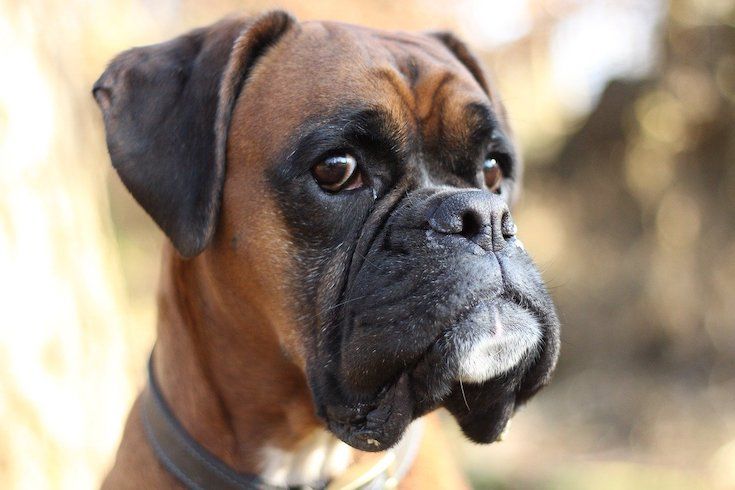 Boxers are smart and energetic, with a fearless personality and a playful spirit. If you’ve just adopted one, lucky you! But now comes the hard part: deciding what to name your brave puppy.

That’s where this list comes in! We’ve gathered over 100 classic and funny dog names that will be just right for your Boxer. And if you’re looking for a famous boxer namesake, scroll down! From Mike Tyson to Jack Dempsey, we’ve put together a great list.

You might be looking for a name that’s just a fresh and adorable as your new Boxer puppy. This next list has a few that might typically only seem fitting for a pup, but you shouldn’t knock them as they will grow perfectly with your pup mature into their wise dog years.

The Boxer’s name comes from their innate tendencies of standing on their hind legs during play and using their front paws to, well, box. So, if you’re a boxing fan and you’ve adopted a Boxer pup, what better namesake for your pup than a famous boxer? There are plenty to choose from, but the following are the favorites out there.

Name your dog Mike or Tyson in honor of the famous world heavyweight champion.

Muhammad Ali, whose nickname is “The Greatest,” was one of the world’s best boxers. He’s also known for coining the iconic phrase “Float like a butterfly, sting like a bee.”

Sugar Ray was a powerful welterweight and middleweight boxer — with a great name, to boot!

Jack Dempsey was a heavyweight champion way back in the 1910s and 20s. Give your boxer a name that looks back at the so-called “Golden Age of Sport”!

If those individuals weren’t quite the perfect match, you might be interested in a name from the following list. One of these would be incredibly unique while keeping true to your baby boxers’ theme!

Finding the Right Name for Your Boxer

Have you found the perfect name for your playful Boxer? We know it can be hard to choose, but whether you go for something classic like Maggie, powerful like Bruno, or funny like Knockout, your dog is sure to love their new name.

Don’t stress yourself out over it either. Narrow your list and say the names aloud a number of times, in cool and calm voices, and the stern voice as well. If you trust your instinct, you’ll know the name after you say it out loud a few times.

Tips for Naming Your Boxer

If you’re having a bit of trouble landing on the perfect name – we are still here to help! Below we have created a few helpful tips for you to consider while rummaging through dozens of names.

But, if you’re still stumped, that’s okay. We’ve blocked the punch with dozens of other dog name lists for you to sift through. Try out one of the lists below: