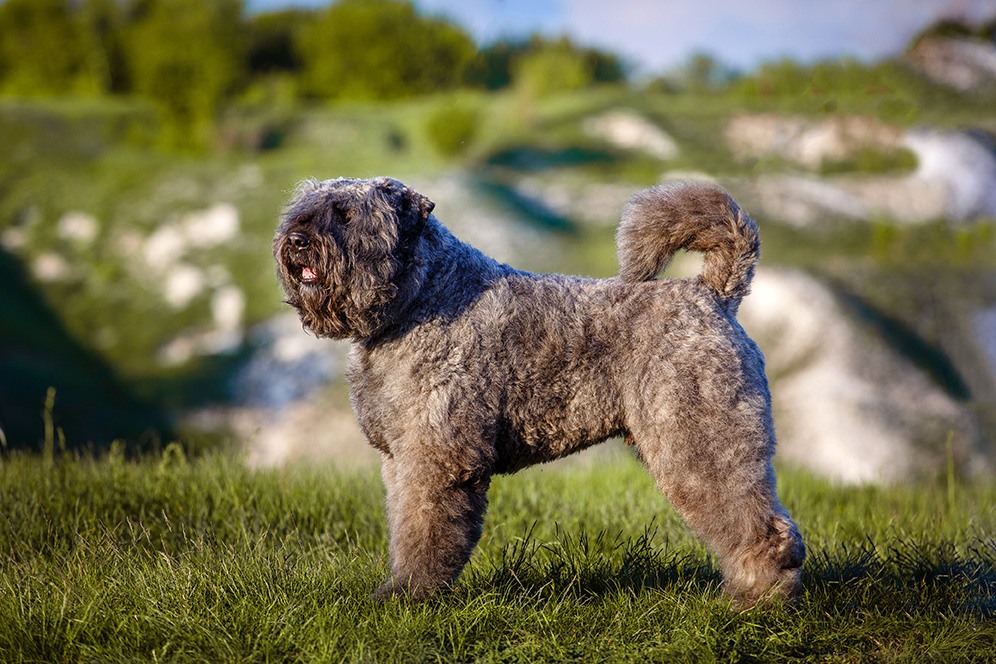 Why would you want a dog that looks more like a sheep than your typical mutt? Well, they’re incredibly fluffy, for one thing. The breeds below are also loving, loyal, and many of them shed less than your average dog, making them a great choice for homes with allergy issues.

Plus, it’s always fun to watch how neighbors react when they think you’re walking a lamb down the street on a leash.

The 4 Dog Breeds that Look Like Sheep & Lambs are:

These British pups were originally bred to hunt down vermin, which seems an odd waste of their talents, as they can blend in perfectly with a herd of sheep. They’re not especially big, weighing only around 20 pounds, so they’re only able to imitate baby lambs.

While their coat closely resembles sheep’s wool, it’s much more coarse. They’re not prone to shedding, but they still need plenty of regular maintenance or else their coat starts to lose its luster. Fortunately, their fur isn’t prone to trapping odors, even if you go a few weeks between grooming them.

Despite the fact that they look like sweet little lambs, these tiny dogs actually love fighting, and they have no preference between scrapping with a large rat or another pup. They’re typically not suitable for multi-dog households for this reason, although they’re usually friendly to people.

Also known as the Hungarian Sheepdog, this pooch looks like a cross between a sheep and a mop. They’re an ancient breed, dating back to at least the 12th century C.E., when they helped the nomadic Cuman people tend their flocks.

While the resemblance to sheep may not be as apparent when looking at a Komondor standing alone, it’s amazing how well they blend in with the rest of the flock. This gives them the element of surprise in a scrap, and that can be extremely useful, considering they often had to fend off bears and wolves.

Today, Komondors are incredibly loyal and loving to their families, but they need plenty of training to keep their protective instincts in check. Luckily, they don’t tend to bite or maul, preferring to simply knock intruders over and stand on them until help arrives.

These pups are big and fluffy like sheep, but with one important distinction: their fur is typically very dark. This lets them blend into the flock to a certain extent, while still being easy for you to pick out of the crowd in a hurry.

However, they were traditionally used for herding cattle rather than sheep, and they’re fearless enough to keep the larger animals in line. That same fearlessness led to them being used by the French and Belgian military in both world wars, a fact that almost led to the breed’s demise.

They especially resemble sheep when their tails are docked, as they often are to keep them from getting caught in carts or trampled on by cattle. They make sweet pets and are protective of children, but they will often try to assert dominance in humans if not trained well.

You’re likely familiar with this breed thanks to old Looney Tunes cartoons, in which a dedicated sheepdog had to protect his flock from the efforts of a determined wolf. In real life, these dogs really did have to fend off wolves, although they seldom used a single right hook to do so.

These dogs are certainly large, often weighing in the neighborhood of 100 pounds, but their fluffy coats usually make them seem bigger than they actually are. However, all that hair requires quite a bit of maintenance, and owners should expect to devote a few hours a week to caring for their coats.

Old English Sheepdogs tend to be extremely affable mutts, and get along with both children and other animals (although it’s probably best if you don’t have a wolf in the house — old habits die hard). They’re extremely prone to separation anxiety, though, so don’t get one if you plan to just stick him in the backyard alone.

Mutts Dressed Up as Lambs

Unless you live on a farm, chances are you’ll never have the opportunity to own a lamb as a pet. The dogs on this list can get you relatively close to that goal, however, as they can fool casual observers into thinking that they’re sheep.

Despite their appearance, though, these animals are dogs through and through. As such, they can make great pets, provided you’re willing to put in the necessary work training and socializing them.

Just try to resist the urge to make a sweater out of all the fur they leave lying around.