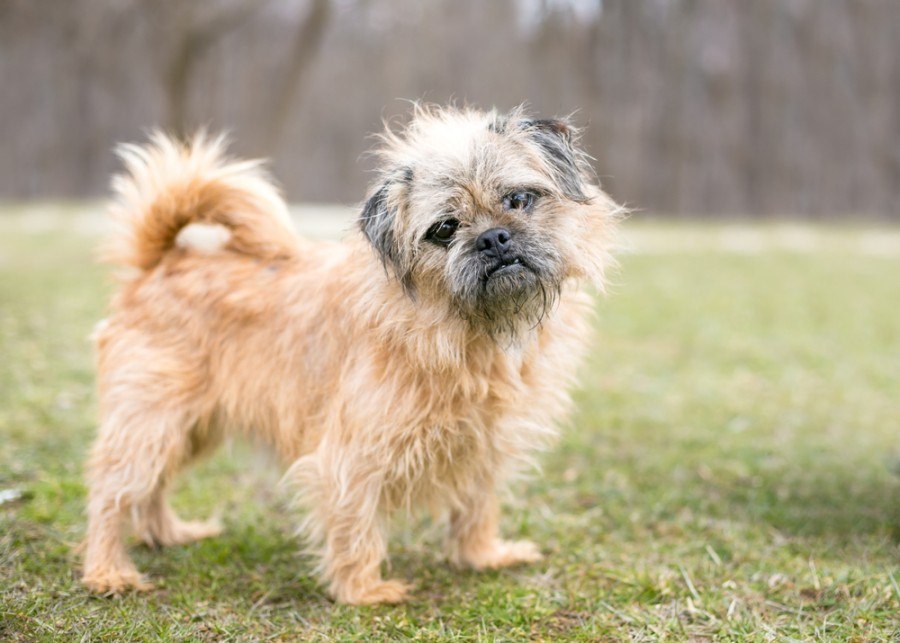 A Brug is a mix between a Brussels Griffon and Pug. This is a smaller breed that is somewhat rare. Because it is a mixed breed, this breed has likely been occurring for as long as Pugs and Brussels Griffons have been in contact with each other. However, finding this mixed breed being actively bred is a bit rarer.

Because of their small size, they are often best for small apartments and city living. They are companion dogs through-and-through, enjoying their family and affection. They are friendly and have zero fear, which can sometimes get them in trouble.

Below, we’ll discuss the ends and outs of this dog breed. However, we need to point out that this is a mixed breed, which means that you never know exactly what you’re going to get. Unlike purebred dogs, their traits are far less set in stone. You don’t know what they’re going to inherit from what parents.

Still, there are a few traits that are decently common among all Brugs.

Brug Puppies – Before You Buy…

Brugs act very similar to other small, companion dogs. They love people and want to be around their family. They don’t make particularly useful guard dogs and don’t have any protection instincts, making them generally pretty friendly. Of course, early socialization is still required, but, for the most part, they are pretty easygoing.

They are relatively high-energy, however. They need quite a bit of exercise. However, their small size makes it easy to exercise them in tight spaces and on short walks. They have short legs, so they usually don’t require that extensive walks.

With that said, because these dogs were bred to be companions, they are a bit lacking in the brains department. They take lots of patience to train, simply because it takes them a bit to figure out what you want them to do.

What’s the Price of Brug Puppies?

Brug puppies are smaller dogs, so they typically cost between $300 to $1,000. Smaller dogs usually cost less than big dogs, simply because breeding the dogs takes less money. You don’t have to spend as much on food, for instance, because small dogs eat less than large dogs.

However, the price of Brug puppies in particular varies quite a bit. It is difficult to find a breeder that breeds these mixed breeds in particular. Instead, it is much more common to find “oopsy” puppies for sale. The price breeders charge for their puppies varies widely, so you’ll need to check your local prices.

Not all Brugs are the same in the least. Because this is a mixed breed, you never exactly know which traits a particular puppy is going to inherit. Some Brugs look and act just like a Pug, while others may act like a mix between both their parents.

2. They are healthier than their parents.

While this mixed breed has likely occurred for quite a while, it was only recently named and described. For a long time, this breed was likely characterized as just a mixed breed.

Temperament & Intelligence of the Brug

The Burg is your average companion dog. They love their family and are very affectionate. However, because they are smaller, they are not necessarily good choices for families with children. They can get hurt by rambunctious children quite quickly, which can cause them to snap.

They require lots of socialization, or they may become intolerant of new situations or people. However, when appropriately socialized, they are very friendly and consider every stranger to be a friend. They are not particularly useful alert or guard dogs because of this, though.

Sometimes, these dogs can be a bit possessive, similarly to other small dogs. However, socialization can help in this instance as well.

Burg dogs are not incredibly intelligent. They are loyal enough to take easily to training, but may need a little bit of time to figure out what exactly you want. Patience is required to train them thoroughly. They respond well to praise; you have to give them a bit of time to figure it out!

Overall, these dogs are happy and playful. They do good in apartments and in the city.

However, for other families, these dogs do make good companions. They are not one-people dogs and will readily bond with everyone in the family. They love sitting in laps and soaking up attention, which is perfect for families with older children.

With socialization, these dogs can be good companions in most homes.

They get along with other dogs as well and are not incredibly territorial. They may be a bit possessive of their people. However, socialization can help with this tremendously. If they’re around other dogs as a puppy, they will be OK with them as an adult.

Things to Know When Owning a Burg

This Brussels Griffon Pug mix thrive best on a high-protein diet. If they have very short snouts, you may want to consider getting a wet food, since it is often easier for them to eat. A high-quality diet is essential, as they are prone to some diet-related health problems.

However, because they are smaller than most dogs, feeding them a premium diet shouldn’t be too much of a problem. They don’t eat much to begin with and it will take a long time before they get through a case of canned food.

These dogs do not require extensive amounts of exercise, though they are quire hyper. They are very energetic, and this trait often needs to be tempered by regular walks and playtime. They are small, though, and are typically fine as a mostly indoor dog. They can play indoors, but also like short walks.

Just beware: if it is terribly hot outside, they might not do so well if their face is particularly “squished”.

When socialized well, they do fine at the dog park and out-and-about in town. They typically have a very big personality, however, so it is usually a good idea to keep a close eye on them in case their antics cause problems with other dogs.

Of course, these dogs love a fenced-in yard, but it isn’t a requirement in the least. They are perfectly fine hanging out inside with you.

We recommend training them early and often. They will do best with daily training sessions. This will prevent them from forgetting commands in between sessions.

They don’t require much grooming at all. They do shed, but won’t need to be brushed to remove tangles or anything like that. To combat the shedding, you can brush them a few times a week to eliminate the hairs.

They do not need baths very much either – just when they get visibly dirt. If they roll in the mud, a bath would be a good idea. However, they are typically fine without one otherwise.

Like all dogs, they need their teeth brushed and their nails clipped regularly. You can do this or take them to a groomer to have it done. Many have walk-in services for things like nail clipping.

Even though the Burg isn’t prone to as many health conditions as their parents, they are still generally unhealthy. Neither of their parents are particularly health breeds, which means that Burgs likely won’t be very healthy either.

There is not much of a difference between male Burgs and females. Male Burgs may be a slight bigger on some occasions. However, the height of the Burg varies so widely that you probably won’t notice.

Burgs are a newer mixed dog breed. They are small companion dogs that do well in nearly any situation, including small apartments. They are somewhat active, but do fine as an indoor dog as long as they get their walks!

With proper socialization and training, these dogs are excellent in most families. They get along with other animals and pets, including smaller animals.