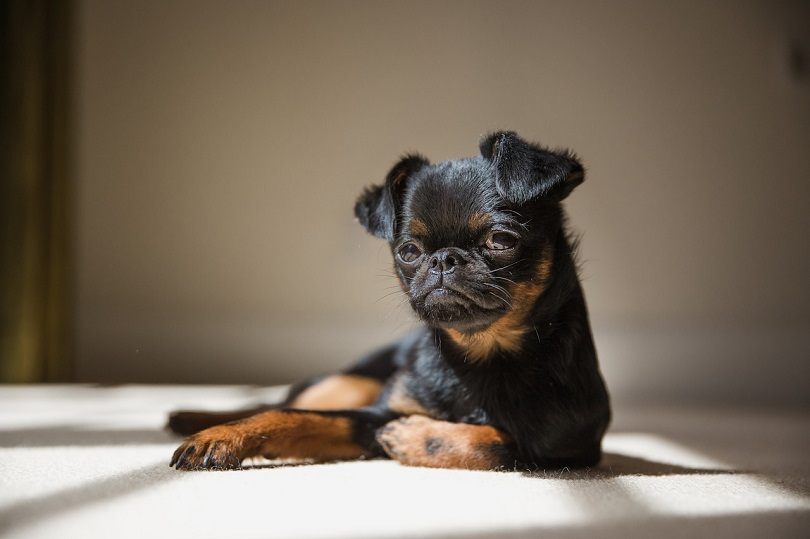 The Brussels Griffon is a purebred dog from Belgium. It’s an intelligent dog with large humanlike eyes, a short body, a short muzzle, and pointy ears. There are two varieties of coats available, a rough coat and a smooth

There are Griffen style dogs in paintings dating to the 1400s, but the Brussels Griffon we know today began in Belgium in the 1800s as a rat dog bred to keep the rodent population under control in horse stables and other places rodents tend to gather.

Brussels Griffon Puppies – What You Should Know Before You Buy…

3 Little-Known Facts About the Brussels Griffon

After the first and second world wars but was brought back by American and British breeders.

2. The Brussels Griffon wasn’t popular until 1997

3. The Queen of the Belgians liked this breed

It was her kennel that made the dog smaller and the head more humanlike.

Temperament & Intelligence of the Brussels Griffon 🧠

The temperament of the Brussels Griffon can vary from dog to dog because it is a mix of the English Toy Spaniel, the Pug, and the Affenpinscher. Any of these dogs can influence your pet’s temperament. It can be outgoing and energetic or shy and withdrawn. There is no way to tell beforehand.

The Brussels Griffon can be a naughty and temperamental dog with a lot of self-importance. It will often cause mischief when It doesn’t get its way, and if you leave it alone when it’s angry, it can break housetraining, rip up clothing, and knock over lightweight furniture.

The Brussels Griffon dog is a good family pet in situations where the children are grown. Because this breed likes to be the center of attention, it would not like to share you with the children. Though this breed is not likely to become aggressive toward the child, it might misbehave when you are not looking and can even break housetraining.

Just like the Brussels Griffon will not like you sharing your attention with children, it will not like sharing it with other pets. They may even become aggressive but will more than likely show their disapproval in other ways, like through misbehavior and becoming a nuisance to the other pet.

Things to Know When Owning a Brussels Griffon

Here are some facts you should be acquainted with before you purchase a Brussels Griffon.

The Brussels Griffon will require between one-half cup and one cup of food per day. Because these dogs are so small, overfeeding is a common problem that leads to obesity, as well as many other health problems associated with being overweight.

We recommend a high-quality food packed with nutrients that don’t contain any pesticides. It’s best to ask your veterinarian if grain-free or some other type of food is best for your dog before you serve it. Foods with omega fortification are a great choice.

The Brussels Griffon requires a moderate level of exercise, which means you will need to spend about 30 minutes a day playing or walking your dog. Brussels Griffon likes to exercise with their owner, and fetch is one of their favorite ways to expend their built-up energy.

The Brussels Griffon is a very smart dog, but they are not very easy to train because they are very stubborn and preoccupied with their agendas. They are unlikely to spend much time trying to figure out what you are teaching them and will instead try to get you to go along with their plan.

If you are patient, you may be able to teach your pet a few tricks by giving them a treat when they comply.

The Brussels Griffon requires very little grooming. There are two types of coats that a Brussels Griffon may have. The smooth coat will require weekly brushing for most of the year and daily brushing during the shedding season. The rough cut does not shed and is usually shaved short like a poodle except for the beard area.

You will also need to trim the nails because long nails can be painful to run in, and they can scratch surfaces and furniture. Tooth brushing is also a great idea to prevent cavities and to improve your pet’s breath.

Let’s look at some of the most common health problems associated with the Brussels Griffon.

Heart disease is the primary cause of death in older Brussels Griffon dogs. The heart valve deforms and no longer closes properly. In many cases, a heart murmur proceeds this condition. If a heart murmur is detected early by a doctor, medication can slow down the progression of heart disease and prolong your pet’s life many years.

Epilepsy is not a single disease but is instead a term used of a neurological disorder that causes seizures in your pet. Many things can cause seizures, and determining the problem is not always easy, so it is recommended to take your pet to the doctor at the first sign of trouble. Besides the seizures, you may notice other symptoms like tremors, imbalance, and excessive sleeping.

Just like humans, a dog can have an allergic reaction to the environment, and the Brussels Griffon breed seems to be predisposed. The most common way an allergy manifests itself in a dog is with itchy skin, and your pet will often show signs of this reaction on the feet, belly, skin folds, and ears. Symptoms that your dog is having an allergic reaction include excessive licking of the paws and rubbing the face. Frequent ear infections may also signal that something in the environment does not agree with your dog.

The head of a Brussels Griffon is a little too large for the birth canal, which can lead to complications during childbirth. We recommend seeking the help of a veterinarian and a skilled breeder if you were to find your puppy pregnant. We do not recommend attempting to breed these dogs without      proper knowledge.

The male and female Brussels Griffon look extremely similar. The male face tends to be slightly wider while the female’s face has softer curves. The male has less patience for repetitive tasks like training while the female is less tolerant of loud noise.

The Brussels Griffon can be a great companion if you live alone and will provide you with constant entertainment. It is also well suited to couples and is content to live in a small apartment. A half-hour of fetch each day out in the backyard removes the need to go for long walks each day and provides your pet with the exercise they need. They have a long life expectancy, and it doesn’t have a lot of health risks.

We hope that you have enjoyed reading over this guide to the Brussels Griffon dog breed. If we have piqued your curiosity and taught you something new, please share this Brussels Griffon info on Facebook and Twitter.

Great Dane & Chihuahua Mix: Is it Possible? What Does it Look Like?