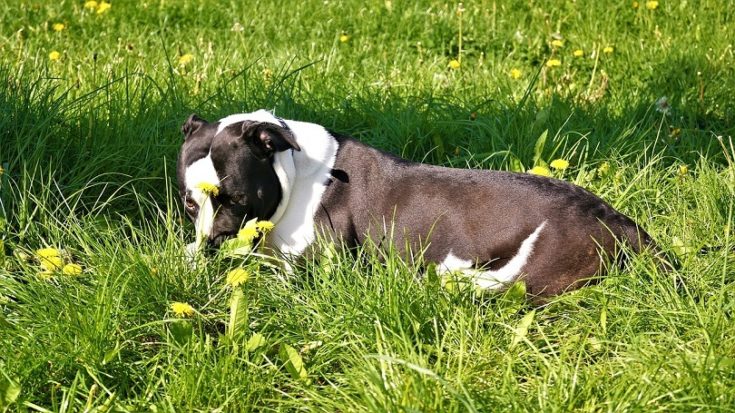 As a mix of the American Bulldog and the American Staffordshire Terrier, the American Bulldog Staffy is an incredibly strong dog, despite being considered a medium-sized breed. He was bred as a working dog, but his loyal and loving nature means that he also makes a great family pet. He gains most of his characteristics from the Staffy, but both parent breeds actually stem from the same ancestors and share a lot of similar traits, so there is consistency throughout the crossbreed’s heritage.

The American Bulldog Staffy is considered a very good companion dog because he is incredibly loyal and usually very friendly with humans. He can mix with other dogs and other animals, but he needs to be socialized early if you want him to mix well; otherwise, he can show aggression towards other animals as he tries to protect you.

This breed is incredibly energetic. They will play for hours and it can seem impossible to tire them out with walks. Their size means that they can live in apartments, but they really do benefit from lots of outdoor exercise, so may be better suited to a family home with plenty of outdoor space.

American Bulldog & Staffordshire Terrier Mix Puppies – Before You Get One

1. Both Parent Breeds Stem from Bulldogs

Both the American Bulldog and the American Staffordshire Terrier are both believed to stem from bulldog type breeds. In fact, they likely stem from English bulldogs, which means that the two-parent breeds share a lot of the same characteristics. They are both strong and powerful, have high-intensity energy, and they are both considered very good guard dogs as well as companion pets. Although the mix gets a lot of his characteristics, especially physical ones, from the Staffy, you are effectively dealing with a Bulldog strain.

The vast majority of problems that stem from the parent breeds and the mix arise as a result of poor or no socialization. Dogs require socialization to learn how to act and react around humans and animals. When they are given this socialization at a young age, it becomes instinctive for them to be confident and friendly, rather than wary and aggressive. It should also be noted that the male Bulldog, in particular, does not tolerate other male dogs well, especially in their own home, and some dogs will never welcome another male dog into their pack.

3. They Are Heavy Shedders

The short coat of the breed comes from both parent breeds, and while many potential owners expect the short hair to mean little or no shedding, nothing could be further from the truth. The American Bulldog Staffordshire Terrier mix is a prolific shedder, and the length and thickness of their fur means that the hair can be quite irritating and scratchy. Owners are advised to use a slick brush to help maintain the dog’s coat because this will help minimize shedding and encourage a healthier, better-looking coat.

Staffies and Bulldogs divide opinion. Owners and former owners tend to think of them as being loyal and loving, but the breeds are strong and without socialization, they can display antisocial and destructive behavior. Socialize your mix when he is a puppy and you shouldn’t have any problems in this area.

The breed is also very energetic and has an incredibly muscly physique. As such, when he is playing, it is possible that he will come into contact with tables, chairs, and even people or other pets. His stocky size means that your puppy will likely not notice collisions, but you will. Giving him plenty of daily exercise and letting him out in the yard to have a mad five minutes can help to alleviate this.

In some respects, this breed makes the perfect pet for families with children. They are very attentive and always aware of their surroundings. They are also extremely loyal and protective. They have a seemingly inherent knack of determining threats and they will protect children in their charge.

On the other hand, they are also muscly, energetic, and can be bulldozer-like when playing. If a child gets in the way while your American Bulldog Staffy is playing, they can be easily knocked down or stood on. Although the breed will usually be gentle with young ones, they can’t always help it when they get excited and wound up.

Both parent breeds were used as catch dogs and in taking down large animals. Later they became used for dogfighting. This is likely where the breeds get their reputation as being dangerous, and while it is true that some owners do still breed and keep them for these purposes, if you avoid disreputable breeders, this shouldn’t be a problem.

With that said, the breed does have a tendency to chase other animals. If you get a Bulldog Staffy from a pup, this shouldn’t be a problem. You will be able to introduce them, discourage rough play, and ensure that the dog even gets along with cats.

Male bulldogs, however, do not always mix well with other male dogs. This can include at the park and especially in the home. If you adopt or buy an older male mix breed, and already have a male dog in your home, you will need to introduce them before considering owning them both.

Dogs should always be supervised with smaller animals when they are out of the cage or pen.

The American Bulldog Staffordshire Terrier Mix is a characterful and memorable breed. It has lots of energy and it has dietary requirements to match its boundless energy. Before taking one into your family, there are some factors you should consider.

This breed is higher energy and high intensity and, as such, it has a high dietary requirement, especially to ensure that muscles and bones retain strength. Protein helps maintain and grow muscle, which this breed has in abundance, so you will need to find good food that is high in protein. Nutrient-dense foods that are low in carbohydrates are beneficial because this enables you to feed an appropriate amount of protein without adding weight.

Be aware that this breed is well known for being gaseous, so you will want to avoid tinned food and stick to dry food. Some dogs of this breed can fare well when fed on a combination of dry and wet food.

The breed is not for the lazy or faint-hearted and they have masses of energy to burn off every day. You should be prepared to exercise your dog for a minimum of an hour and you will benefit from giving them at least two periods of intense exercise each day. This will keep them mentally and physically exercised, prevent them from chewing and destroying through boredom, and will make them easier to manage.

Both parent breeds perform well in agility classes and, despite their stocky and muscular build, they can build up a head of steam and reach decent speeds. Again, agility classes are a good way of burning off excess energy.

The breed has a very strong jaw that will lock onto any toy. If you intend to play tug of war or a similar game, be prepared to lose.

Their energy and their desire to please their owners make the American Bulldog Staffordshire Terrier mix a dog that is considered relatively easy to train. However, you may come across some issues.

The breed can be headstrong and stubborn. This means that you need to assert yourself as the pack leader and show your dominance, without being physically aggressive. If your dog views you as being dominant, he will want to please you and will be more likely to take to training.

The mix is also very attentive and your dog may spend a lot of time surveying his surroundings, so if you are hoping to teach him new commands or tricks, this might be best performed in a quiet area with no external distractions.

Be consistent, start training at a young age, and use healthy treats as well as lots of physical praise to help instill good behavior.

Visit puppy classes and take your puppy on walks in local dog parks so that he can meet other dogs and people. This gives you the opportunity to discourage jumping up and other behavioral habits that can prove challenging as your dog ages.

A lot of potential owners mistakenly believe that the American Bulldog Staffordshire Terrier mix will be a low shedding breed because of their short hair. However, they are prone to considerable shedding. Use a soft bristle brush to maintain their coat and ensure that it stays healthy. The coat should not pick up excessive dirt, because it won’t stick to the surface of the hairs, and you should avoid bathing your dog unless it is absolutely necessary because this can damage and deplete the natural oil that protects them.

Brush your dog’s teeth two or three times a week, check their ears and eyes for signs of infection or injury, and clip their nails as and when they get too long – usually signified by a clicking sound when walking on a hard surface. Long nails aren’t usually a problem for this breed because they naturally file down as they walk on concrete and other abrasive surfaces, but occasional clipping might still be required.

However, you should always look at the parent breeds to determine any potential conditions. Both parent breeds are prone to hip dysplasia and luxating patella.

Adult males tend to weigh a little more than the female American Bulldog Staffy, although the opposite can be true in the Bulldog breed. The male American Bulldog Staffy does tend to be more dominant, though, and it can prove difficult to keep a male of this breed with another male dog, although this also depends on the individual dog. Beyond this, both genders are considered the same.

The American Bulldog Staffordshire Terrier mix crosses two intelligent and very strong breeds. It is muscular and stocky in appearance, with short hair, and tends to take its appearance and physical appearance from the Staffy over the Bulldog. The breed comes in a variety of colors and markings and, although the American Bulldog and Staffordshire Terrier have endured a bad name in the past, owners will attest to their loving and loyal nature, as well as to the fact that they are very gentle around small members of the family.

Their strength and stature mean that some care should be taken if you have children, but this particular breed really can become an integral and cherished member of the family. Just be prepared for regular grooming and to provide considerable levels of exercise.