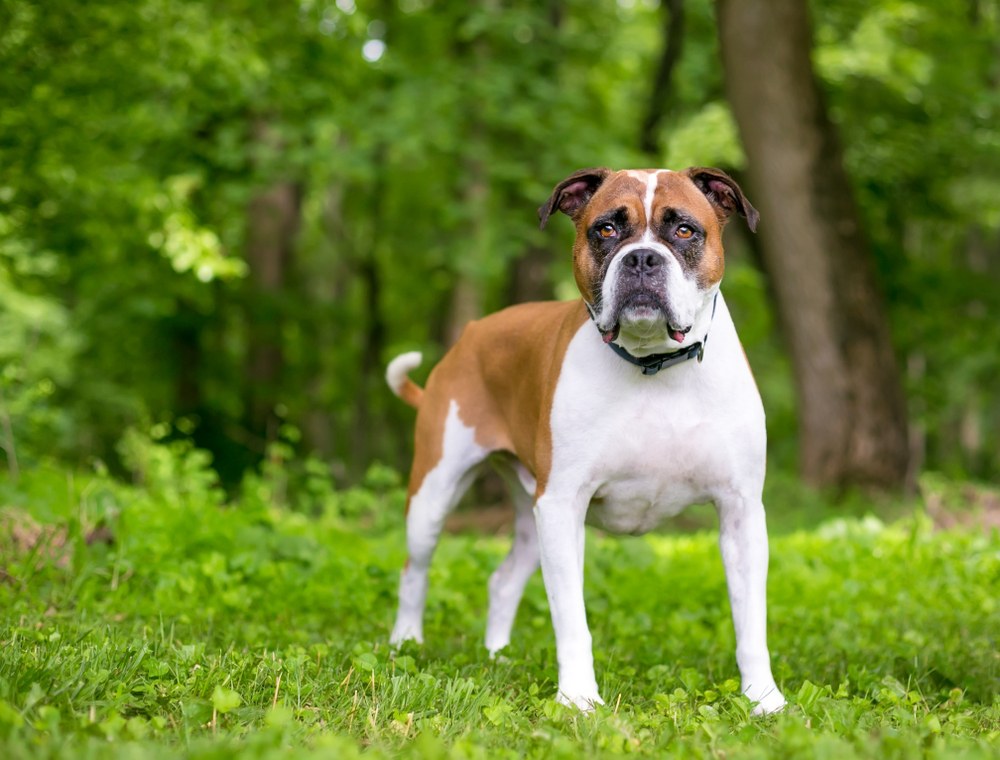 Bulloxers are a mix between the American Bulldog and the Boxer. Both of these dogs have had diverse histories, being used as fighting dogs, working dogs, and even hunting dogs. This led to two highly intelligent and very athletic breeds; traits which the Bulloxer inherits.

While Bulldogs tend to be very stocky and muscular, Boxers tend to be taller and leaner, though still covered in rippled muscle. This Bulldog and Boxer mix often gets the both of worlds, becoming a tall, lean, long, and muscularly built tank of a canine. They’re very athletic and agile, with more strength and endurance than most breeds.

But despite their large stature, these dogs are gentle teddy bears. They’re extremely loving and surprisingly calm, especially given the playfulness they often inherit from the Boxer side of the family. They’re great with kids and make excellent companions for individuals and families alike.

Bulloxer Puppies – Before You Buy…

What’s the Price of Bulloxer Puppies?

The Bulloxer is a designer dog, which means that they’re bred from two purebred parents. In this case, it’s the American Bulldog and the Boxer. Both of these are highly coveted breeds, recognized by the AKC with pedigrees and papers.

Bulloxer puppies will be less expensive than puppies from either parent. Boxer puppies commonly go for as much as $2,000 and American Bulldogs commonly sell between $1,000 and $1,500.

Since the Bulloxer isn’t a pedigreed breed, you can expect to spend much less for a puppy. In general, $800-$1200 is reasonable, though the price will depend a lot on the parents and the breeder.

When purchasing a puppy from a breeder, be sure to research the breeder and make sure they’re reputable. Also, take a look at the facilities to gauge how well the puppies have been treated. Try to meet the parents of your pup too if you can. They can tell you a lot about the future of your puppy.

The Bulloxer breed isn’t a very common breed yet, so you’re not very likely to find one in a shelter available for adoption. Still, you might get lucky, so it’s worth a look. If you do find a Bulloxer for adoption, you’ll save yourself quite a bit of cash while offering a puppy a second chance at a great life.

3 Little-Known Facts About the Bulloxer

1. Both Parents Were Fighting Dogs

We’ve already mentioned a bit about the history of the Bulldog and the Boxer, but it’s a very interesting history, so let’s dig a bit deeper. Boxers were originally used for dogfighting, and they even got their name from the way they swing their front paws, which looks similar to a boxer throwing punches.

The Bulldog is a brave beast of a dog that was originally used in bull baiting. In fact, it’s where they got the name Bulldog. They were so tough that they could even take down full-sized bulls, a feat that few other creatures could accomplish.

Today, both breeds have become much calmer, which is why they make such great companions and guard dogs. A lot of that toughness remains though, and it makes for very athletic dogs. Naturally, the Bulloxer inherits this athleticism and toughness, though they’ve never been used to fight bulls!

2. Bulloxers are Very Easy to Maintain

Few dogs are easy to maintain as Bulloxers. To start, they’re a hardy breed, genetically susceptible to very few health concerns. They only shed lightly and need very little grooming overall. Aside from teeth and nails, your Bulloxer won’t need much time spent on maintenance and cleaning.

3. They Can Become Destructive When Bored

Bulldoxers are highly athletic dogs with above-average levels of intelligence, a mixture that often results in destructive behaviors when left alone. Your Bulloxer will need some mental and physical stimulation to prevent them from getting bored. Once your Bulloxer gets bored, you might come home to find the backyard full of deep holes or your couch chewed up into a million pieces! Make sure to exercise your Bulloxer plenty and keep them mentally engaged to avoid these destructive behavior patterns.

Temperament & Intelligence of the Bulloxer

The Bulloxer is a highly intelligent dog that can easily get bored if left alone for too long. They have plenty of energy thanks to their athleticism, though they’re a surprisingly calm breed overall. Still, you’ll want to make sure that you provide plenty of engagement to keep them from getting bored.

This is a very loving and loyal breed that will want to stand guard, keeping the family safe. They love affection and are happy to both give and receive it, though they’re not too demanding about it. That said, they’re a big dog that doesn’t know it, and they’ll often try to fit on your much-too-small lap!

Because of their loyal and protective nature, Bulloxers are the perfect pets for families. They’re excellent with kids, taking on the natural role of guardian. They know how to be gentle with smaller creatures, including the children of their family.

Bulloxers also know how to be gentle with other pets, even much smaller ones. They tend to get along very well with pets of all types, even small dogs and cats. By socializing your Bulloxer early on, you can help make it even easier on them and they’ll take very well to interaction with other animals.

Things to Know When Owning a Bulloxer:

The Bulloxer doesn’t have any specific dietary requirements. But they’re a hefty breed, so be prepared to go through a lot of dog food. They’re very active but can still be prone to becoming overweight if fed too much. Be sure to monitor your Bulloxer’s intake to avoid overfeeding.

The descendants of working and fighting dogs, Bulloxers have plenty of energy. They’re quite athletic and love to play and exercise, even becoming bored if not enough opportunities to do so are presented. You’ll want to provide at least 30 minutes of physical activity each day for your Bulloxer.

But overall, they’re not a hyper breed. They do need exercise, but not excessive amounts, so they’re well-suited for smaller and moderate-sized dwellings. A massive backyard is not necessary for the Bulloxer.

Because they are a highly intelligent breed, you should have very little issue training a Bulloxer. They’re bred from dogs that needed lots of training to perform in their respective jobs, so the Bulloxer is a natural when it comes to learning. Especially if you start young, your Bulloxer should be easy to train and a quick learner.

Bulloxers are some of the easiest dogs to maintain. They don’t shed much and they require little grooming. Like all dogs, they’ll need regular teeth cleanings and nail clippings. Make sure to trim the nails once you can hear them clicking when your Bulloxer walks.

It’s believed that by crossbreeding dogs, you can reduce the chances of the offspring inheriting diseases that are prevalent in either parent. Both parents to the Bulloxer are already relatively healthy, but when you crossbreed them, the result is a very robust breed with few health concerns.

Bloat can happen to any dog, and it can be fatal. With bloat, your dog’s stomach swells up and can even twist in on itself. This is a deadly concern that needs immediate attention.

Colitis is an inflammation of the large intestine or colon. It usually results in diarrhea, though it can also result in vomiting occasionally.

Male and female Bulloxers are generally pretty similar. Temperamentally, there is little difference you could note except for the type of differences that manifest in each individual dog. But physically, there are some more notable differences.

Males tend to be a bit taller than females. Often, males will stand 24-27 inches in height, while the females tend to be 22-24 inches. Likewise, males tend to populate the top of the weight class, while females generally fall in the lighter end of the range.

If you’re looking for a dog breed that is easy to care for and offers excellent protection, then the Bulloxer is a top-tier choice. They’re loving and loyal, with high levels of intelligence that make them intuitive and easy to train.

These dogs make excellent family pets, naturally gentle with smaller people and pets. They’re large dogs, but they don’t usually know it. Expect your Bulloxer to act like a 90-pound lap dog.

With few health concerns to worry about, your Bulloxer should lead a long life with few, if any, complications. But they’ll eat quite a bit, so be sure to budget in enough expenses to cover all of that dog food!