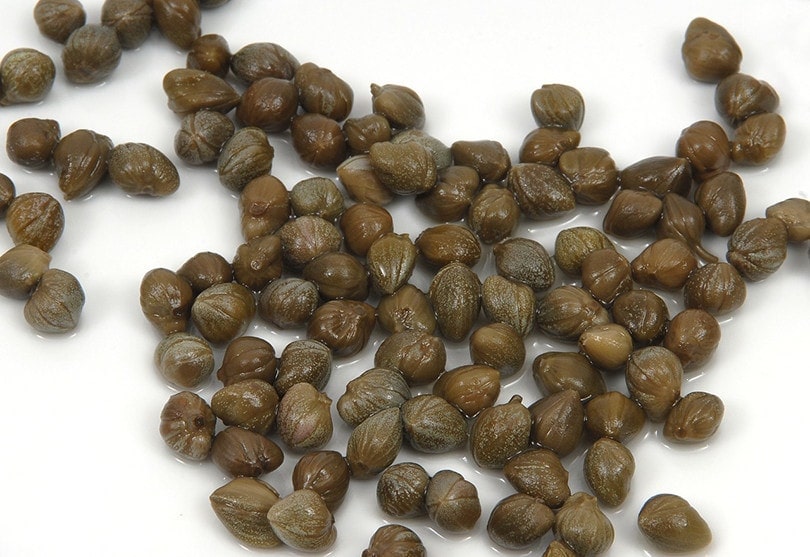 It’s difficult to keep our cats from wanting to try everything we eat. Even when we walk away from our food, they can sneak in and steal a bite from our plate. While curious cats may be interested in sampling whatever is on our menu, it’s important to know which foods are safe for them and which could cause a potentially severe problem.

When it comes to capers, they are not toxic to cats. However, they also shouldn’t be fed in excess to your cat. If your cat has already eaten a caper, there’s no need to worry. Let’s take a deeper look at capers, what they are, and how they affect your cat.

Capers are the small, unripe flower buds of the caper bush. If left to grow, they will develop into caperberries, the fruit of the bush. These bushes are found in Italy, Morocco, Spain, and Asia. They are mostly associated with Mediterranean cuisine and are usually consumed either brined or dried. Raw capers are so bitter that they become unpalatable. Vinegar or salt brines enhance their flavor and make them a delicious added ingredient to dishes. Caperberries are about the size of grapes and contain seeds. While capers are used as ingredients in cooking, caperberries are primarily used as substitutes for olives in cocktails.

A caper looks like a little green oval about the size of a pea. When pickled, they take on a tangy, lemon flavor that is much different than their taste in raw or dry form. Their salty flavor is similar to green olives. The acidity of capers pairs well with rich fish, like salmon. They are often served on top of smoked salmon with cream cheese. In addition to fish, capers are used to add texture and flavor to sauces, pasta, and stews. They’ve also been used as ingredients in some medicines.

If your cat is trying to get your smoked salmon, they may end up eating a caper or some of the brine.

Capers that are packed in brine should be soaked before consumption for at least 5 minutes. The brine is too salty or full of vinegar and will overwhelm the flavor of the capers otherwise.

If people should remove the capers from the brine, here’s where it gets even more important for cats. Since our feline friends have smaller bodies than we do, it doesn’t take much of a food they shouldn’t have to cause a problem.

Salt is toxic to cats. When they eat a caper packed in salt, this can make them sick. Unfortunately, the salty flavor of capers may entice the cats even more.

Even half a teaspoon of salt can be toxic to your cat. If your cat happens to steal a few capers off your plate or from the trash, this isn’t a cause for concern. However, unrinsed capers or caper brine can cause a high sodium concentration in your cat’s bloodstream called salt poisoning.

If you’re using capers, keep them out of your cat’s reach and make sure the jars stay closed when you’re through with them.

One tablespoon of capers contains:

If you think your cat has eaten an excessive number of capers or you caught them drinking the brine, look out for the following signs of salt poisoning:

If you notice any of these signs, bring your cat to the emergency vet immediately.

Salt can dehydrate your cat and make them extremely thirsty. Here are some other household items and foods that are full of sodium and should not be excessively offered to your cat:

Many cats don’t drink enough water. They rely on their diet to provide them with the hydration they need each day. Since so many cats are already mildly dehydrated, just a little bit of salt can exacerbate the problem. Always make sure your cat has access to fresh, clean water.

Capers are small, unripe flower buds of the caper bush. They’re used in cooking to add flavor and texture to many dishes.

Capers usually come packed in very salty brine. They are typically used after they’re rinsed first. One tablespoon of capers contains 9% of the daily value of sodium for humans.

Cats can eat capers, but they shouldn’t eat too many of them. One or two sometimes won’t be enough to harm them but eating capers shouldn’t be a regular occurrence for your cat. They can consume too much sodium, leading to dehydration and other health problems. Capers aren’t toxic or poisonous to cats in small amounts, but too many can cause salt poisoning. The brine should be kept away from cats, as it holds most of the salt.

Make sure your cat always has access to clean water and does not eat too many salty foods, including capers.

Can Cats Eat Pumpkin? What You Need to Know!