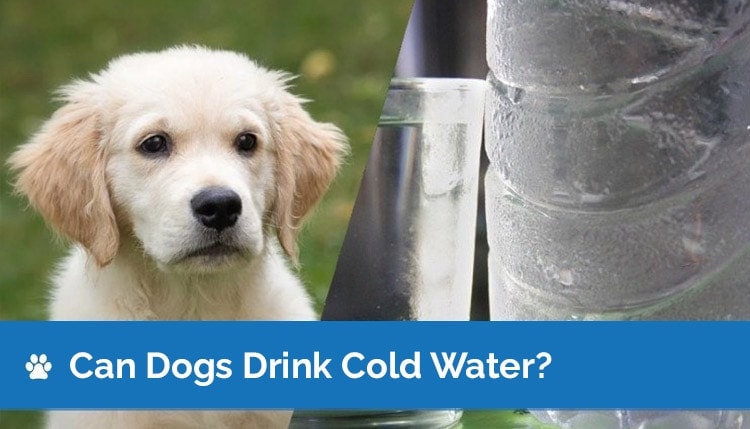 Few things are as refreshing as a tall glass of ice water on a hot summer’s day. It cools your internal organs and makes its way to your circulatory system to lower the temperature in the rest of your body. You may wonder if it’ll have the same effect on your pup.

The short answer is yes!

The story that giving your dog cold water will make them sick is a myth. The legend goes that ice water will cause your pup’s stomach to go into life-threatening spasms and could die if left untreated. With accounts like this one, you have to peel back the layers to get to the truth. Like many anecdotes of this nature, it begins with a kernel of truth that takes on a life of its own.

Let’s begin with the so-called cause of the problem. Bloat is part of the truth of this myth. It occurs when a dog gorges on food—or water—that also introduces a lot of air into the pet’s gut. As the name implies, the stomach expands as it has evolved to do when an organism eats. The result is abdominal pain that is caused by this reaction. You probably experience the same thing every Thanksgiving.

The discomfort isn’t confined to your pup’s stomach. Organs around it also feel the pressure, which worsens the pain. The trouble starts if your dog’s stomach begins to twist in response. Then, it takes a potentially deadly turn.

The situation can deteriorate and become gastric dilatation and volvulus. The organ gets out of position and folds upon itself. It’s not unlike what happens if there is a twist in your garden hose. The pressure builds up even further while restricting the flow of water. In this case, it’s the blood that is going to the stomach and other organs.

Without proper blood flow, the parts of the stomach can die. Needless to say, it’s life-threatening. The only remedy is emergency surgery. That means you must recognize the symptoms early to take the appropriate action. A pet with this condition doesn’t hide it. It’s too painful. He may nip at you, especially if you try to touch his belly. He’ll show apparent signs of distress.

There’s no mistaking the fact that something is seriously wrong with your pup.

Some breeds are more susceptible than others, especially if you have a dog with a broad chest like a Great Dane. Their body shape leaves little room for expansion for their stomach and, thus, increases their risk of GDV occurring.

The best thing you can do is to discourage your pet from gorging. That means keeping him hydrated, so he doesn’t gulp down a lot of water after play. You will also have to plan his meals to space them through the day so that your pup isn’t ravenous at feed time. He’ll be less likely to inhale a lot of air as he eats, which can prevent his stomach from distending.

The takeaway message regarding cold water is that it isn’t the temperature that is encouraging your pooch to drink a lot. It’s the lack of a reliable supply while he is active. That is probably the origin of the myth that ice water causes bloat and serious health consequences.

Concerns About Ice and Your Pup

However, there are a few other points we need to discuss to close the case on cold water and your dog’s safety. You may draw it from the tap, or you might cool it down with ice. That fact moves the goalposts and brings up some other issues we need to address. It’s all about the frozen liquid.

You probably know that chewing ice isn’t a smart idea, at least if you listen to your dentist. It isn’t as much the action of breaking the cubes with your teeth as it is the temperature extremes. That’s one reason there is Pyrex cookware. Your chompers aren’t unlike dishes that crack going from the stove to the freezer.

If you have a Collie or Dachshund, you’re asking for trouble with a breed that comes out of the gate with a propensity for dental health issues. Ice can make the problem worse.

Compulsive ice chewing or pagophagia is something seen in people, but it bears mentioning with pets, too. In humans, it can indicate a psychological issue. However, it can also be a sign of anemia. Eating ice may cause blood vessels to constrict, or perhaps, the effects lie with the nervous system. With dogs, it can merely be a habit, especially if you give your pup ice as a treat.

We suggest that you discuss any behavioral issue with your dog that becomes obsessive with your vet. Often, there is an underlying cause for unusual behavior in a pet.

Giving your dog cold water isn’t a bad thing, especially on a hot day. The rumors that you should only give your pet tepid liquids are unfounded. However, a potential problem does exist if your pup is dehydrated and attacks his water bowl because he’s so thirsty. Then, the risk for bloat and its consequences exists.

The best advice we can offer is to make fresh water available to your pooch all the time to discourage this behavior. Monitor his diet, too, and you can prevent many of the unfortunate risks of bloat and GDV.