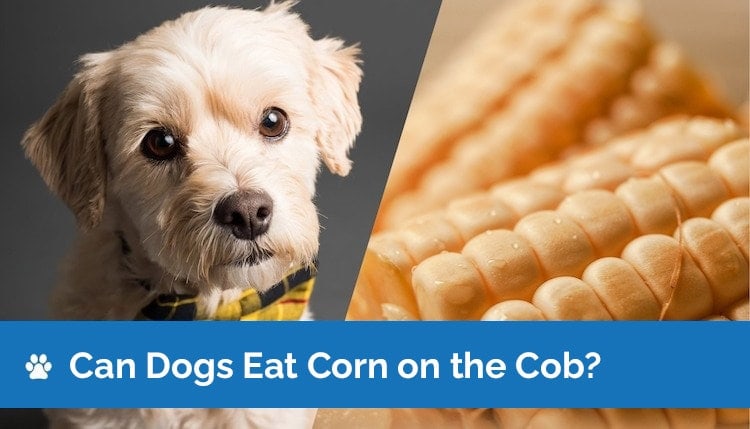 Along with the summer months comes the opportunity for barbecues, and if you own a dog you probably know firsthand that they are world-class beggars when it comes to barbecue food (and just about anything). While they may sit and wait with longing in their eyes for something as seemingly harmless as some of your corn, you may find yourself wondering, is it safe to give dogs corn on the cob?

In brief, we can tell you yes to the corn and no to the cob. Read on for more details about why.

First, Is Corn Itself Bad for Dogs?

Putting aside the cob for a moment, corn is perfectly safe for dogs to consume. According to Purina, one of the leading suppliers of dog food, corn is both safe and healthy for your four-legged friend to consume, and it’s included in many varieties of dog food.

Because of the implication that corn is used as a “filler” food for many farm animals due to its low cost and short germination time, canine nutrition experts at Purina go on to say that corn is not only benign but beneficial for dogs, and it provides many nutrients they need to maintain their wellbeing.

What About Corn on The Cob?

Since corn is healthy for dogs to consume, some people believe that corn on the cob is safe as well, especially if their pooch tends to gnaw on the cob joyfully or chew it into pieces. However, the fact is that it can be very dangerous.

According to animal healthcare specialists at MedVet, a corn cob is a large mass of undigestible material. They note that even smaller pieces chewed up can cause intestinal obstruction. This can lead to serious complications for your pup, including severe pain while trying to pass the cob pieces and may even require surgery to remove the corn cob.

You can safely give your dog corn to eat, but never allow your pup to get a hold of a corn cob.

How Can I Serve My Dog Corn?

Since corn is beneficial for your dog, you may choose to serve him or her corn once it has been removed from the cob. If you do choose corn as a treat, cooking it first will make the corn easier to eat and digest.

However, while you can boil or grill the corn like you would if making it for yourself, you should not prepare the corn the same way! As humans, we love and indulge in butter and salt to make our food tastier and more satisfying, but dogs shouldn’t consume the same things we do.

According to an article from Smart Dog Owners, butter is not toxic for dogs, but it’s certainly not good for them given the amount of fat and the high caloric density.

High sodium content in a dog’s diet can also be problematic. Pets WebMD says that too much salt for a dog can lead to major health issues including stomach problems, dehydration, and vomiting, and they also warn that it can be fatal in extreme cases.

To prepare corn for your pup, simply cook the corn without using butter or oil, and don’t add salt once cooked.

See also: 10 DIY food storages you can build for your dog today!

Looking to include your pup in your movie night snacking? That’s fine, according to American Kennel Club! Plain popcorn is safe for your dog, but just like regular corn, make sure to keep the butter and salt out of any popcorn you offer your dog.

You also should pay attention to any discomfort your dog may have from kernels getting stuck between their teeth. This minor annoyance for us can also cause discomfort for your dog, so some flossing may be in order after the theatre lights come back up.

If you’re itching to give some corn (or popcorn!) to your pup for a sweet summer treat, know that it’s safe once it’s been removed from the cob; the corn cob itself isn’t digestible, and it can cause serious intestinal complications. You may prepare your corn with butter and salt, but your dog will enjoy the corn just as much without them, so leave these additives for your human friends.