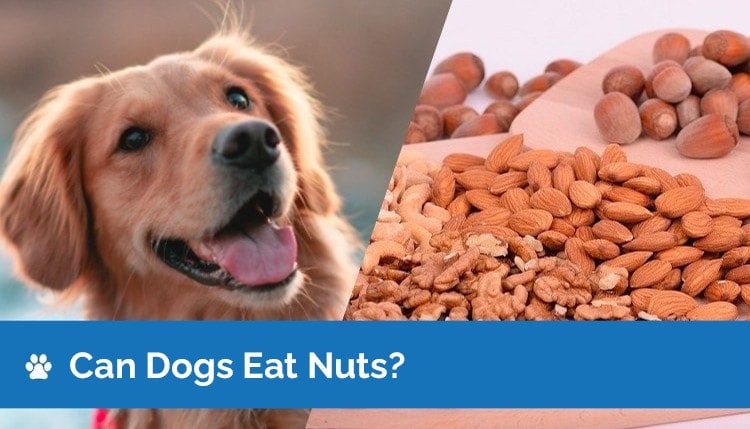 There are some dogs out there that will eat almost anything given the chance. (Here’s looking at you Labradors.) However, there are some things they shouldn’t get their mouths on. But what about nuts? Can dogs eat nuts?

Well, this isn’t as straightforward of an answer as you’d think.

Technically, there are a few nuts that dogs can eat in moderation. However, more nuts are unhealthy—and even toxic—than are good for them. So, as a general rule of thumb, we prefer not to feed our dogs any nuts at all.

Let’s explore the reasons why nuts can be dangerous, the many different nuts out there, and which ones are safe for your dog.

How Are Nuts Dangerous?

While nuts are a great source of protein and a healthy snack for us, they’re not the same for dogs. They can be very unhealthy for them—especially in large quantities.

Nuts are chock full of fat and oil. And while some fat is good for your pup, healthy fats are already factored into your dog’s kibble. Feeding them extra fats such as nuts can quickly lead to certain health conditions such as obesity or pancreatic issues.

Apart from the fat situation, nuts come covered in a hard, protective shell. However, they’re not necessarily tough enough to stand up to a dog’s chomp. And these shells can be even worse than the nuts themselves. Shells can shard easily and when swallowed and do major damage to your pup’s esophageal linings or intestinal tracts.

Other nuts can be candy or chocolate-coated, both of which are highly toxic for your pet. All in all, nuts can be quite dangerous for dogs.

Nuts That are Dangerous for Your Dog

But what nuts are specifically dangerous to your pup? With so many types of nuts out there, it’s important to understand which pose the biggest threat to canines.

Technically speaking, pistachios themselves don’t pose too much of a threat to your pooch. However, the hard shells that they are found in are the real danger. And since these nuts are smaller than other varieties, they pose a bigger risk of accidental swallowing and splintering.

If a pistachio’s shell is dangerous because it’s too small, a walnut is also dangerous for the exact opposite reason. Their large shells can be extremely tough and hard to chomp through. But once they’re broken through, it doesn’t take much for your dog to swallow these large imposing shards. They are much more likely to cause severe harm to your pup than any other nut’s shell.

As far as shells go, pecans aren’t as dangerous as pistachios and walnuts. They tend to have thin shells that can easily be crushed down to avoid internal damage. But that’s not the danger with pecans. It’s the nut itself that causes issues. When compared to other nuts, the pecan has one of the highest fat percentages on a gram-by-gram basis. And it only takes a few pieces to exceed your pup’s daily recommended fat value.

If there’s any nut that your dog should explicitly avoid, it’s macadamia nuts. And that’s because macadamia nuts are poisonous to your dog! The spookiest part about this is that scientists don’t even know why. But poisoning from macadamia nuts is a very real and serious condition. After ingesting macadamia nuts, your dog may start to show symptoms such as diarrhea, vomiting, fever, shakes, or an inability to walk. If you fear that your pup has consumed any amount of these nuts, seek veterinary help immediately.

What Nuts are Safe for Your Dog?

Although most nuts are dangerous for your dog, there are a couple of varieties that are relatively safe for your pup.

Cashews are a tasty treat for humans, and there’s a good chance that your dog will love them too. And it’s not a problem if they have one or two. But just like other nuts, they are high in fat. So, if you do give them a cashew, keep it very limited and only on a rare occasion.

Out of all the nuts on this list, peanuts are the safest option for your dog. And they’re also the only ones on this list that aren’t true nuts. They’re technically legumes, and when removed from their shells and unsalted, peanuts can make a delicious snack.

Peanut butter is also safe for dogs to eat. However, peanut butter can be dangerous in large amounts due to the added sugar.

Nuts in a Nutshell

Although nuts are a great source of protein and fat for us, you should probably keep them away from your dog. The same healthy fats for us equate to a very unhealthy situation for your pup. The shells can be equally—if not more—dangerous. And let’s not forget about macadamia nuts. They’re poisonous for them!

But if you don’t want your dog to miss out on nutty goodness, a tablespoon of peanut butter once a week won’t do any harm—just try and opt for a no-sugar-added variety.

Pomeranian vs Chihuahua: What’s the Difference? (With Pictures)

E-Collar vs. Shock Collar for Dogs: What’s the Difference?

Can Dogs Eat Doritos? What You Need to Know