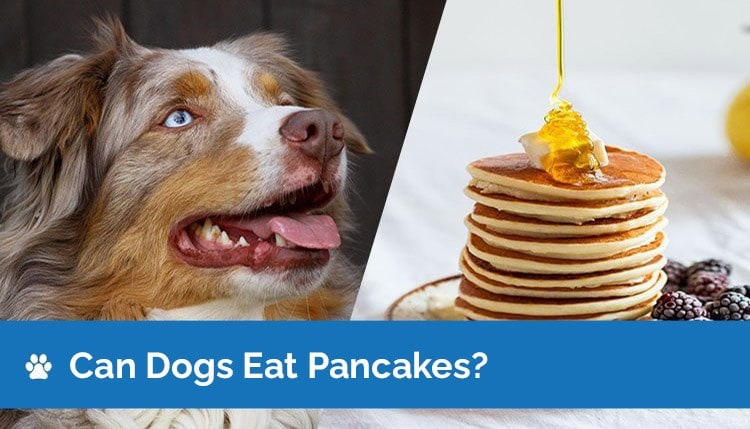 For most of us, our dogs are beloved members of the family. We don’t like for them to feel left out, so we often share scraps of our meals with our four-legged friends. It’s a common practice that doesn’t usually cause too much harm. But not everything you eat should be shared with your dog. Those delicious, fluffy pancakes, for instance, are not the best choice for your pooch.

Are Pancakes Poisonous for Dogs?

So, are pancakes going to hurt your dog if you feed one to it? Well, no. They’re not poisonous for your dog. But that doesn’t mean you should start shoving short stacks down Fido’s throat. Even though your dog may approve with glee, it’s not a great choice.

Pet problems like obesity have raged out of control in recent years. Many dogs are incredibly overweight, and the consumption of human food is a definite contributing factor. Regularly feeding your dog foods such as pancakes can directly contribute to making your dog fat, overweight, sedentary, and even obese.

Worse, diabetes has even become a serious problem for dogs in recent years. Foods like pancakes are certainly contributing to such concerns.

So even though pancakes may not be poisonous for dogs, they’re not going to help them out. That said, a completely plain pancake with no syrup or additives is not going to immediately hurt your dog.

The Most Dangerous Parts of Pancakes

Though a plain pancake on its own may not pose much of a threat to your dog’s health, many of the other items that are commonly served on pancakes are much more of an issue.

Let’s start with chocolate chips. Everyone knows that chocolate is bad for dogs, but chocolate chips are commonly thrown into pancakes to make them sweeter. Giving this to your dog is asking for dietary trouble!

What about syrups? Most people top their pancakes with thick maple syrup, which is full of tons of calories, mostly all sugar. This stuff isn’t even healthy for us to eat in large amounts, so it’s certainly not good for your dog who’s even more susceptible to obesity and diabetes.

Another common pancake topping that can be hazardous for your dog is nuts. Some types of nuts can be toxic to your dog, even if the pancake surrounding it is not.

Raisins also make their way into and onto pancakes — another food that’s toxic for your pup to eat.

But the list just keeps on going. Most pancakes come with butter on them. We might be able to process such high amounts of fat without much issue. But dogs don’t naturally have any food sources in their diet with that amount of fat, so their bodies aren’t built to process it.

We’ve established that pancakes aren’t the best food to feed your beloved furry friend. But at the same time, they’re not toxic or immediately detrimental to your dog’s health, so the occasional treat of a small piece of plain pancake probably isn’t a big deal.

As mentioned, it’s mainly the things that are commonly added to pancakes that can be dangerous for your dog. So, what might you add to your pancake instead that your dog could enjoy?

For starters, you could try smearing a little peanut butter on it. Keep it to a minimum though because peanut butter is still high in fat. Also, be sure to find peanut butter that’s completely free of xylitol, which can be deadly for dogs.

You can also try adding other fruits that are less harmful. Bananas and apples are great choices that won’t make your dog sick.

Most people love a good pancake breakfast. Heck, your dog would too! But the truth is, those pancakes aren’t particularly healthy for us, let alone our dogs. Your dog is susceptible to becoming overweight, obese, and even diabetic if you too often feed it the wrong foods.

A plain pancake on its own isn’t going to hurt your dog. But make sure that pancake is completely plain before you feed it to your dog. Or if you opt for toppings, make sure they’re dog-safe like apples and bananas.

The main thing to avoid is the sugary syrups, fatty butter, and toxic nuts and chocolate that often adorn our breakfast foods. Not only can these be toxic for your pup, but they can also contribute to an overweight and unhealthy dog that isn’t living its best life.

How to Stop A Dog Fight: 5 Expert Tips

20 Most Expensive Dog Breeds in the World