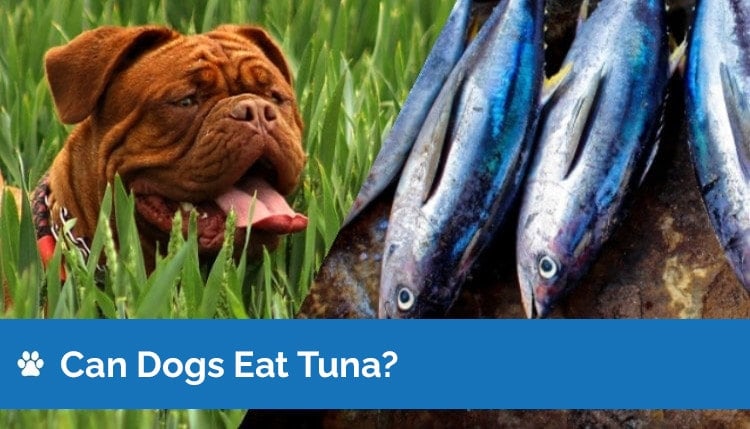 Most fish is extremely healthy for both you and your pup, so you may be tempted to share a bite of tuna with your dog the next time that you open a can. However, have you ever stopped to wonder if tuna is actually safe to feed to dogs?

As it turns out, tuna is not toxic to dogs. However, there are other factors involved that should give you pause and cause you to offer your dog a different type of fish instead.

Below, we go over what you need to know before feeding your dog tuna.

Is Tuna Safe for Dogs?

There is nothing about tuna that’s toxic to dogs. Most pooches love the taste, and it has a variety of important nutrients.

However, tuna also tends to be full of something that’s not quite as nutritious: mercury.

Fresh tuna has higher levels of mercury than almost any other commercially sold fish. This poisonous element is bad for people, as well as dogs, but since most dogs are quite a bit smaller than their owners, it has a more pronounced effect on them.

If your dog consumes enough mercury, they can suffer from a variety of ailments, including:

In extreme cases, death can even result. This is why many experts recommend avoiding tuna if you want to feed fish to your dog; it’s not the tuna itself that’s the problem, but that won’t matter much if your dog comes down with mercury poisoning.

How Much Tuna Is Too Much?

This is difficult to answer, as it depends on the size of your dog and the amount of mercury in the tuna. The latter question is almost impossible to pin down, as mercury levels will vary from fish to fish.

Generally speaking, though, it’s probably okay to offer your dog a bite of tuna, but you shouldn’t make it a part of their regular diet. You may want to avoid it altogether if you have a small breed dog.

Another concern involved in feeding your dog tuna is the presence of fish bones. Dogs can choke on these bones, so make sure they’ve been removed before serving. Smaller portions are also less likely to have dangerous bones inside, so that’s another reason to limit your dog’s intake.

The good news is that few commercial dog foods use tuna for this very reason, so you’re unlikely to have an issue unless you eat the fish constantly.

However, many dogs manage to eat a large amount of tuna by stealing cat food from their feline siblings. It’s best if you don’t feed your cat tuna either, but if you do, keep their food away from your dog.

Are There Any Health Benefits to Feeding Your Dog Tuna?

Like most fish, tuna is absolutely loaded with omega fatty acids. These powerful antioxidants perform all sorts of wonderful functions in your dog’s body, from boosting their immune response to ensuring that their brains and eyes develop properly.

Tuna is also high in lean protein, so it’s a great way to help your dog build muscle without packing on extra pounds. Few dogs are allergic to it, which gives it a leg up on other protein sources like chicken or beef.

However, there’s nothing special about tuna itself that you can’t get from other fish. It’s hard to justify feeding your dog something that will load them up with poisonous mercury when they could get all the benefits from other foods.

Does It Matter How the Tuna Is Prepared?

No, there’s no way to cook all the mercury out of tuna.

However, if you’re going to serve your dog cooked or raw tuna, make sure you take all the bones out of it first. Tuna steaks are a great option for this reason.

Also, be wary of what kinds of spices you use when cooking it. Many seasonings can upset your dog’s stomach, and they’re completely unnecessary from the dog’s perspective. Your pooch will surely tell you that meat needs no decoration.

Canned tuna is often stored in oil, so that’s something else to consider. The oil may add even more omega fatty acids, but it will also increase the calorie levels, making the meat more fattening. Some canned tunas include additives that aren’t healthy for dogs.

What’s the Verdict? Is Tuna Safe for Dogs?

In the strictest sense of the word, yes, tuna is safe for dogs. The fish itself is full of protein and omega fatty acids, giving your dog a ton of important nutrients.

However, there’s also mercury inside the tuna that can be quite dangerous for your dog. The more your dog eats, the more danger they’ll be in, so it’s best if you limit their tuna consumption as much as possible.

At the end of the day, while tuna offers a variety of health benefits for dogs, it’s hard to justify serving it to your pooch when there are so many better options out there.

How Do Dogs Feel Pain? What You Need to Know