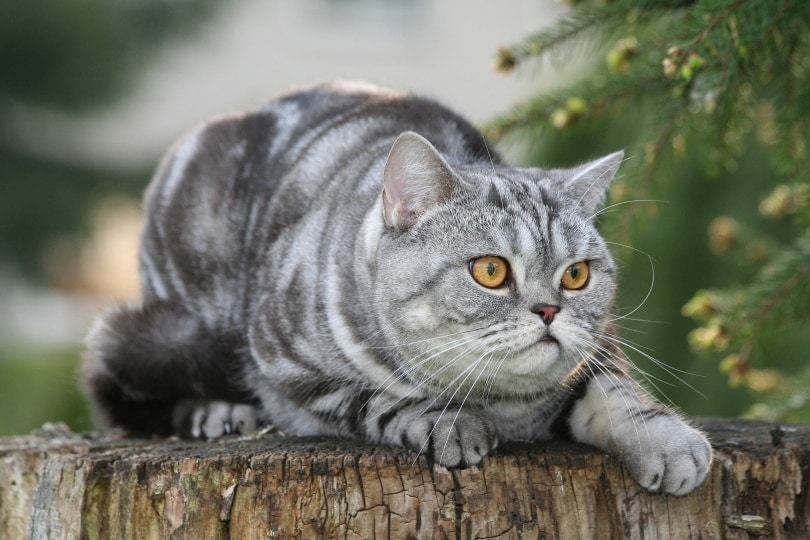 Cat’s eyes can come in various colors, but it seems like we most often see cats with blue, dark brown, or yellow eyes. However, there are far more than three eye colors you’ll see in cats! Let’s talk about the 11 different eye colors you may see in cats.

What Determines Eye Color in Cats?

Sometimes, a cat’s breed will impact the color of its eyes, with some breeds always having the same color eyes, like all Siamese cats having blue eyes, for example. Purebred cats tend to have more vivid eye colors than mixed breed cats, but this isn’t always the case. When it comes down to it, genetics will always determine your cat’s eye color, just like it does for their coat color.

The other major determining factor in a cat’s eye color is the light reflection from the eyes. The structure’s density in the eye and how light is absorbed or reflected from the eye can alter the appearance of the color. Color can also appear to be altered by the environment, especially affected by the light and color in the environment. Environmental conditions are usually responsible for the appearance of some eye colors being different in different settings.

The 11 Most Common Cat Eye Colors

This eye color can range from pale or bright yellow to gold. The Burmese cat is known to have brilliant gold eyes, with show-quality cats often exhibiting the most striking coloration. Other breeds with eyes that are commonly yellow are the Bengal, Bombay, British Shorthair, American Shorthair, Manx, and Sphynx. This color also regularly shows up in mixed breed cats and the Norwegian Forest cat.

Amber eyes are common and have a reddish undertone. Interestingly, some people consider amber eyes to fall under the orange eye color, which would make it one of the rarer colors. However, amber is darker and more reddish than a traditional orange. This coloration occurs in the same breeds that commonly have yellow eyes, like the Bengal, British Shorthair, and Manx.

Although not uncommon, brown eyes are slightly less common than yellow and amber eyes, but they occur with the same frequency as hazel eyes. This is because brown eyes are just a variation of hazel that can appear brown to the untrained eye due to how dark it shows. There are no breeds of cats known to have truly brown eyes.

Hazel eyes occur slightly less common than yellow and amber but more commonly than green. Hazel is a standard eye color in wildcats, like bobcats and lynxes. This color combines green and yellow or gold, giving the eyes a complex combination of those colors.

Green is not a common eye color in cats, but green eyes routinely occur in specific breeds. The Egyptian Mau has distinct green eyes that appear in a bright, lively green known as “gooseberry,” named for the fruit of the same name. Other cat breeds that usually have green eyes are the Norwegian Forest cat, Havana Brown, and Abyssinian.

Blue eyes are not as common as one might think, occurring across the board in the Siamese breed. Other breeds with blue eyes include Persian, Himalayan, Snowshoe, Balinese, Birman, and Ragdoll. Blue eyes can appear in various shades, from a light, airy blue to a deep blue similar to cobalt or cornflower. Blue-eyed cats completely lack melanin in the irises, which accounts for the blue eyes. The shade of blue is determined by how the eyes reflect light and similarity of the structures of the eyes.

One of the rarest solid eye colors in cats, orange contains less red than amber eyes. Orange cat eyes typically are similar in tone to apricot, carrot orange, orange marigold, or even ochre. The Japanese Bobtail, Maine Coon, and Devon Rex may have orange eyes. The only breed known to regularly show off orange eyes, though, is the Turkish Van. If your adult cat previously had a different eye color and develops orange eyes, a vet visit is needed to rule out illness.

Copper is often considered to be a shade of orange, and it can be difficult to determine the minute color differences between copper, orange, and amber eyes. Copper appears as an orangish-brown color but lacks the undertones of green that would see in hazel or brown eyes. Breeds that are sometimes spotted with copper eyes include the Persian, British Shorthair, Japanese Bobtail, Cornish Rex, and Chartreux. Like orange, sudden development of copper eyes in an adult cat can point to a serious medical condition, and a vet visit is in order.

Since the eyes of an albino cat lack melanin, they most commonly appear blue. However, albino eyes can also appear pink or a soft shade of lilac purple. Albino eyes may be extremely sensitive to light and can potentially be damaged by exposure to overly bright lights. White and albino cats are often confused with each other, but all white cats are not albino. White cats that are not albinos will have some form of pigmentation in the eyes, although they can also have blue eyes. Albinism is not specific to any breed, but it occurs most commonly in Siamese, Bengal, Tonkinese, and Domestic Shorthair cats, although the latter may be due to the sheer number of Domestic Shorthair cats that exist.

Heterochromia is not a specific eye color, but it refers to a cat having two different colored eyes. Heterochromia is not the breed standard for any breed, but it does notably occur in multiple breeds, including Japanese Bobtail, Cornish Rex, Devon Rex, British Shorthair, Sphynx, Turkish Angora, Persian, Munchkin, and Turkish Van. It most commonly occurs in white cats because it is linked to the white spotting gene.

Dichroic is different from heterochromia in that dichroic eyes contain two colors in a single eye. These colors can occur in large or small quantities. The most common form of dichroic eyes in cats appears as a nearly solid iris with a halo-like ring around the exterior of the iris. This most commonly occurs in white cats, much like heterochromia, but it is rarer.

Eye colors in cats are fascinating, whether you like trying to figure out your cat’s genetics or you just love looking into your furry friend’s eyes. There are some very minute differences between different colors of cat eyes, and it can be difficult to differentiate between them, especially if you struggle with determining slight differences between oranges, yellows, and gold tones. However, with practice and plenty of internet surfing pictures of kitties, you’ll be able to identify your cat’s eye color in no time.

British Shorthair vs Scottish Fold Cats: The Differences (With Pictures)

Can Cats Eat Pringles? What You Need to Know!