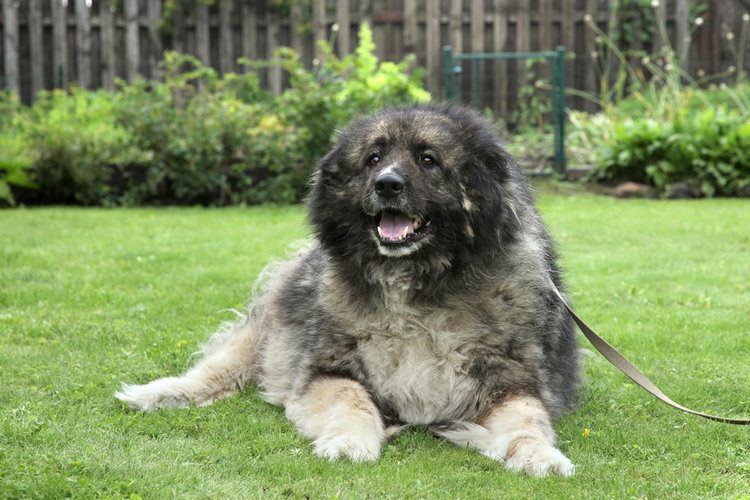 A massive breed that weighs upwards of 100 pounds, the Caucasian Mountain Dog is as fierce as they come. It was bred to protect livestock and lives from the dangerous predators of the Caucasus mountain region.

They’ve always been working dogs, and they’re both hard-working and intelligent. But they can also be quite stubborn and independent, traits that are magnified by this breed’s incredible size. When a Caucasian Mountain Dog stands on its hind legs, it’s generally taller than most humans in the vicinity.

The Caucasian Mountain Dog is one of two main types of Caucasian Mountain Shepherds, the larger and hardier of the two. They’ve got long coats that help keep them warm in the harsh winters of the Caucasus mountains, so they’re not well-suited for hot climates.

More than most other breeds, this is a dog that will require constant attention. Don’t even think about neglecting this dog in the backyard. If it feels neglected, your Caucasian Mountain Dog can become very aggressive and destructive, which can be quite dangerous in such a powerful, large dog.

The Caucasian Mountain Dog is actually a Caucasian Shepherd. It’s a breed recognized by the AKC, so they’re fully papered and pedigreed. As such, they’re a pretty pricey dog to purchase, not to mention the fact that they’re huge and require lots of space and food.

Luckily, there are plenty of reputable breeders who are continuing to create healthy and happy Caucasian Mountain Dogs. You shouldn’t have a hard time finding a source, but expect to shell out quite a bit to bring that new puppy home.

The price of these puppies starts at $1,200-$1,500 at the very bottom end. These are still reputable breeders, but the parents aren’t of champion lineage.

$2,500 is a very common price point for a Caucasian Mountain Dog that hails from proven bloodlines.

Make sure to do your research on any specific breeder before purchasing your puppy from them. Ensure that they have a good reputation and they’re known for healthy pups. Then, take a look at their breeding facility and see that it’s clean and the puppies are well cared for.

If you can, take a look at the parents of your puppy. They can let you know a lot about your own puppy’s future, such as what it might look like, its demeanor, or any health concerns that might be apparent.

1. They Go by Many Different Names

As we’ve mentioned, the Caucasian Mountain Dog is one of two main types of Caucasian Shepherds. But they have far more names that they’re known by than just those two! You might hear this breed called the Caucasian Ovcharka, Caucasian Sheepdog, Kawkasky Owtscharka, Russian Bear Dogs, Baskhan Pariy, and more. But don’t get confused, they’re all the same breed!

2. They’ve Been Known to Fight Bears and Wolves

Caucasian Mountain Dogs are extremely territorial, which is part of why they were so successfully used to guard lives and livestock in the Caucasus mountains. But they’re also incredibly brave and courageous, never known to back down from a fight.

In fact, these incredible canines have even been known to fight bears! More commonly, they’ve been known to take down wolves in order to protect their flock or family. Either way, this is one dog that has the skills and size to protect you and your family, provided it’s properly trained.

3. They Can Make Good Therapy Dogs

It may be surprising that a breed that can weigh upwards of 200 pounds and fight a full-grown bear has a gentle side that makes them great as therapy dogs — but it’s true. They’ve got a loving side of them that’s very affectionate and calm, but it takes a lot of training to bring this nature to the forefront.

This breed displays a wide range of temperaments, all in the same dog. They’re territorial and aggressive when defending their family or flock. This can make them a handful when it comes to training and it’s why they’re recommended only for experienced trainers.

But beyond the aggressive and protective side, they can also be calm, loving dogs. Like all dogs, they want and need a lot of affection from their family. Once trained, these dogs can make excellent companions, work dogs, therapy dogs, and more.

Though the Caucasian Mountain Dog has a natural guardian instinct to protect the family, they’re usually not the best choice for family dogs. Because of their large size, they can unintentionally be a danger to children. A 200-pound dog can easily bowl a small child over and cause serious damage, even if it’s just an accident.

But it takes a lot of training to ensure that this breed is calm and safe for kids. It can be done and has been done successfully, but it takes an experienced and patient hand with a lot of time spent training.

Because they’re so territorial, Caucasian Mountain Dogs often have a hard time getting along with other pets. This is especially true with small pets that will activate this breed’s strong prey drive.

But that doesn’t mean they can’t get along. If properly socialized and trained from an early age, even this massive breed can learn to get along with the other pets in a family.

Things to Know When Owning a Caucasian Mountain Dog:

It shouldn’t be much of a surprise that a dog that can weigh 200 pounds or more is going to eat a massive amount of food. And you won’t want to feed them cheap food either because their nutritional requirements are so high. They need the nutrients provided by a high-quality dog food, so plan to spend quite a bit keeping your Caucasian Mountain Dog fed.

However, these dogs can be prone to gaining weight. You’ll need to monitor the amount of food you provide to ensure that your dog’s weight stays in a healthy range. And to avoid bloat, you’ll want to break all that food down into many smaller meals throughout the day instead of feeding them everything at once.

Though this is a very large breed, they don’t need quite as much exercise as you might think. Due to their massive size, it takes a lot of energy just for them to move! Taking your Caucasian Mountain Dog for a 30-minute walk each day with a bit of extra playtime thrown in should be adequate.

This is a highly intelligent breed, but they’re also quite stubborn at times. They can be very independent and won’t be trained by a novice. It’s recommended that only the most experienced trainers attempt to train one of these dogs.

Once trained, they can become excellent companions and listen to commands well. But training needs to begin early and continue for the full life of the dog. Don’t allow your Caucasian Mountain Dog to reach adulthood without proper training. You’ll have an unruly dog that doesn’t want to listen, and making a dog of 200+ pounds listen when they don’t want to is an exercise in futility.

This breed has a thick, long double coat. As such, they need quite a bit of grooming. If you don’t brush at least two to three times each week, the dead hair can build up and your dog’s coat might become a matted mess.

Once a year, this breed will shed very heavily. Expect to be constantly sweeping around the home to avoid large piles of hair accumulating everywhere!

Overall, the Caucasian Mountain Dog is a robust breed that’s not prone to many health problems. This is somewhat surprising for a dog of this size since many large breeds are susceptible to a variety of health concerns. Below are a few ailments to keep an eye out for:

Hip dysplasia: This malformation of the hip can occur in any dog, but it’s most common in large breeds. When the top of the leg bone doesn’t properly fit in the hip socket, it causes rubbing, pain, and eventually, loss of movement. There’s no cure, but with careful management, you can still help a dog with hip dysplasia to live a long and mostly comfortable life.

Cataracts: Though generally not a big deal, cataracts can lead to blindness if left unchecked. You can tell a cataract by the cloudiness forming in a dog’s eye. If you see this, take your dog to the vet and get the issue addressed.

Though mostly similar in temperament, the physical difference between males and females of this breed is quite noticeable. Females tend to top out around 180 pounds and 28 inches in height. Males, on the other hand, are often over 200 pounds, sometimes as heavy as 220. They’re also taller, generally standing between 27 and 30 inches.

There’s a certain allure to massive dog breeds like the Caucasian Mountain Dog. No doubt, they can be quite intimidating due to their impressive size. But this breed can also be independent and aggressive if not properly trained.

If you’re thinking of owning one of these awesome dogs, do your research. Make sure you’re prepared for everything that’s involved. It’s not recommended that first-time dog owners start with a Caucasian Mountain Dog. They’re too difficult to train without experience, and the results can be dangerous if not done properly.

Still, with proper training and dedication, this breed can make an excellent companion, working dog, or guardian.