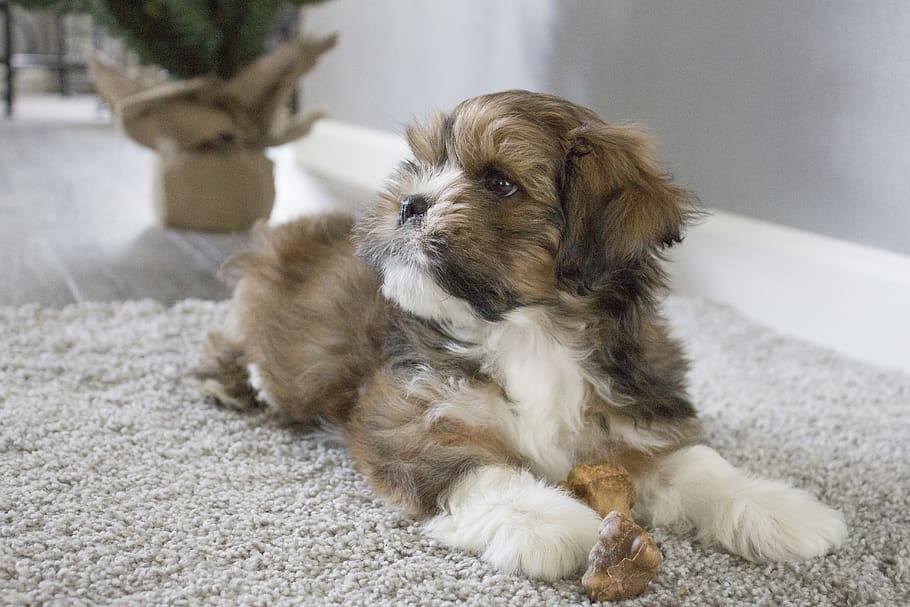 A cross between the Cavalier King Charles Spaniel and Shih Tzu, these tiny little dogs are fiercely intelligent and extremely playful. They love to spend time with their families, and they’re not picky about who those families are — they can include kids, cats, gerbils, etc..

Don’t expect them to serve as capable guard dogs, as these dogs have never met a stranger. Also, if you loathe grooming your pet, this is definitely not the breed for you.

Otherwise, however, these fluffy little cross-breeds are among the most adorable and charming animals you’ll ever meet — and if you’ve never met one, the guide below will serve as your introduction.

Cava-Tzu Puppies — Before You Welcome One Into Your Family…

You’d be forgiven for mistaking a Cava-Tzu puppy for a stuffed animal, as these little guys are almost too cute to be real. Tiny even when full-grown, they can seem impossibly small as puppies.

They seem to have one-track minds, as all they want to do is play — with you, with their brothers and sisters, with that squirrel over there, and so on. This makes them extremely active and precocious, and while they don’t do well with being ignored for long stretches of time, they can entertain themselves for a few hours.

They’re incredibly energetic, but given their short little legs, it doesn’t take much to tucker them out. That means their exercise requirements aren’t that daunting, so this is one breed you won’t be stuck playing fetch with for hours on end.

1. Their Appearance Can Vary, But They Generally Look More Like Shih Tzus

Whenever you’re dealing with a cross-breed — especially one without much of an established history — it’s always a bit of a blind guess as to which parent breed they’ll resemble more, both physically and personality-wise.

That’s definitely true of Cava-Tzus, as both their appearance and temperament can vary depending on which parent’s genes are stronger. Typically, though, most of these dogs look more like Shih Tzus than Cavalier King Charles Spaniels.

If you’d prefer to own a Cava-Tzu that looks more like a King Charles, though, they definitely exist, so talk to your breeder about finding you one.

We suppose there’s not much reason to bark if you’re never going to convince someone that you’re a fierce guard dog. The fact that they’re mostly silent, however, makes them polite houseguests when burglars aren’t breaking into your home. If you live in an apartment, a Cava-Tzu is unlikely to irritate the downstairs neighbors.

Then again, these dogs could at least give you an audible cue when you’re about to trip over them.

3. Both Parent Breeds of the Cava-Tzu Have Royal Blood

The name “Cavalier King Charles Spaniel” is a good giveaway that those dogs used to be mainstays of the English royal court in the 17th century, but Shih Tzus were also the favorites of monarchs — in their case, Tibetan royalty in the 9th century.

As a result, your Cava-Tzu may be prone to putting on airs. These dogs definitely consider themselves special, and if you earn their favor, they may just let you live (or allow you to give them a treat).

Temperament & Intelligence of the Cava-Tzu 🧠

Both parent breeds are known for being intelligent, but neither are in the “super genius” category with Poodles and Border Collies. As a result, the Cava-Tzu is a dog who’s smart, but not too smart for their own good.

This can be a bit of a sweet spot, to be honest. Many super-intelligent dogs use their brains to cause trouble, whether by escaping from their enclosures, stealing treats, or testing you during obedience training.

Cava-Tzus, on the other hand, love to please. They have enough in their noggins to pick up commands quickly and easily, but instead of seeing how far they can push you, they’re more likely to try to earn your favor by being totally obedient.

Cava-Tzus are excellent family pets, and that’s true regardless of what your family looks like.

Typically, when people talk about a “family pet,” they mean one that’s good with small children. Cava-Tzus are certainly that, as they can’t do much damage to a little one nor would they want to. Plus, they have tons of energy and are always looking for a playmate.

But these pups are great for older families too. Seniors do well with them, as they’re active and affectionate, but not so much that it becomes overwhelming. They’re also more than happy to curl up next to you on the couch to see what’s on TV.

This makes them good for single people as well. While they love companionship, they can also do fine on their own for a while, so you shouldn’t have too many problems with separation anxiety.

They can offer you all the love and affection a bigger dog can, but they don’t have quite as many exercise requirements as, say, a Labrador. That way, if you’re exhausted after work, you won’t have much to do to settle your pooch down.

These dogs love to play, and they’re not particularly discriminatory about their choice of playmates. They love cats, other dogs, gerbils, and so on (although you might not want to let them play with your boa constrictor).

Now, it should be noted that the other pets may not be too keen on having a full-time playmate. If you have a cat who likes to be left alone or an aging dog who’s long since had their last zoomie, a Cava-Tzu may be more trouble than they’re willing to put up with.

For the most part, though, bringing a Cava-Tzu into a home with other pets shouldn’t create too much drama.

Things to Know When Owning a Cava-Tzu

Cava-Tzus typically aren’t as life-changing of a commitment as many other breeds are, but that doesn’t mean you should just bring one home without thinking through your decision first.

These dogs have their own special needs and quirks, and you should be sure they’ll be compatible with your household before taking the plunge.

Cava-Tzus are tiny, so your food costs shouldn’t be exorbitant. They likely won’t eat more than a cup of kibble per day.

That’s no excuse for serving them inferior food, however. These dogs need a high-quality kibble that’s high in protein and fat, without cheap fillers like wheat and corn. Those foods are full of empty calories, and it doesn’t take much for you to have a pudgy little Cava-Tzu on your hands.

You may want to serve them a wet food as well; we don’t feel that it’s necessary, however, and we’d caution you against only serving them wet food, as it’s extremely calorie-dense. Still, it’s a great way to ensure they get all the moisture they need, especially if you live in a hot environment.

Go easy on the treats and table scraps, because these dogs can plump up in a hurry. Keeping your dog at a healthy weight is one of the best ways to ensure that they stick around for as long as possible.

These animals are extremely active, but that doesn’t mean you’ll need to run triathlons with them every day. They’re like Ferraris: They can go fast, but not for long.

Still, it’s important to ensure they get all the exercise they need. A moderate walk is a great way to accomplish this, and you shouldn’t need to go more than a few blocks before they’re tuckered out.

These dogs love to play, so they’ll definitely appreciate it if you spend the time tossing a ball for them or playing tug-of-war. They value time with their humans above all else, and it won’t take long to wear them down, so try to make yourself available as much as possible.

Like most dogs, they respond well to mental stimulation as well, so a puzzle toy is always a welcome distraction. You should also train them regularly, and a decent training session should leave them pooped.

Training is essential with any dog, and Cava-Tzus are no exception. Luckily, there’s not much damage they can do even if left untrained, as they’re not going to kill anyone and they can’t knock Grandma over if they jump up, but that’s no reason to have an uncivilized dog on your hands.

Generally speaking, these dogs love obedience training — provided they get plenty of positive reinforcement from it, of course. They love to please you, and they enjoy having their brains taxed, so they’ll likely soak up any training you want to give them.

They can occasionally be a little stubborn, but not on the level of a Husky or a Bulldog. Still, you’ll need a firm hand during training so they know you can’t be pushed around.

While they’re not hypoallergenic animals, Cava-Tzus don’t tend to shed much either. You’ll likely want to brush them once a week, just to keep the hair in your house to a minimum.

Cava-Tzus rarely need baths unless they’re visibly dirty. You may have to give them a haircut every now and then, though, and special attention needs to be paid to the hair in their ears. Clean their ears regularly as well — at least twice a month.

If you expect to carry your Cava-Tzu around frequently, then you’ll definitely need to trim their nails often, as they won’t do enough walking to file them down normally. Expect to brush their teeth regularly as well.

Cava-Tzus are fairly healthy dogs, and you shouldn’t have too many problems with yours. There are a few conditions that you should be aware of ahead of time, though.

Typically, there isn’t much difference between Cava-Tzu males and females. They’re similarly-sized and both sexes are extremely affectionate.

Female Cava-Tzus tend to be a bit more territorial, so you might have resource guarding issues with a girl. They should be minimal, though, and easy to train out of them. Female Cava-Tzus also tend to take to obedience work easier than male Cava-Tzus, but again, the difference is hardly worth mentioning.

If you want a dog with a ton of personality and affection in a small package, then the Cava-Tzu might be the one for you. These tiny little fluff balls are incredibly fun, but they’re also easy to own.

Cava-Tzus make great pets for large families, small families, singles, apartment dwellers, homeowners — you name it. Just be sure you’re ready to spend a large chunk of your time playing with your new buddy.

They may not be big and they’re terrible guard dogs, but for an adorable, affectionate companion, you can’t do much better than a Cava-Tzu.