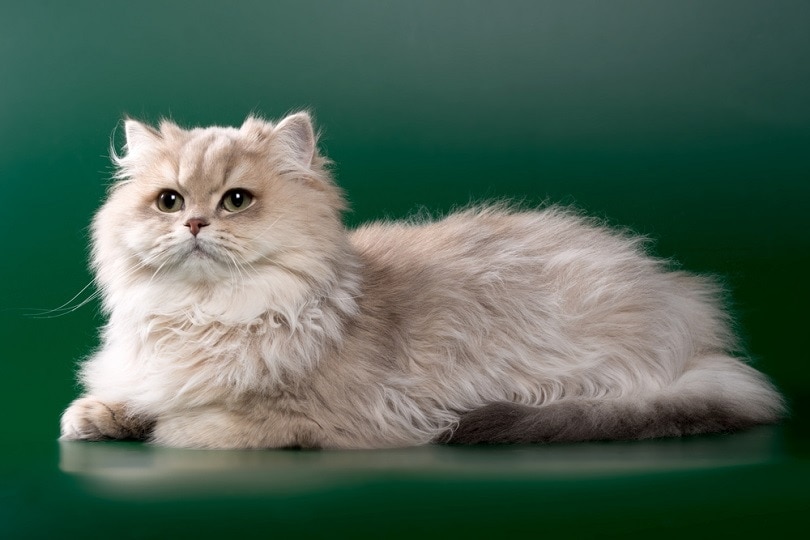 Whether you’re considering getting a new cat or have just seen pictures of Chinchilla cats and want to learn more, you’re in the right place. These gorgeous felines are incredibly sweet animals who make fantastic household additions for those who have the time and patience to keep up with their grooming and maintenance. Gentle and laidback, these fluffy balls of fur are a perfect fit for those looking to truly bond with their pets.

Also known as the Silver Persian, the Chinchilla cat is part of the Persian breed, though some argue it is a breed entirely to itself. One of the oldest man-made breeds, its first appearance was around 140 years ago in England in Mrs. Vallence’s cattery. The Chinchilla cat gets its name due to its fur that resembles that of the South American rodent.

These felines make excellent companions as they are incredibly people oriented. They’ll seek you out for attention often, whether it be in the form of playtime or cuddling. Possibly the most important thing to know if you’re considering getting a Chinchilla cat is that it requires much grooming on a nearly daily basis. Due to their long, thick hair, you will need to spend serious time combing and dematting your kitty.

Chinchilla Kittens – Before You Buy…

What’s the Price of Chinchilla Kittens?

Because Chinchilla cats are purebred and a bit of a rarer breed, you should expect to shell out a few bucks. Prices can range from $1,000-$2,000 when getting from a reputable breeder. You should prepare for the possibility of having to go on a waiting list for one of these cuties too.

You could also try a rescue organization, though a Chinchilla might be harder to find. You’d likely save a couple of hundred bucks if you do, though.

1. A Chinchilla played a role in a James Bond film.

In the James Bond film, Diamonds Are Forever, the villain Blofeld had a Chinchilla as a pet.

2. You probably most recognize the Chinchilla from Fancy Feast commercials.

That’s right! The ever-so-fancy cat from the Fancy Feast commercials is one of these beauties!

Temperament & Intelligence of the Chinchilla Cat

Now, it’s time to find out if the Chinchilla cat would be a good fit for you!

Are These Cats Good for Families? 👪

Yes, but mostly families with older children. Chinchilla cats aren’t greatly energetic and prefer to laze about receiving attention. They prefer calm and quiet, so they don’t make great playmates for little kids. If your kids are older and understand that this fluffball won’t be engaging in play often, but they can give them plenty of pets, things should be fine, though!

Chinchilla cats tend to get along well with other animals, but as with children, this can depend on the energy levels of the other pets in your home. If you have a puppy already, a Chinchilla likely won’t be your best bet. But if you have dogs or cats on the older side who are content to just hang out, this breed should be A-OK.

Things to Know When Owning a Chinchilla Cat

As with all animals, there are plenty of things you should know before adopting a Chinchilla cat. From what kind of food they need to grooming requirements to health risks, we’ve got you covered.

Chinchilla cats have pretty much the same nutritional requirements as any other cat — although if you have a kitten, they will require a bit more nutrients and protein than an adult cat. You may want to go with a prescription diet, though, due to the prevalence of oxalate bladder stones in the breed. You may also want to go with a food that helps in the prevention of hairballs since these cats have such long, thick hair that makes them prone to hairballs. Another issue you may have with a Chinchilla is in how you’re feeding them. Because of their smushy faces, they may have a more difficult time with dry food and even drinking water. Using a large, shallow bowl will make it easier for them.

Before bringing your new cat home, ask the rescue organization or breeder what food they’ve been eating thus far. If you switch them to something new suddenly, it could upset their stomach. Instead, get some of the food they’ve been consuming and mix it in with the brand you decide upon to get them slowly acclimated to the new stuff.

These cats tend to be rather lazy, but they still need some exercise to help manage their weight and health. While they do occasionally burst into the zoomies, it’s more likely you’ll need to actively encourage them to exercise. Luckily, they very much enjoy playing with their humans, so invest in some good, fun cat toys. Experts say 30 minutes of exercise a day is ideal, but so long as you’re trying to get them to play for a bit each day, all should be well.

It should be reasonably easy to train your Chinchilla cat, especially if you start when they’re young, as these cats are quite intelligent. The main issue you’ll run into here is this breed’s lack of energy. Your kitty will much prefer lazing about to learning something that requires moving.

Grooming this beauty will require time and dedication! The Chinchilla cat is a long-haired cat which means it has a long, full coat and dense undercoat. As a result, it is much more likely to get mats and tangles in its fur. The solution is daily brushing of your pet — about 5 to 10 minutes should do the trick. Not brushing your cat daily could lead to its fur getting so matted and tangled that your pretty kitty could need parts (or all) of its coat clipped.

Another downside to their long hair? Feces may end up beneath their tail and, if not cleaned, it could clump.

Chinchillas also tend to have runny eyes. If this happens, you’ll need to wipe around the eyes gently with a damp cotton ball to clean them up.

Other than that, you should treat this cat as any other when it comes to dental care, ear care, and nail clipping. Brush their teeth (or give them dental treats), clip their nails every 4-5 weeks, and check their ears regularly for mites.

Because the Chinchilla cat is a part of the Persian breed, it can be prone to more health issues than other cats — though most of these issues are relatively minor.

When it comes to how they look, male and female Chinchilla cats aren’t very different. The only real difference comes in their size. Males can end up at over 12 lbs, while females stay between 8-10 lbs.

The largest difference between males and females will be in their behavior before being spayed or neutered. While unneutered males may be a bit more affectionate at times, they can also be much more aggressive than females, which can lead them into fights with other males cats. Meanwhile, unspayed females may become more affectionate during a heat but also become anxious and loud. Unless you want to breed your cat, it’s always a good idea to get your pet spayed or neutered.

Chinchilla cats are gorgeous kitties who love laying around and receiving attention, making them wonderful pets for the right person. Due to their long coats, however, they require quite a bit of grooming. If you don’t think you’ll have time to brush them every day, this breed might not be a good fit. They also come with a handful of potential health issues due to their flat faces that you may not want to deal with. If you have the time and attention to give to one of these lovely creatures, though, they will absolutely make a great companion!

Indoor vs. Outdoor Cats: Should Your Cat Be Free to Roam?