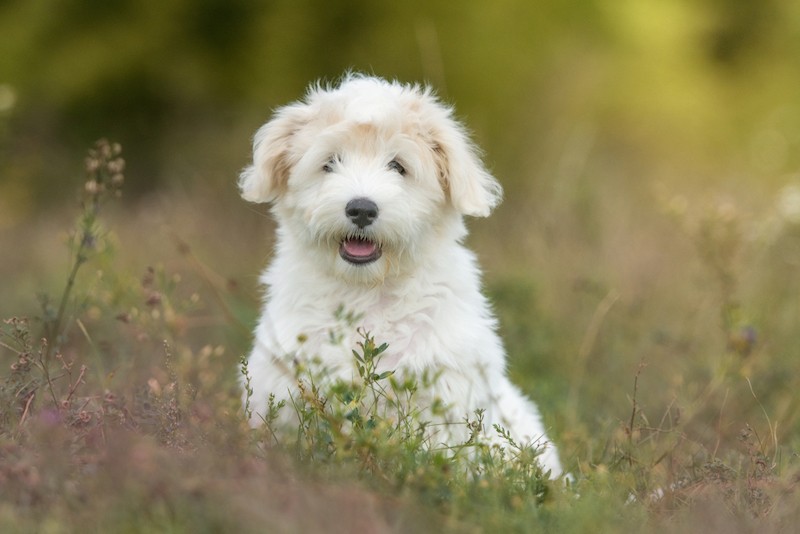 The Coton Beagle is a cute mix but is a challenge to find since the purebred Coton de Tulear parent is not that popular yet. Since these dogs are new, they have not been used for breeding many hybrids, and those they have bred are more of a specialization for breeders instead of a primary focus.

Coton Beagles are a joy to have around, though. They typically inherit the Coton de Tulear’s fluffiness and the Beagle’s fun, curious nature. They are cheerful dogs and sensitive to most people’s emotions.

Coton Beagle Puppies — Before You Get One

3 Little-Known Facts About the Coton Beagle

1. Beagles originated in England in the 1300s, although the French might have named them.

Beagles are an older dog breed and have seen numerous changes in their overall appearance over the years. Their purpose has remained much the same, though. Since their beginning, they have been used for hunting small game like rabbits because they make such excellent scent hounds.

We are not entirely sure what these dogs were originally called, since the written record of their current name was first found in 1475. Some of their genetic histories suggest that the breed might be even older than we currently believe, perhaps one of the Romans’ pack hounds.

Even the origination of their name is contested. Some believe that it comes from French, which means “open throat” in the language due to their baying noises. However, many more believe that Beagle is the Old English word for “small.”

By the time the 19th century rolled around, there were many different sizes and shapes of the Beagle, since many other Beagles were popular at the time.

Even in America, the Beagle was one of the first dogs bred in the colonies. They were first noticed on U.S. soil in 1642 but looked dissimilar to those we have today. After the war was over, they began to import English beagles. The Beagle became much more similar to those we know and love nowadays.

2. The Coton de Tulear is one of the few dogs that has originated in Madagascar.

The Coton de Tulear might seem to some people like a lovable, long-haired Maltese. However, they have an entirely different upbringing. They always seem to be smiling and happy and have been slowly but steadily growing in popularity since their introduction to the States.

The Coton de Tulear is a relatively newer purebred dog. They were only thought to be bred in the 1600s and come from Madagascar. The belief is that they were initially mixed with French dogs that colonizers brought with them and the native dogs on the island.

There are few records for this breed, so it can be quite difficult to know which breeds they did originate from, although they might be related to the Italian Bolognese and the French Bichon.

They were thought to be lap dogs to the wealthy and ruling families in the city of Tulear within Madagascar. It is this spoiled breeding that has given them their lovely, calm personalities.

There is not a clear time or reason given for the development of the Coton Beagle. They were initially developed in 2004, along with the creation of many other designer dogs. When this trend became popular, the Coton Beagle was slightly easier to find. However, it is quite a challenge to locate a breeder for them now.

Temperament & Intelligence of the Coton Beagle 🧠

The Coton Beagle is a curious little dog with a happy personality inherited from both of their parents. They are quite intelligent because both the Coton de Tulear and the Beagle are smart dogs. The Beagle can use this intelligence to be mischievous, so you might need to watch for their antics.

The sweet disposition of this dog accompanies a sporty vibe from the Beagle. They love a good adventure and will be happiest when they get to explore somewhere new. They are lovable with a soft coat that is often somewhere in between that of the Coton de Tulear and the Beagle. They have droopy ears and an inquisitive expression.

These dogs like to please you and are easy enough to train. They tend to have a calm demeanor inside the house and might be jumpy and energetic outside.

These dogs are an excellent choice for families. They are a small to a medium-sized dog that won’t have much of a chance of accidentally injuring small kids when they play together. They are lighthearted and generally patient.

That said, it is not the best idea to leave young children alone with the Coton Beagle. They still both need to be taught how to interact appropriately with each other.

This breed is generally quite good at getting along with other pets. The Coton Beagle likes to play around and have fun. Combined with not having much of a territorial streak, they often do better in homes with more than one dog to keep them company.

Since a Beagle does have a prey drive, it is best to socialize them slowly and early to keep smaller animals safe. Watch them carefully when first introducing them to smaller rodents and cats.

Things to Know When Owning a Coton Beagle

This medium-sized breed has a medium-sized appetite. They need around 1.5 to 2.5 cups of food each day, more if they lead an active lifestyle. It is best to get them food that suits their size and their level of activity each day.

Coton Beagles are thought to be medium-energy dogs, and they can adapt to a range of different activity levels. They can be quite lazy dogs but have more of a proclivity toward being active and energetic. They love to play around and have a good time when given the opportunity.

Try to give your Coton Beagle at least 45 minutes of activity each day to keep them in good shape. This can involve walking them in your area, taking them for short jogs, bringing them on hikes, or taking them to a local dog park. They also tend to excel at agility sports.

If you prefer to walk your dog for their normal daily exercise, aim for 7 miles each week.

Training the Coton Beagle is relatively easy because they have such amiable personalities. Both the parental breeds have a small stubborn streak, but this doesn’t tend to show itself too much in the Coton Beagle.

During training sessions, keep it consistent so they quickly understand what they should be learning. Reward good behavior with plenty of positive affirmation because they will be happy to know that they are making you happy in return.

The Coton Beagle can be low-maintenance when it comes to their grooming standards, depending on which parent the dog favors. If they favor the Beagle’s coat, they will have straight, more wiry fur that takes little to groom. However, the Coton de Tulear coat is fluffier and might need regular grooming to stay in good shape.

Beyond taking care of their coat and brushing them multiple times a week, giving them baths about once a month is necessary. They tend to develop a bit of a doggy smell, and this frequency of baths will keep them smelling fresh and clean.

Don’t forget to clip their nails about once a month or as needed. Since they often have droopy ears, they need to be cleaned at least once a week. Check them to keep them free from moisture and any accrued debris. Brush their teeth at least once a week, preferably more, to prevent dental issues.

The breeding between the Coton de Tulear and the Beagle gives the dog a bit more hybrid vigor. They tend to be quite healthy, but it is still valuable to maintain their veterinary appointments.

There are currently no recognizable differences between males and females of this breed.

Although it can be challenging to locate breeders for this breed, the Coton Beagle is highly adaptable and an excellent choice for any family. They fit well in an apartment space, and their patience makes them excellent choices for a child’s companion.