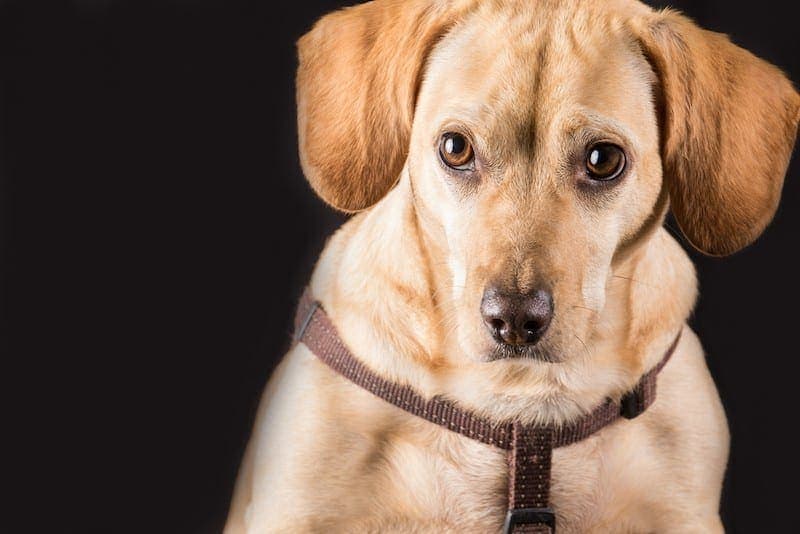 It’s an unlikely mix. The Labrador Retriever is tall, well-proportioned, and lean; the most popular dog of all, according to the AKC. On the other hand, the Dachshund is abnormally long, slung low to the ground, and has the nickname of a wiener dog. Finding two breeds that are more opposite would be difficult. But somehow, when you cross a Lab and a Dachshund, the result is cuter than you’d think. The Labrador cross sausage dog is an adorable combination.

This designer dog breed isn’t officially recognized yet, so you might hear them called by many different names. They’re often referred to as Dachsadors, Doxadors, and Wienerdors, among other names.

But the mix starts to make sense if we look at the temperaments of these two breeds instead of their physical characteristics. Both are known as loving, loyal, and affectionate pets that make excellent companions. Thankfully, the resulting Dachsador follows suit. These dogs are incredibly loving and affectionate pets that want to curl up on your lap any time it’s open.

If you find that the Dachshund is a bit too short or its legs are too stumpy, or maybe you love the Lab’s temperament but want a smaller dog, then the Dachsador might be the perfect fit for you.

Dachshund and Lab Mix Puppies – Before You Buy…

You’re going to need a firm hand with a Dachsador so that they know what’s expected and who’s in charge. Because of this, they’re generally a good fit for someone with a bit of experience training dogs.

What’s the Price of Dachshund and Lab Mix Puppies?

You might expect Dachshund and Lab mix puppies to be pretty pricey. After all, the Labrador Retriever tops the AKC’s list of most popular breeds.

Lab puppies tend to start at about $1,000. However, they can get pretty expensive if you’re looking for proven bloodlines and top-of-the-line genetics. These dogs often cost as much as $3,000 or even more.

Dachshunds are also pretty expensive. The average price on the AKC marketplace for a Dachshund is about $1,500, though you could find one for cheaper. They also can get much more expensive, often commanding prices as high as $3,000.

But both of those are pure breeds recognized by the AKC, which greatly increases their value. Dachshund and Lab mix puppies are a designer breed and not recognized by any agency. As such, they’re not as highly valued as the purebred Labs and Dachshunds.

This creates another problem though. Breeders would generally prefer to focus on reproducing the more lucrative Dachshunds and Labs. This artificially raises the price of Dachsadors through breeders. Since they could make a lot more breeding Labs and Dachshunds, they’ll usually charge more for Dachsadors to reflect the value of the parents.

If you’re purchasing from a breeder, you could expect to spend $800-$1500 for a Dachshund and Lab mix puppy. Granted, that’s the price for just the puppy. You’ll need to budget extra for the kennel, collar, food, bowls, shots, deworming, microchipping, and more.

But there’s another option; adoption. Dachshund and Lab mix puppies are in shelters all over, and you can find them with a little searching. These dogs are much more affordable than purchasing from a breeder. Adoption generally costs around $300; a fraction of what it would cost to purchase a puppy from a breeder.

1. Hunting is in Their Blood

Dogs get a lot of their temperament and personality traits handed down to them genetically from their parents. Well, the Dachshund and Lab mix got hunting passed down through their genes. Both parents are adept hunters and the Dachsador is no exception.

Labrador Retrievers were originally used as duck hunters. They were expected to retrieve waterfowl, though later this was expanded, and they were used for retrieving many types of game as well.

The Dachshund is a surprisingly skilled badger hunter. Badgers are tough, but the Dachshund is brave and fierce. Plus, it’s able to fit its long but compact body into their dens. They were even used to hunt wild boars!

When you mix these two hunting dogs, it’s no surprise that the Dachsador offspring still has a strong prey drive.

2. They Can Be Quite Difficult to Housebreak

Though Labrador Retrievers are widely revered for their exceptional intelligence, the Dachshund is known more for its stubbornness. Nowhere is that stubbornness more apparent than when you’re trying to housebreak your pup. Unfortunately, Dachshund Lab mixes seem to inherit this stubbornness from the Dachshund side.

You might find that your Dachsador chooses to be difficult to housebreak. This is where their stubbornness often presents itself. You’ll need a firm hand and lots of patience to break this bad habit and finally housebreak your Dachsador!

3. There’s No Telling What You’ll Get

Though your Dachshund and Lab cross will be a mix of the two breeds’ personalities, there are some things you can be sure of. For instance, your Dachsador will be a friendly, affectionate dog. These dogs are loving and loyal to their family and they want lots of attention. They’re almost always lap dogs that want to curl up in your lap and snuggle every chance they get.

In general, Dachsadors tend to be quite smart. They can learn quickly, but the stubbornness from the Dachshund side of the family can often get in the way. Still, these are easy-going dogs that aren’t ever too difficult to deal with. They’re not incredibly high energy since the Lab side of the gene pool tends to even out the more hyper Dachshund genes.

Because these are loving, friendly, sweet dogs, they are perfect for families. They get along well with kids, even young ones. The Lab’s demeanor really shines through in family settings where these dogs assimilate into the family and bond closely with every member. They make great companions for kids and play gently. And since they’re not too large, you don’t generally have to worry about them accidentally hurting the little ones.

Remember, this breed has strong hunting genes. Both parents were adept hunters, so the prey drive is often still strong in a Dachshund and Lab mix. This can be mitigated if the dog is socialized early on though. With proper socialization, Dachsadors can get along well with other dogs and even cats.

Things to Know When Owning a Dachshund Labrador Mix

When it comes to food, Dachsadors are pretty simple. They don’t have any specific dietary requirements. In general, they do well on high-quality, dry dog food that’s meant for their stage in life. Puppies do best on puppy food, seniors on a senior food, etc.

These dogs aren’t particularly high energy, so they don’t need any special blends or foods. Any dog food that is made from whole-food, natural sources should suffice.

Luckily, the Dachsador doesn’t have excessive exercise needs. 20-30 minutes of physical activity each day should suffice, though more isn’t going to hurt. These dogs are generally quite playful and ready to have fun anytime you are. They love a good game of fetch or a brisk walk around the block. A backyard is also great for these dogs, though not necessary. Since they’re not very large and don’t need too much exercise, these dogs can even be kept in an apartment.

Dachsadors are smart and they want to please you. However, they’re also quite stubborn at times, thanks to their Dachshund parents. This can make them much more difficult to train than you might expect. And this isn’t just related to housebreaking. All types of training can be more difficult because of that stubborn streak.

Dachsadors aren’t very high maintenance. They have short, wiry coats that don’t shed too much. A few minutes of light brushing each day will keep everything in excellent order. Aside from that, these dogs only need the minimum. Keep their nails trimmed and their ears and teeth clean and your pooch will stay in optimal health.

One of the advantages to designer dogs is that you can reduce the chances of the offspring inheriting some of the health conditions that either parent are susceptible to. Because of this, hybrid dogs are often healthier with fewer health concerns to worry about. This is the case with the Dachsador. This breed is generally pretty healthy, but there are a few minor concerns that are worth keeping an eye out for.

Intervertebral Disc Disease: This inherited disease of the back is caused by the Dachshund’s elongated spine. It can result in pain, loss of movement, loss of limb function, and even paralysis.

Seizures: Seizures are one of the most common neurological conditions that dogs experience. A seizure is when the brain ceases to function properly for a short time; often accompanied by muscle spasms, convulsions, and contractions.

Obesity: A dog is considered obese when it is at least 20% overweight. Obesity has become an epidemic today. In fact, 54% of all dogs in the United States are overweight. That includes 20% of the total dog population that is considered obese. Unfortunately, both Labs and Dachshunds are susceptible to overeating, weight gain, and obesity. So, you’ll need to take extra care not to overfeed your Dachshund and Lab mix.

Progressive Retinal Atrophy: Called PRA for short, progressive retinal atrophy is a wasting of the photoreceptor cells in a dog’s eye. Once the cells degenerate enough, the dog will lose sight in the affected eye.

Though the mix might seem unlikely at first, the Dachshund and Lab mix makes for a great dog with an easy-going personality. They’re incredibly friendly and get along well with just about everyone, including kids, which makes them great family pets. These dogs are loyal and loving with tons of affection to give.

Of course, you have to keep in mind that there is no telling what your puppy will turn out like. Each dog will take some traits from each parent, but guessing which traits any puppy will inherit is impossible. Yours could have stubby legs like a Dachshund or long legs like a Lab. Either way, you’re sure to get a lovable companion who is happy to be by your side day and night for the rest of their life.