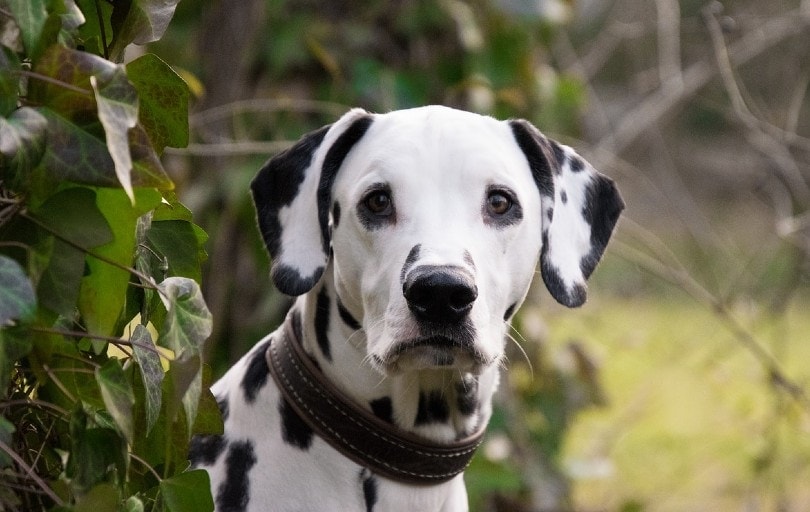 If any dog breed can claim to be an icon, it’s the Dalmatian. These instantly recognizable pups, who have mysterious origins (they’re almost certainly not from the Croatian province of Dalmatia), are beloved as the stars of Disney movies and the watchful companions of firefighters.

Given their fame and their striking spotted coats, it’s no surprise breeders have taken an interest in creating new Dalmatian crossbreeds. On top of that, many of these Dalmatian mixes have been common in the wild for a long time, so they can be found at both breeders and shelters.

We’ve gathered photos of 24 adorable Dalmatian mixed breeds. If you fall in love with any of them, check your local shelter’s website regularly, or work with a reputable breeder and bring one home!

The 22 Most Common Dalmatian Mixed Breeds

Both parent breeds love to run, so Aussie Dalmatians need a lot of exercise to burn off their energy every day. This is a dog that will keep you on your toes!

Basset Hounds were originally bred as hunting dogs, and are fantastic at sniffing out and chasing down prey. While we’re not sure exactly what the Dalmatian’s original purpose was, they were being bred to accompany English carriages by the 17th century.

With those two parents, you can bet a Bassmatian puppy will be curious, energetic, eager to please, and unable to resist a good chase.

A Blue Dalmatian mixes a Dalmatian with a Blue Heeler, also known as an Australian Cattle Dog. The “blue” name comes from the mottling on its gray fur, which looks a little bit blue from far away.

As another mix of two working dogs, Blue Dalmatians are happiest when you give them a lot to do. Farms and ranches suit it just fine, but so do long runs, hikes, and entering physical competitions.

As two breeds with an unmatched knack for doggie tasks like herding, guarding, and running, Border Collies and Dalmatians are a natural match. The Border Collie is one of the parents of the Aussie, so it makes sense that Bodatians and Aussie Dalmatians behave a lot alike.

They’re loyal and loving, but need a lot of exercise and a bit more grooming than a purebred Dalmatian does.

Next on our list of Dalmatian Mixed Breeds is the Boxmation. Purebred Boxers are falling out of favor because of the way their square faces lead to breeding issues. One solution is to mate them with longer-muzzled breeds like Dalmatians. A Boxmatian combines the Boxer’s strength and love of playing with the Dalmatian’s robust health.

If you find Dalmatians too skinny, but English Bulldogs too stocky, the Bullmatian is a perfect mix of both breeds’ best qualities. Bullmatians are big dogs that do best with plenty of space to run around. They make amazing guard dogs, and love to cuddle just as much as they like to run and play.

For those looking to adopt a smaller Dalmatian mix, the Chihuamatian might be ideal. Breeding a Chihuahua with a Dalmatian leads to a loyal family friend who’s small and manageable, but also less prone to the Chihuahua’s territorial issues.

Corgi mixes are known for looking like a Corgi dressed as another dog for Halloween. The Corgmatian is no exception. With a Corgi’s squat legs plus a Dalmatian’s spotted coat, this mix of two of the world’s favorite dogs is a winner.

Corgis are so cute that it can be easy to forget they’re a working breed, just like Dalmatians. A Corgmatian won’t be furniture in your house — it’ll need a lot of toys and playtime to keep its mind occupied.

Dalmatians and Dachshunds might seem like an unlikely pair, but one look at their half-brown, half-spotted coats will convince you it’s a match made in heaven.

With two parents that are intelligent, energetic, and a little mischief-prone, a Dachshmatian will take some work to integrate into your house. Socialize them early, and their prey-flushing instinct will transform into a love for playing with their humans.

Newfoundlands are really big. Dalmatians aren’t exactly dwarves. The first thing you’ll notice about the Dalfoundland is that it’s a huge dog, easily weighing over 100 pounds. You’ll never get a Dalfoundland to do something it doesn’t want to do. Fortunately, they’re also peaceful and trainable and especially love cuddling with human children.

Also called a Dalmatian Springer, this breed mixes a Dalmatian with an English Springer Spaniel to create a mid-sized, high-energy dog. Part hunter, they’re big fans of playing fetch but are also small enough to comfortably live in an apartment — provided they get enough toys and walks every day.

It’s a mix of two celebrity dogs! Half Snoopy, half Pongo, and all energy, the Dalmeagle is a hard worker, a loving friend, and one of the canine world’s best sniffers. Spots and floppy ears make it a completely irresistible blend.

All Beagle mixes love to find things and solve puzzles, so you should make sure your Dalmeagle has plenty to occupy its active mind every day.

You might also find Dalmatian/Poodle mixes called Dalmadoodles. Like a lot of Poodle-crossbreeds, they’re nearly hypoallergenic. They do shed a little, but it’s negligible compared to other dogs (even other Dalmatian mixes).

The word “poodle” comes from an old German word for splashing around in the water. Daloodles live up to their Poodle parent’s reputation as a water dog. Take it swimming, running, or working — Daloodles are down for anything. They’re fond of meeting other animals, especially big farm animals.

The Doberman Pinscher is one of the best canine runners. Dalmatians are no slouches in the strength department either, so if you plan to get a Dobermatian, make sure you can control it on the leash. Dobermatians are as watchful as their Doberman parents, and need training to adapt to strangers and new situations…but once one likes you, it melts into a huge softie.

Next on our list of Dalmatian Mixed Breeds is the Germatian. Not to be confused with the Pointermatian (see #21), a Germatian is a cross between a Dalmatian and a German Shepherd. Germatians are champion work dogs and are extremely willing to be trained. So long as they have a fair, consistent master, you can train them to do everything from herding cattle to shining at obedience contests.

A Germatian’s parents are two of the most watchful breeds, so they also make stellar guard dogs. Make sure their training involves knowing who not to bark at!

Since both the Golden Dalmatian’s parent breeds are beloved for their colors, it might appear odd to breed them together and cancel one out. However, a Dalmatian’s spots and a Golden’s lustrous coat prove to go together like chocolate and peanut butter.

Golden Dalmatians are gregarious schmoozers, who will pretend to mistrust strangers for about two seconds before settling into their laps for the rest of the evening.

A Huskmatian is a great choice if you’ve always wanted a Siberian Husky but live in a climate too warm for its long coat. Huskmatians require a medium amount of grooming and a whole lot of exercise — be sure to have a job for one, or it’ll keep itself busy destroying your sofa.

Jack Russell Terriers are known for a lot of variation within the breed. Selected more for hunting skills than for appearance, they take on a variety of looks, so mixing them with Dalmatians can lead to many different outcomes. Whatever a Jack Russell Dalmatian looks like, though, you can be sure it’ll be mid-sized, sweet, and an energetic friend for all your adventures.

This mix of a Labrador and a Dalmatian is a super-friendly breed with a lovely coat. The Dalmatian’s black freckles go just right with the Lab’s longer locks.

Labmatians are more than just pretty, though. They love to be near humans and are one of the best mixes for families with small children. Adopt one and you’ll win a friend for life.

Pitbull mixes are a double-edged sword. One the one hand, municipal laws can be hostile to Pitbulls. They do take more training than some breeds before they’re OK with humans, especially strange new ones.

On the other hand, who can resist those faces? A well-trained Pitmatian is an affectionate, playful breed with a huge heart. If you’re willing to face a few extra restrictions, you’ll find it really rewarding to own one.

Pointermatians mix two spotted breeds, the Dalmatian and the German Shorthaired Pointer. The result of this Dalmatian mix looks a lot like both its parents, with a short coat that makes it a cinch to groom each week. It also retains its Pointer parent’s hunting instinct. Pointermatians will do best on a lot of land where they’re free to chase birds to their hearts’ content.

Rhodesian Ridgebacks are sloppy, all-loving dogs — definitely life companions, but a bit much for some people. Breeding them with Dalmatians produces a puppy that still loves its masters, but is a bit better at fending for itself.

A Rhodesian Dalmatian mixes both its parents’ coat colors, with Dalmatian spots most commonly showing up on its chest.

Some of these Dalmatian mixes are more common in shelters than others. We always recommend that you try to adopt, not shop, but if you have specific needs in a dog, it’s OK to work with breeders that have strong reputations.

We hope you’ve enjoyed learning about a few of our favorite Dalmatian mixes. These majestic dogs will be leaving their mark on dogs and dog lovers for centuries to come. Long live all the mysterious, beautiful Dalmatians, and their hybrid puppies too!

Dog Bitten by Rat? Here’s What to Do! (Vet Answer)