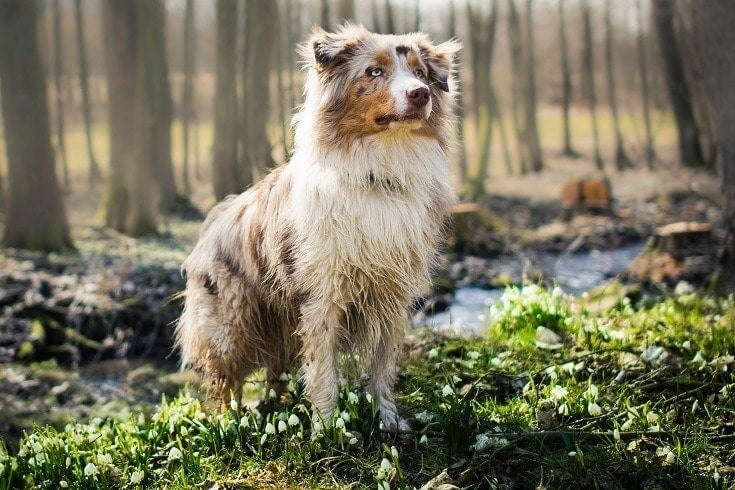 Australian Shepherd dogs are amazing animals that were favorites of the cowboy in the Wild West. It’s a hard-working dog that will herd anything and makes itself useful on any farm. One of the stranger things about these dogs that you might notice is that many of them don’t have tails. In fact, many people ask us if the Australian Shepherd even has a tail.

The short answer is yes, Australian Shepherds have tails, but they don’t all look alike, either naturally or because of docking. Keep reading while we discuss what happens to them and why to help you be better informed.

Most Australian Shepherds are born with long tails. Breeders often dock the tail (cut it off with surgical scissors) when the dog is only a few days old, and the tail is still soft. While the docking process is losing favor, especially for breeds that do it for cosmetic reasons, breeders still dock the tails of working dogs like the Australian Shepherd if they’re going to live on a farm.

Why Dock the Tail?

If you leave the Australian Shepherd dog’s tail intact, you will find it’s quite thick. When the dog is herding sheep or cattle on the farm, it moves at high speed and often needs to change direction quickly. The clunky tail has a habit of getting tangled in its back legs, which would trip up the dog. At best, the dog might lose some time herding and need to catch up. At worst, it fails to make a direction change that would have gotten it out of the way of a much heavier animal. Docking eliminates the danger that the tail can create, so it is an accepted part of the breed standard, which states that the tail is not to exceed 4 inches long. Since docking occurs to almost all Australian Shepherds at just a few days old, it’s easy to see why most people are unsure if they have a tail.

Yes. Even though breeders could not breed a tailless dog through selective breeding, they did get surprisingly close. One in five Australian Shepherds are born with a naturally bobbed tail and will not require any surgery. Unfortunately, two naturally bob-tailed Australian Shepherds cannot breed because doing so can lead to a condition called spina bifida, which is a condition that affects the vertebrae. It can also lead to other problems with the lower spinal cord.

Other Interesting Facts About the Australian Shepherd

Even though many people consider the Australian Shepherd to be a tailless dog, the truth is only one in five are born with a naturally bobbed tail. The rest get them removed through docking. Since it’s part of the breed standard, most breeders dock the tails when they are only a few days old, long before they go for adoption, so there is little wonder why most people don’t know about the tail. However, losing the tail doesn’t have any long-term disadvantages, and if it’s a working dog, the benefits are significant.

We hope you have enjoyed reading over this short guide and found it helpful in answering your questions. If we have helped you learn more about this interesting breed, Please share our look into if Australian Shepherds have tails on Facebook and Twitter.

Can Dogs Eat Chocolate? Is Chocolate Safe for Dogs?

Dog Attacked by Porcupine? Here’s What to Do! (Vet Answers)