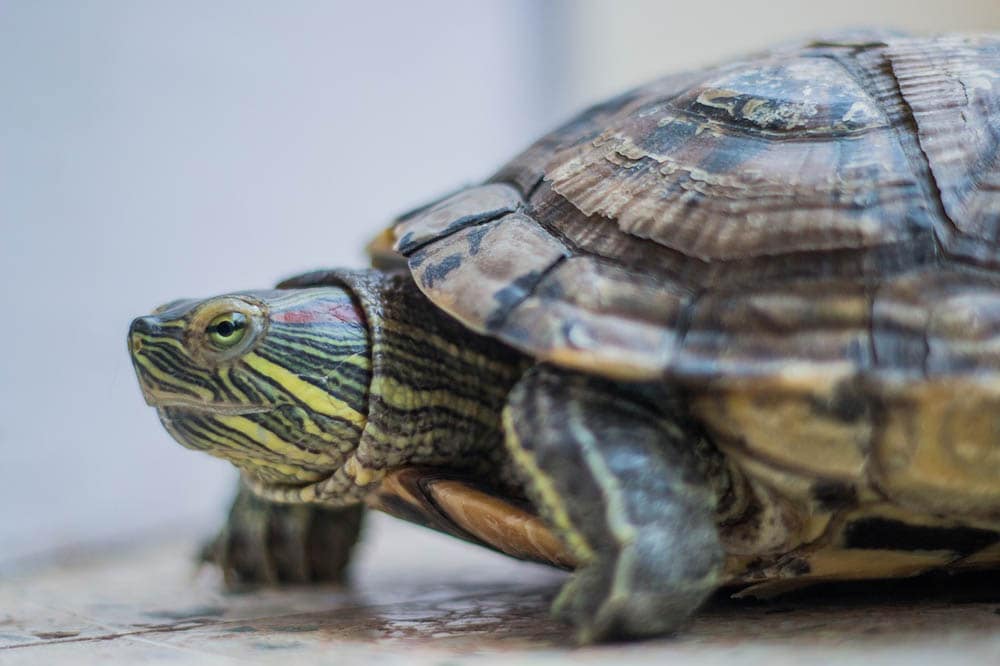 If you already own a cat and are thinking about getting a turtle, or vice versa, you may be wondering if the two can get along. If you live in an area that has wild turtles, they may share their living space with stray or wild cats, too.

It’s important to make sure that the animals you welcome into your home won’t try to eat each other. But do cats eat turtles? The answer is complicated.

Cats will eat turtles if they can and feel the need to do so. The smaller the turtle, the easier time your cat will have with turning it into a meal. However, cats usually can’t or won’t eat the shell. Just because cats can and do eat turtles doesn’t mean they all will be interested in doing it.

Domestic cats don’t seek out turtles to eat as part of their daily diet. Wild cats, however, hunt and eat turtles and any other small prey they can find. If your domestic cat ventures outdoors and finds a turtle, they may not even be interested in chasing it. After all, turtles move slowly. Cats like the thrill of the chase and the eventual capture of small prey.

If your cat does chase the turtle, they’ll be able to capture them quickly. But then what? Some cats just like to play with their prey for fun but not eat it. This is especially true of domestic cats that are well-fed at home. If your cat isn’t hungry, the desire to eat the turtle won’t be there. They could continue to play with them until the turtles are injured, though. A bite or scratch can still cause harm to the turtle’s exposed flesh.

Do Shells Protect Turtles from Cats?

To completely eat the turtles, determined cats must break off their shells. This is possible to do, especially if the turtle is small. Baby turtles are eaten much more easily than larger, adult turtles. The spines and rib cages of turtles are in their shells. If the shells are removed from their bodies, the turtles are nearly always fatally injured.

In some cases, breaking the shell might be too much work for the cat. Nearly all turtles can pull their heads and limbs inside of their shells to hide. Not all turtles have this ability, though, and their limbs are left vulnerable. Shells can offer some protection, but not in every case.

If a cat encounters a turtle with a large, hard shell, they may not consider this reptile to be worthwhile to try to eat. They can lose interest and move on to something easier to consume. If a cat is looking for a meal, in most cases they want to put forth the least amount of effort to get it.

Most cats aren’t going to seek out eggs to eat if they’re hungry. They have hard shells, almost no inviting aroma, they don’t move, and they’re boring.

Cats may play with the eggs if they discover that they can roll them around. If the eggs are small, cats can even pick up and carry them. This can harm unhatched turtles.

Can Cats & Turtles Get Along?

Domesticated cats can get along well with turtles if they live with them in the same house. Usually, the two ignore each other. If your cat shows interest in the turtle, they may just want to check them out but not harm them.

Cats and turtles might be cautious of each other in the beginning. Eventually, they can get used to one another and learn to exist peacefully together. If your cat is too curious about the turtle and is causing them stress, your turtle may stop eating. Stressed turtles can get sick, so always monitor their interactions and separate them if either is showing signs of discomfort.

Your turtle’s enclosure should be in a place where your cat can’t reach or gain access to it. Cats can jump and climb, so just raising the habitat onto a shelf or table may not be enough to keep curious cats away.

Your turtle’s enclosure should have a secure cover to make sure the cat can’t bother them. If possible, a separate room for the turtle, especially when you can’t monitor the cat and turtle together, is best.

Why Do Cats Kill Turtles?

Turtles are slow and don’t provide much chase for a cat. However, this doesn’t mean your cat won’t view them as easy targets.

Even if your cat doesn’t mean to kill the turtle and is just playing, they could cause severe injuries that lead to the turtle’s death. Sometimes they don’t want to kill the turtle to eat it, but just hunt it for fun. They’re acting on their high prey drive instinct.

Cats are curious creatures and enjoy watching anything that moves. If they see a turtle moving around, even slowly, this is enough to capture their interest.

Your cat may like to watch your turtle move around the house or in their habitat. This can provide entertainment for a bored kitty if it doesn’t stress out your turtle.

Be sure your cat can’t swipe at or grab the turtle. Cat claws can hurt turtles even if your cat is just playing.

Cats do eat turtles, but it’s not a regular occurrence. Domesticated cats don’t view turtles as food, but they may still chase or hunt them due to instinct. Prey drives will make them stalk the slow-moving turtles just for fun.

Wild cats can catch and eat turtles. Baby turtles are easier to eat, but cats are strong enough to crack turtle shells and make a meal out of them. If you have a cat and turtle in the same house, always monitor them and never leave your turtle in a place where your cat can easily get to them.

Once your cat and turtle get used to one another, they can even become friends.

Looking for what else cats might eat? Take a look at: