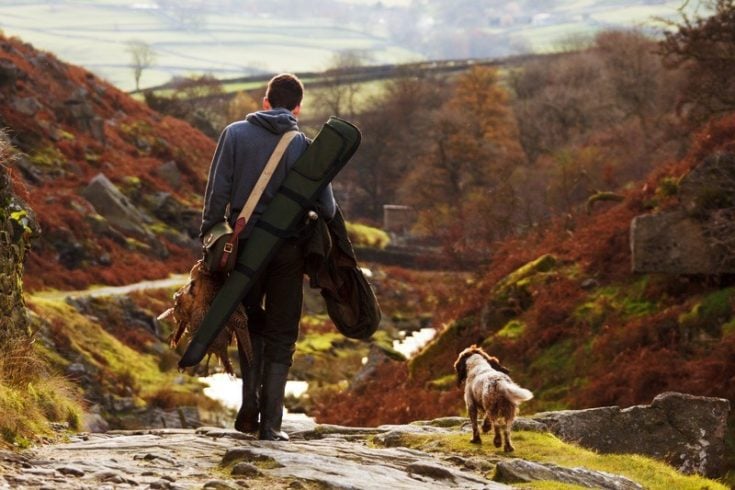 Some dogs are excellent hunters. The thrill of the chase and the strike is just what they love doing best. But how do they fare when it comes to tracking and retrieving game that doesn’t move?

Shed hunting is essentially looking for shed deer antlers after bucks have dropped them for the season. This usually occurs in the first quarter of the year and may push into the early summer months. However, shed hunting by yourself can be difficult, especially if you’re solely relying on trail cam positions.

There are some four-legged companions you can bring along that will not only help you track down those dropped antlers, but also bring them back gently enough for future use in rattle calls or décor. Below are the top 12 shed hunting dogs to serve as your second in command.

When you’re out looking for sheds, there are a few qualities the ideal dog should have. They should have a strong nose, gentle mouth, the intelligence to track and retrieve, and the desire to please.

And there’s no other dog (well, almost no other) out there that encompasses these abilities quite like the Labrador Retriever. There’s a reason why Labs aren’t just the most popular pooch in America, but also the most popular breed for shed hunting as well.

The only other pup that really fetches sheds like a Lab is the Golden Retriever. Goldens were originally bred for retrieving waterfowl and tracking in Scotland. And while they’ve found a new place in society as the idyllic family dog, they still haven’t lost their uncanny ability to track and handle, which puts them as number two on our list of best shed hunting dogs.

When it comes to powerful noses, there’s only a few that can out sniff the Beagle. With 225 million scent receptors, a Beagle can track down just about anything it sets its mind to. That’s after they’ve decided to do so, that is. Beagles have eclectic personalities to say the very least and are often stubborn to boot — but that’s not to say we don’t love them.

The American Foxhound is very similar in appearance to the Beagle and a natural-born hunter. Once they’ve set their noses to the trail, there’s no pulling them away until the job’s done. However, like their Beagle cousins, the American Foxhound can be an extremely stubborn dog and quite difficult to train. But if you start them early, you’ll be hard-pressed to find a more dedicated hunting companion.

With a whopping 300 million scent receptors, no other dog on the planet has the tracking capability of a Bloodhound. Their noses are so accurate that their judgment can actually be upheld as legal evidence in an American court of law. But it’s not just their nose that makes them ideal. They have a focus unseen by many other dogs and the stamina to go along with it. They can literally follow a scent for miles without ever losing track or focus. It’s no wonder they’re on the list for best shed-hunting breeds.

These grey ghosts are just hauntingly beautiful dogs. And they’re dedicated hunters. The Weimaraner has the strength and stamina of a sporting dog with the unbridled prey driver of the fiercest terriers. This makes the Weimaraner an absolute workhorse and powerhouse.

Without regular positive human interaction, the Weim can become intensely high-strung and self-reliant. However, if you keep this pup actively working and hunting, you’ll find a lifelong companion that’ll never leave your side.

The German Shorthaired Pointer takes all the excellent tracking and treeing skills of a Pointer and combines them with the retrieving skills of a Labrador. And they’re top-notch shed hunters when out in the field or woods. They tend to have a bit of a rebellious streak, but that can be overcome with training to develop them into excellent hunting dogs.

Like the Beagle, the German Shepherd has 225 million scent receptors in their nose. However, they track scents much differently than hounds such as the Beagle and Bloodhound. They are able to air scent, which means they do not have to keep their noses to the ground. While not as accurate in a shed hunting situation as ground trackers, they’re still excellent dogs to have due to their exceptional intelligence, eagerness to please, and ability to learn how to perform almost any task.

Often confused for the German Shepherd, the Belgian Malinois is another top-notch sniffer. Best known for their abilities to track Cheetahs, detect explosives, and sniff out cancer, the Belgian transfers those skills over to tracking down shed antlers very well. And like the German Shepherd, they have an uncanny ability to listen, learn, and adapt.

The Pudelpointer is one of Germany’s best-known gun and bird dogs for good reason. They have the stamina and determination to track down game in even the roughest of conditions and do so cheerfully. Their eagerness to track and hunt game is only matched by their love and compassion for their masters and families.

English Setters are the best of the best when it comes to elite bird hunting, and those traits can be transferred over beautifully to shed hunting. They have an excellent nose on them and are muscled enough to make it through any terrain they come across. They also have a mild-mannered personality that makes them generally pleasant to spend a day in the field with.

This sporting pup is an all-around great dog for hunting families. On one hand, the English Springer Spaniel is an absolute sleuth in the field, known for its super-sensitive nose. They are often used for tracking things such as beehives, human remains, and shed antlers. But on the other hand, they make for wonderful family dogs once the work is all done. After a hard day’s work, you’ll find them curled up with you on the couch as if it’s second nature.

Shed hunting can be a good time spent together with your pup in the great outdoors. If you’re a shed hunter, or looking to get into the sport, we hope you found some value in our list of the best dog breeds for shed hunting. Bringing your trusty partner along not only gives them great exercise but a sense of purpose in performing a job.

And even if you come up empty-handed for the day, you’ll have further solidified the bond between you and man’s best friend.

Cane Corso vs. Pit Bull: What are the Differences?