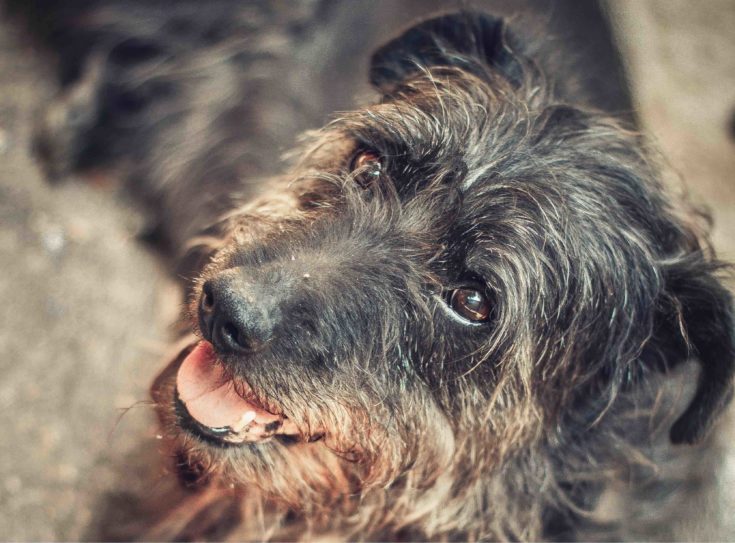 The Doodleman Pinscher is a large, hybrid dog breed, a mix of the Doberman Pinscher and the Poodle. Doodleman Pinschers come in a wide variety of colors, with a short, to medium-length coat that is usually thick and wavy. They are powerful and muscular dogs with long, Poodle-like legs and a long fluffy tail. These dogs are not for everyone, as they can be a handful to train due to their stubborn streak. There is not much known about their origins, other than that they are a relatively new breed thought to have originated in the U.S.A. A good gauge of what to expect from the Doodleman Pinscher is to take a brief look at the parent breeds.

Doberman Pinschers originated in Germany and are often used as police, military, and guard dogs. These dogs are somewhat intimidating yet noble in appearance, with an athletic physique and high intelligence. This makes them one of the most revered protection dogs in the world, and they are likely to put off even the bravest would-be intruder. But they are good-natured dogs that are easily trained.

Despite the Poodle’s reputation as a pampered and spoiled show dog, complete with fancy hairdos and diamond-encrusted collars, they were originally bred as tough working and hunting dogs. They have large and agile physiques, with water-resistant coats that help them stay warm in cold water. They are also one of the most intelligent dogs on the planet, and this combination makes for a formidable hunting companion.

The resulting hybrid of these two legendary breeds consists of the best traits of both parents. Doodleman Pinschers are large and powerful animals that are intelligent and easy to train, with razor-sharp instincts that make them both a great family dog and a loyal guardian and protector.

Doodleman Pinscher Puppies — Before You Welcome One Into Your Family..

Doberman Pinscher Poodle mixes are high-energy dogs that will require tons of patience and consistency to train, a lack of which can lead to an aggressive and possibly dangerous animal, making this is a breed that you should put thought into before committing to adopting. However, with the right training and attention, there is arguably no dog more loyal and loveable than a Doodleman Pinscher, and raising them from a puppy will give you a trustworthy and loyal protector.

1. Doberman Pinschers were first bred by a tax collector.

The Doberman Pinscher was created by Herr Karl Louis Dobermann who was a man with many talents (including dog breeding), but his main occupation was as a tax collector. He would frequently travel around with bags of cash in unsavory neighborhoods and wanted a medium-sized dog that was dignified yet intimidating enough to keep him safe. The resulting breed was the Doberman Pinscher, which achieved that goal and gave him a dog that was highly trainable and obedient yet formidable.

Dobermann unfortunately did not keep accurate records of what dogs went into the breeding process; however, it is speculated that there was a wide range of dogs in the mix, including some other notoriously protective breeds like Rottweilers, various Terrier breeds, and Great Danes.

The classic image of an intimidating Doberman is that of a powerful breed with erect, pointed ears that add to their respect-provoking physique. This archetype, however, is not wholly accurate, as Dobermans have naturally floppy ears. Due to their use as guard dogs, they were frequently involved in fights, and this led to owners cropping their ears and docking their tails to avoid additional injury to these vulnerable areas. This also added to the Doberman’s intimidating appearance. The cruel practice of ear-cropping has now thankfully been banned in most countries.

3. Poodles are an ancient breed.

While Dobermans are a relatively new breed, originating in the late 1800s, Poodles have been around for thousands of years. There are images and artifacts of Poodles from both Roman and Egyptian times depicting the Poodle’s original hunting heritage. Apart from the standard Poodle, they also come in smaller sizes, including the adorable miniature toy Poodle.

Despite the Doberman’s fierce guarding reputation, Doodlemans have many Poodle traits, too, and are sweet and gentle dogs in general. Make no mistake, though, they are still great guard dogs and are highly protective of their owners with an unwavering loyalty.

Dobermans were widely considered one of the most dangerous dog breeds in the world just a few decades ago, but careful breeding and training techniques have made them far less likely to be aggressive. They are now known as obedient and loyal guard dogs, perfectly safe to keep as family pets.

Doodleman Pinschers love to be around people, and provided that they are socialized early and grow up with them, they are great with children too. These dogs are loyal, almost to a fault, and are highly protective of their families. While this means they make great guard dogs, they can often become overly attached to one owner. This singular bond can become a problem for other members of the family when it comes to discipline and training.

Provided that they are socialized early, trained well, and brought up with other pets and dogs, Doberman Pinscher Poodle mixes usually get along fine with other family pets. They do like to be the leaders of the pack, though, and can become rather assertive, albeit well-meaning, when claiming their place.

Things to Know When Owning a Doodleman Pinscher

Doodlemans are large, high-energy dogs with just as large appetites. Their muscular build will require larger than average amounts of protein, which is best acquired from lean meats. There is protein inside commercial kibble, but it is usually derived from vegetable sources and is thus somewhat inferior. This means you should aim to give your Doodleman the best possible quality dry kibble possible, ideally supplemented with canned food or meat. This will help provide your Doodleman with additional moisture, though as with any dog, constant access to fresh, clean water is essential.

Many commercial foods contain harmful “filler” ingredients, so be sure to check the ingredients list before purchasing. Dairy products, excessive grains, and fatty meats should also be strictly avoided, as these can swiftly lead to health issues.

Doodlemans are high-energy dogs that require a great deal of regular exercise. This exercise should be regular and consistent and combine high-intensity exercise, like running, walking, and cycling, with mentally stimulating games. They will love ball games, fetch, and running activities because they have large amounts of endurance and stamina, and you’ll be hard-pressed to tire them out. Without this regular physical and mental stimulation, Doodlemans can become agitated, causing them to become destructive and even aggressive.

The golden rule in training Doodlemans is consistency. The intelligence of Poodles combined with the protective nature of Doberman breeds means that they will notice changes to their routines and can become confused and distressed when this is not adhered to. These parent breeds have a long history of specific tasks, and they will thrive when given important and specific instructions.

Early obedience training is essential for Doodlemans. We recommend positive reinforcement training for these dogs, as any aggressive or heavy-handed forms of training can awaken the Doberman’s guarding and protective instincts. These dogs are in-tune with human emotions and will pick up even the most subtle shifts in energy from their owners. This means you need to be confident and display leadership with these dogs so they are fully aware of whom is in charge.

That said, they are also eager-to-please animals, and this will work hugely in your favor when training them. They will benefit from plenty of praise for good work, rewards, and exciting and high-energy tasks. Any form of harsh physical correction should be strictly avoided with these dogs. Not only does this break trust between you and your Doodleman, but it can also cause aggressive behavior and make training something dreaded as opposed to enjoyed. Basic command training can begin as early as 10 weeks with these intelligent dogs. This will include commands like “sit,” “stay,” and “fetch,” which will quickly be picked up by your Doodleman.

Doodlemans are a fairly high-maintenance breed due to their Poodle genetics. Daily brushing is needed to prevent matting and skin issues. A Poodle’s coat never stops growing, so your Doodleman will need regular trimming of their coat too.

Bathing should be kept to a minimum, and we recommend bathing only when necessary to prevent dry skin. Excessive bathing can deplete your dog’s coat of their natural and essential oils.

Both Dobermans and Poodles are relatively healthy and robust breeds, and the same goes for Doodleman Pinschers. If they are exercised regularly and have balanced diets, they will usually live a good life with few health issues.

However, there are common problems that are reported among Dobermans and Poodles that may carry over into Doodlemans.

Dobermans commonly suffer from dilated cardiomyopathy, which is a swelling of the heart. Von Willebrand disease is another common hereditary disease that may be passed on to your Doodleman. Cervical vertebral instability is a common neurological disorder caused by the compression of the spine in older Dobermans. Milder conditions include hypothyroidism and bloat.

With Poodles, common health concerns include hip dysplasia, progressive retinal atrophy, and Addison’s disease. One of the most common problems that affect around half of Poodles worldwide is sebaceous adenitis, which is an inflammation of the sebaceous glands. This disorder can lead to skin disease and hair loss.

Neutering males and spaying females have a host of health and behavioral benefits, including the prevention of some cancers.

Males are usually taller, heavier, and larger than females, but only by an inch or two. They are also usually more playful, social, and more likely to bond with multiple members of the family. Females are quick to train, will bond more closely with one owner, and are generally gentler around children.

Remember that no one gender is better than the other, but they may only be better according to your wants and needs.

Doodleman Pinschers are an intelligent, high-energy breed that requires a large amount of physical and mental stimulation. They must be gently and correctly trained to avoid any aggressive behavior. When trained correctly, you’ll be hard-pressed to find a more loyal and protective dog.

The intellect and rich history of the Poodle combined with the loyalty of Dobermans makes for a great combination breed. They are great with children and other pets and easy to train with their eagerness to please their owners. Doberman Pinscher Poodle mixes are an ideal dog for active owners who enjoy being outdoors, and they will make a great exercise companion.

If you are looking for a loyal family dog as sweet and gentle as they are protective, the Doodleman Pinscher is an ideal choice.