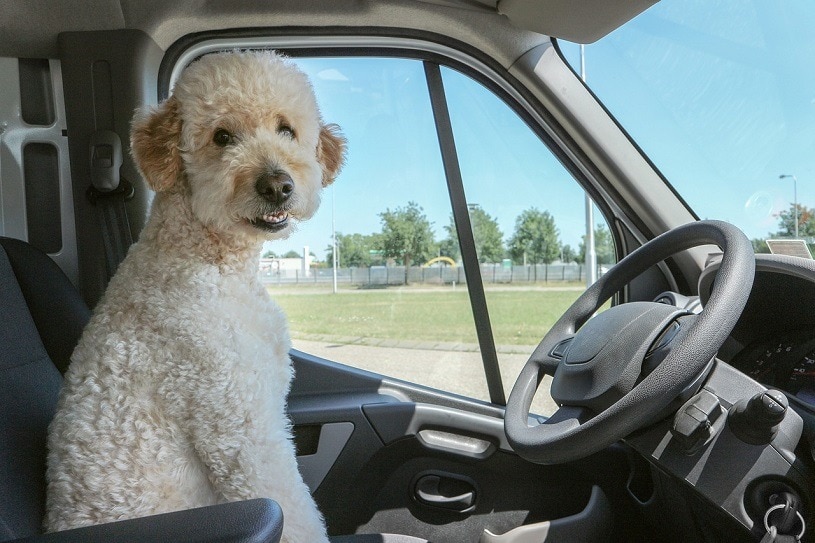 Double the Doodles, double the fun — two Doodles really are better than one! A stunning combination of two Poodle crossbreeds, the Goldendoodle and Labradoodle, Double Doodles are some of the kindest and most attentive dogs you might ever meet.

Intelligent, friendly, and always happy to have their luxurious coats groomed, the Double Doodle — also known as a North American Retriever, Golden Labradoodle, or Double Doodlepoo — is a wonderfully adaptable companion dog. Developed as recently as 15 years ago, they’re a popular newcomer to the designer dog scene that is attracting hordes of dedicated owners.

Whether you’re thinking of bringing a Double Doodle into your home, or just curious about this adorable designer dog breed, we’ve got you covered.

Double Doodle Puppies – Before You Buy…

Deciding on the right breed of dog to add to your home is no easy task. This is doubly true for designer dogs like the Double Doodle, as they possess not only the qualities of each breed that contributed to their genetic heritage, but also new qualities unique to their own breed.

To understand the Double Doodle, let’s take a closer look at the three breeds that comprise its heritage: Labrador Retrievers, Golden Retrievers, and Poodles.

Labrador Retrievers hold the title of “most popular dog” in many nations around the world and are often used as disability assistance dogs. Originally used as fishing dogs in eastern Canada, they’re renowned for their intelligence and hard-working nature, as well as their generally friendly demeanors.

The Golden Retriever was originally bred in Scotland, where wildfowl hunting was a popular sport among the well-to-do. Trained to retrieve birds after they had been shot out of the sky, this breed had to be capable of retrieving both on land and in the water. Known for being kind, friendly, and confident, the Golden Retriever has been a companion to many families since the time of its inception.

Poodles, available in Standard, Miniature, or Toy sizes, are ranked as the second most intelligent dog breed in the world behind the Border Collie. A natural athlete, the Poodle takes well to training in dog sports from agility to herding to circus performance. Their sociable and energetic natures make them best suited for owners who have plenty of time to dedicate to their training.

Combine those three breeds into one designer dog, and what do you get? A wonderfully friendly, confident, and energetic dog who is highly intelligent and imminently trainable. Double Doodles are a fine example of crossbreeding done right, wherein the resulting dog enjoys many health benefits and a naturally pleasant disposition.

Costs of Double Doodle puppies can vary widely due to the popularity of their parent breeds and the possibility of exhibiting them in dog shows. Expect to pay anywhere between $1000 and $5000 for a Double Doodle puppy, or even more for an established breed line with superior pedigree.

1. Double Doodles May Not Technically Be A Designer Dog

2. They’re A Great Option for Anyone with Mild Allergies

3. They Have a Connection to A Famous Author

On their Goldendoodle side, Double Doodles have a far back connection to the great Charles Dickens, the famous author of A Christmas Carol and Oliver Twist. Goldendoodles were originally bred in 1969 by Monica Dickens, the great-granddaughter of this well-known writer.

Temperament & Intelligence of the Double Doodle

Inheriting the best attributes of all of its parents, the Double Doodle dog is a remarkably intelligent dog with a genuinely friendly and pleasant demeanor. Double Doodles are loving and caring for adults, children, and other animals alike, but sometimes their long-limbed clumsiness can be the cause of unintended mishaps.

Double Doodles are one of the premier designer dog breeds for families. With fur that resembles a plush teddy bear, deep and loving eyes, and adorably floppy ears, kids of all ages are sure to love them. Because they are on the larger side of dog breeds, however, you should always keep an eye on them around smaller children to prevent accidental injuries.

With even a small amount of obedience training, Double Doodles can be encouraged to get along with dogs, cats, and even smaller animals. They’re naturally sociable and will want to make friends with any animal they come across.

Without proper training, though, their retrieving instincts can get them into trouble with small animals — most of whom will not want to be carried in your Double Doodle’s mouth to be delivered to your lap.

Things to Know When Owning a Double Doodle:

Do you think the Double Doodle might be the right dog for you? In addition to their substantial upfront costs, you should make sure that you’re prepared to provide them with enough time and attention, as well. Read along through the following sections to learn what’s required for a Double Doodle’s care once it’s in your home.

As a large and energetic breed, the Double Doodle requires quite a bit of food. Plan on feeding them up to three cups of dry food per day, split into two to three meals. Depending on the variety of food that your vet recommends for your Double Doodle, monthly food costs will average between $40 and $60.

Double Doodles are an exceedingly high energy breed that loves both mental and physical stimulation. Plan on long daily walks, consistent training for new tricks, and more intense activities like agility training, fetch, or swimming. Because of their high exercise requirements, Double Doodles are not a great choice of pet for anyone living in an apartment.

Intelligent and always eager to please, the Double Doodle takes readily to training of all sorts. They pick up on new commands quickly but can also possess a rebellious streak that requires firm, gentle insistence on the training at hand. Many Double Doodles have been known to respond exceptionally well to treat-based training reinforcement, as they are highly food motivated.

Allergy sufferers rejoice! The Double Doodle is a hypoallergenic dog that barely sheds at all, even in the springtime when most other dogs will cover your couches in hair. A weekly brushing will keep their coats looking lustrous and bouncy, and an occasional visit to a professional dog groomer is recommended to keep their coats healthy and any errant hairs trimmed.

Being twice removed from their purebred ancestors, Double Doodles enjoy a robust constitution and exceptionally good health in most cases. Some conditions that occur rarely in Double Doodles include:

Any Double Doodle can take after either of its parents, and there are relatively few sex-specific differences commonly seen in this breed. Look instead for individual personalities, as a Double Doodle’s sex is not a reliable indicator of its overall temperament or trainability.

Any dog descended from so many intelligent, lovable breeds is destined to be wonderful, but the Double Doodle seems even more so than expected. If you’re looking for a loving, high-energy dog that’s great with kids and other pets, the Double Doodle should definitely be near the top of your list.