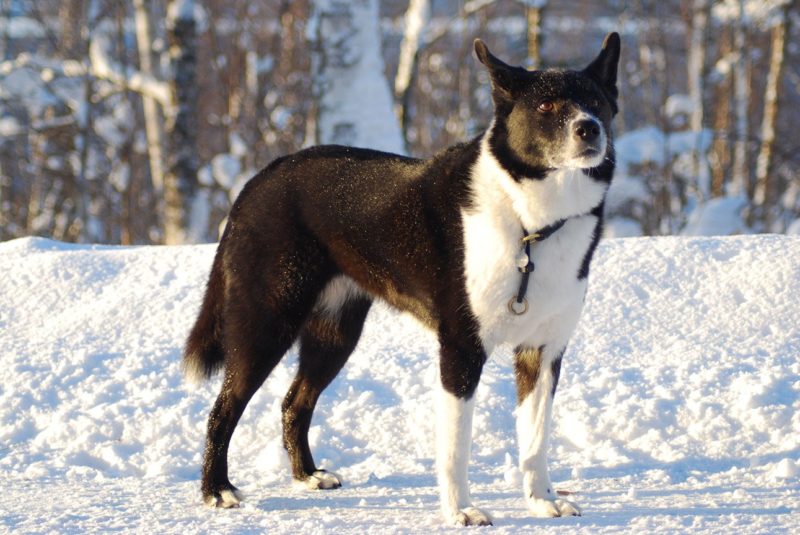 Although Finland only has a handful of native dog breeds, several of them are iconic and have become popular companions outside of their homeland. Although you may not recognize these breeds immediately in the local dog park, demand for breeds like the Finnish Spitz and Bear Dog have been slowly increasing and for good reason. The breeds are expert working and hunting animals and loving family dogs. Finland has eight native dog breeds, and we put together this list = to help you get to know these beautiful dogs better. Here are the Finnish dog breeds to know:

Originally bred to hunt small game, this popular Finnish breed is now a friendly and gentle family companion. They are known as “talkative” dogs, due to their heritage of barking when they spot prey. This breed is the official dog of Finland, where they are still commonly used for hunting, but they are mostly kept as pets in the U.S. due to their lively, intelligent, and animated character. What a beautiful Finland dog!

The Finnish Lapphund has a history of herding reindeer, as these animals were kept and domesticated by the nomadic Sami people. Finnish Lapphunds are popular in their homeland but are rarely found outside of the Nordic countries. As you can imagine, these dogs do well in cold weather and need to be carefully monitored in hot climates.

These friendly, energetic, and agile dogs were originally bred as herding dogs. As such, they require a great deal of exercise and directed activity to stay happy. They are intelligent animals that thrive when given a job to do, and they are known to be highly vocal while doing it — almost constant barking is a surefire trait of this breed.

This breed is regarded as a national treasure in their native Finland, and their unmatched agility and fearlessness were utilized for hunting large game like moose, wild boar, and even bears, earning them their name. Even with the influx of non-native breeds to Finland, the Bear dog remains one of the top 10 most popular in the region.

The Finnish Hound is a true working dog, is well-respected as such, and is bred to hunt and scent both large and small game. To this day, they are seldom kept as companion animals, and outside of Finland, they are a rare breed indeed. But in their homeland, they are still a popular scent hound, an expert at tracking scents for hours on end without getting tired.

A post shared by STILL In The DOG World (@stillinthedogworld)

This spitz-type Finnish breed was originally bred as a hunting dog but is now far more popular as an energetic and friendly companion. They were primarily used for hunting squirrels when those animals’ fur coats were more popular, and they were experts at their job, using a combination of scenting, speed, agility, and precise hearing to get their prey.

The Karelo-Finnish Laika is a Spitz-type breed with origins in both Finland and the Karelia region of Russia. This dog and the Finnish Spitz were considered one breed prior to the 20th century, but Russia renamed the breed after the Russian Civil war. The two breeds are similar, but the Karelo has a wide range of colors and markings and is not officially recognized by any kennel club at present.

The Lapponian Shepherd originated in the South of Finland, despite its name, and disappeared in the late 1980s. This was largely due to the Finnish Hound and the Lapponian Herder being designated under the same name for a time, resulting in all three breeds interbreeding. Although the breed is now extinct, it still exists in the genetics and bloodlines of today’s Finnish Hounds.

Can Dogs Drink Powerade? Is Powerade Safe for Dogs?

13 Dogs That Are Similar to Yorkshire Terriers