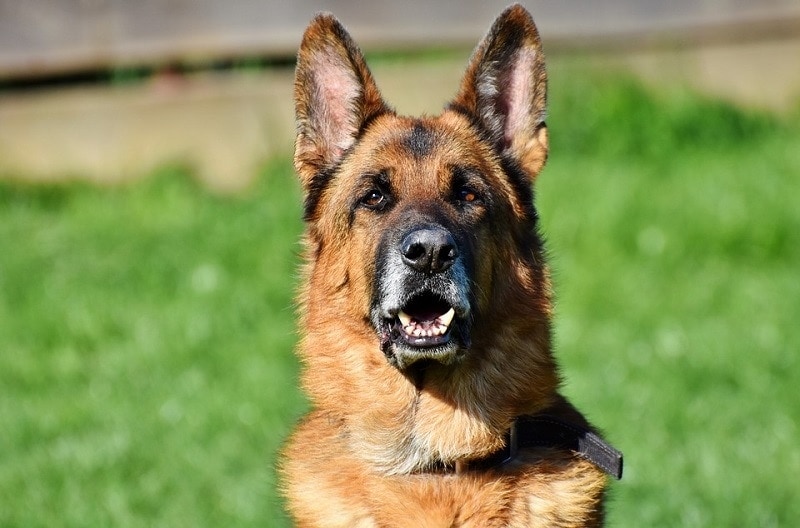 The German Shepherd Dog breed (GSD), like most, is sexually dimorphic, meaning the male and female differ in both height and weight as they develop and grow. They are a beloved breed for many different reasons, one of which is their distinct look, size, and shape.

Growth and development of the GSD from a pup can be a roller coaster of a ride if you aren’t sure what their size and height milestones are. So, if you’re looking for the definitive guide on how tall they should be when they take up half your bed. Or what they should weigh when they step on your toe, you’ve found it.

We’ll give you the details on everything from teething to behavior, vaccines, food intake, grooming, growth stages, and more.

Facts about the German Shepherd

The German Shepherd standard is part of Captain Max Von Stephanitz’s legacy. He developed them as the perfect working dog for both herding and guarding duties.

They were introduced to the US by the troops returning from World War One. Where they were more commonly used as guard dogs, police dogs, and search and rescue dogs.

In more recent times, they have also become a popular assistance and therapy dog. As well as now being a firm favorite with families. Ranking 2nd in their poll of most popular breeds, according to the American Kennel Club.

The below charts show the average weight and height of a GSD at intervals up to three years. Taking away some of the guesswork involved in less detailed charts that you may find elsewhere online.

It’s all well and good telling you what size and height your pupper will be at certain ages, but what does that mean in real terms? How about some details regarding their feeding habits, behavior, medical needs, grooming regimen, and exercise requirements? In this section, you will find everything you need to know to keep them healthy and assist with things such as toilet training and teething.

It’s important that the puppies stay with mom for a minimum of eight weeks for food, hygiene, and comfort. She will discipline them and make sure they learn to be independent. They then begin to go to the toilet independently and venture away from mom. Mom’s milk production will slow, and your pup will wean onto semi-solid foods.

At week eight, they play, can be housebroken, and bark when startled. The famous GSD ears will start to stand up, and you can begin leash and crate training. They must be handled and groomed and realize that human commands and dominance is the norm. It’s a good time to introduce them to other animals and small children as well.

During this time, the mother will nurse the pups until they are old enough to begin eating puppy mush, which is softened kibble. Always feed your GSD a large breed puppy formula (we’ll explain why below). Allow puppies to eat as much as they like at each meal.

At six to eight weeks, their first shot from the vet is due. It is their primary vaccination DHLPCC jab (Distemper, Adenovirus type 2, Leptospirosis, Parainfluenza, Parvovirus, and Coronavirus).

12 weeks is a turning point for your pup. Their coordination will come on in bounds, as will their learning and social skills. They will be eager to learn but easily distracted, so have plenty of patience. If you become angry, it will stunt development if they become fearful of you.

This is the perfect time for socializing with puppy pals as it’s what is known as the ‘seniority period’ where your pup will learn how to dominate and fight for his position in the pack. They will bite and nip, so it’s down to you to show them who’s boss.

Your pup is officially into the juvenile period now. All of his puppy teeth should be developed by now and are normally very sharp. So, beware of your fingers when playing.

At 12 weeks of age, puppies can start to eat three to four set meals a day with measured amounts. The 2nd DHLPCC jab is also due, so a visit to the vet is in order.

Your GSD pup will start losing milk teeth at this age, which means lots of chewing. Be sure to let him know what he’s allowed to chew and what not to chew. Purpose made dog-approved chew toys are best, not teddy bears or old shoes. He won’t know the difference between old and new.

As they grow through this period between three and six months, GSD puppies are more juvenile than baby. They will be more boisterous and energetic. But on the plus side will feed easily, be more friendly with animals and people alike, and more than likely be housetrained if you have managed them correctly.

They will be stubborn at this age when training and could ignore you, or not come when called. The best approach is to ignore any sassy attitude and only praise and fuss when back to being obedient.

Your GSD puppy is now a young adult. His internal organs and systems are fully developed and functioning as they should, while the skeleton is still growing. His full set of adult teeth should be present and correct.

Your GSD is now becoming independent and will want to roam different areas and interact with their world on many more levels. Be aware that they could weigh 50 lbs at six months, so caution is needed with control and safety as they explore.

Your pup can go through a fearful development stage at this age where he is scared of things he wasn’t before. He may also seemingly forget commands that he has been taught. It is best to ignore, not mollycoddle, any fearful reactions to new things to not reinforce the negative behaviors.

By six months of age, you can reduce the feedings to three per day, now paying attention to total calories consumed. Between the ages of four to six months, he will shed his puppy coat too.

At this age, your GSD will look like an adult but might still exhibit some puppy behaviors. He might still be a bit goofy, gangly, and stubborn when it comes to training. So, it’s important to know how to encourage good behaviors.

German Shepherd females are reaching sexual maturity at this age. They may have their first estrus (heat) period. So, be mindful of letting them off lead during this time if other dogs are around.

At 9 months, your GSD can be tested for heartworm and treated if needs be. Speak with your vet about this for more detail.

You can add small amounts of solid adult formula into the puppy food to get him used to texture.

Your German Shepherd will be looking adultlike now, and their attention span and eagerness to learn will be peaking. Making it the optimal time to stimulate them as much as you can with obedience training and work activities.

Your GSD should be comfortable in all situations, and with all types of company as their bond with humans should be well established. Their unique personality and quirks should be apparent and set them apart as your dog. They will have developed vocal and body language traits that you recognize and use for their needs.

If male, he will be reaching sexual maturity and cocking his leg when urinating. He might also be looking to challenge dogs and humans for the title of pack leader. The key to cementing all your hard work so far is to be consistently firm with any boundaries he tries to push.

By 12 months, they should be on adult formula only.

When Do German Shepherds Stop Growing?

German Shepherds stop growing between two and three years. This is when they fill out too. It starts to slow at around the age of one, but he will continue to grow until he reaches maturity. During this time, they are considered to be adolescents. This is the same for their mental maturity too.

There are different stages within this time frame before maturity. And these are the neonatal stage (one to two weeks), the transitional stage (two to four weeks), the socialization stage (four weeks to three months), the juvenile stage (three to six months), and the adolescent stage (six months to two years).

How Does Neutering/Spaying Affect My Dog’s Growth?

Research has shown that neutering dogs can affect their growth. But how exactly? Well, it’s not entirely clear, and there is more research yet to be done.

But early indications show that early neutering can increase the length of time that the bone grows. Meaning potentially taller dogs. But this also poses questions about whether this affects the joint alignment and whether it can cause any problems. And for the German Shepherd breed and his heightened propensity for hip dysplasia, this is a concern to be aware of.

But waiting for full skeletal maturity also poses risks. Because neutering for females can reduce mammary cancer. If spayed before her first heat, it can eliminate the chances of this type of cancer altogether.

Overall, how neutering affects your dog’s growth is something to discuss with your vet. As they will be able to offer you tailored advice for your German Shepherd.

Dangers of Growing Too Quickly or Stunted Growth

The dangers of growing too fast can affect their skeletal development. If his bones grow faster at which they are supposed to, his body doesn’t get the chance to develop as it should. Conditions caused by growing too quickly are joint dysplasia and osteochondrosis.

By feeding him a kibble that is designed for large breed puppies will help control the rate at which his bones grow. This is because they have the optimum ratio of calcium and phosphorus levels in the food. So, always feed him large breed puppy food during his developmental stage.

Stunted growth can also be caused by a condition known as pituitary dwarfism. This is most common in German Shepherds, but also some Labrador Retrievers. It is an inherited disorder of growth hormone deficiency, and it will make the affected pooch always appear puppy-like.

There are five different types, or lines, of the German Shepherd breed. These are:

The Czech working line is thought to have the slowest growth rate. So, if you have a Czech German Shepherd, he might be slightly behind the average schedule. But this is something that your breeder will make you aware of.

The breeders of the European show line German Shepherd have attempted as much as they can to breed out the sloping back. Meaning that they usually have better hip scores and overall joint health.

Overall, the best way for your German Shepherd to grow is steady and consistently, according to the above information. Don’t try to overfeed him thinking it will make him stronger and more powerful. It can have a detrimental effect on his normal development and growth. The GSD is already prone to bone diseases such as hip dysplasia, so you need to be especially careful with him.

You can be sure that if your German Shepherd shows any abnormal signs of growth or they are way out of the charts above, it’s time to see your vet for a checkup. But just to reiterate, slow and steady wins the German Shepherd growth race.

Why Do Dogs Pee on Tires? Reasons for This Behaviour

How to Potty Train a Pomeranian (8 Quick Steps)