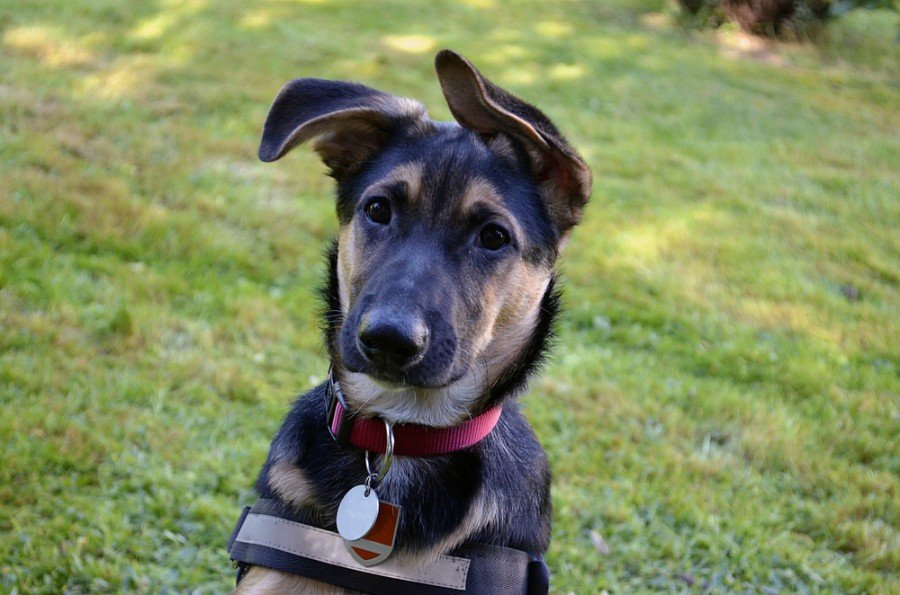 The German Sheprador is a mixed breed created by mixing the German Shepherd with the Labrador Retriever. It’s also sometimes called a Labrashepphard. It can take after either parent, but they tend to be moderate shedders with a short coat. It will have round brown eyes and a black nose.

The German Sheprador is an intelligent breed that is easy to train and is highly energetic. Your pet will require plenty of mental stimulation to be happy, and it can chew things if left alone for too long. It is alert and reserved around strangers, which makes it an excellent watchdog. It’s loyal and likes to be part of the family.

German Sheprador Puppies – Before You Bring One Home…

3 Little-Known Facts About the German Sheprador

1. They are tough dogs thanks to one of their parent breeds.

The German Shepherd parent breed is a police and military dog so the German Sheprador’s generally get their toughness from them.

2. Their parent breeds have been movie stars.

3. They could be heroes.

The Labrador Retriever parent breed is the top choice for guide and rescue, so the German Sheprador is likely to get those traits.

Temperament & Intelligence of the German Sheprador 🧠

The German Sheprador is known to be kind and affectionate. The German Shepherd in this breed will often make them reserved around strangers, and it can take time to warm up to new people, but once they have accepted you, they are extremely loyal and protective.

Both parent breeds of the German Sheprador are extremely intelligent and pass this trait on to the offspring. This breed learns commands very quickly and is suitable for search and rescue missions as well as military and police work. These dogs require plenty of mental stimulation, or they can get into trouble by chewing or digging.

The German Sheprador is a wonderful family dog that enjoys being a part of the family. This breed lives for get-togethers and family picnics, where it’s sure to get lots of attention as well as a few extra treats. They also enjoy playing with children and are careful not to injure the child and are large enough not to be hurt themselves.

German Sheprador’s get along well with other family pets after a short introductory period. Early socialization will help improve the relationship between this breed and your other pets, but it never gets aggressive. It will tend to chase after small animals that enter the yard, but even this action is more a game than an act of aggression or territorial dispute.

Things to Know When Owning a German Sheprador

Here’s a short list of things you should consider before you purchase a German Sheprador.

The German Sheprador is a medium to large size dog, so it will require a considerable amount of food each day. Most experts recommend dry kibble because it helps keep your pet’s teeth clean and provides a complete, balanced meal. When choosing your brand, choose one that has a lean meat source listed as its number one ingredient. Lean meat sources include chicken, beef, turkey, and lamb. Avoid foods with grain as the first ingredient, as well as foods that contain meat byproducts and harmful chemical preservatives like BHA.

Follow the feeding instructions on the bag closely to prevent overfeeding your pet, which can lead to obesity, and spread the food out over several meals throughout the day.

The German Sheprador is an active dog that will require about one hour of exercise each day to stay healthy and happy. They enjoy a long walk, as well as games of frisbee and fetch. Tug of war is another great way to help them expend any built-up energy, and it also helps strengthen their jaw.

German Sheprador’s are extremely easy to train and can complete complex, multi-step tasks.  This breed, as well as both parent breeds, are very eager to please their master and will quickly pick up what you are trying to show them.

One of the biggest reasons some people have trouble with training their pets is that they are not using a positive reinforcement training technique. Positive reinforcement means to shower your pet with praise as well as treats when they complete a task. Never use negative reinforcement, or look disappointed when they fail, or your dog will look for something more fun to do and will resist training sessions. Another critical component of training your dog is consistency. Always use the same positive training routine and schedule it at the same time every day. Do not waver from your schedule, or it can confuse the dog and dramatically reduce the effectiveness of your routine.

The German Sheprador requires a moderate amount of grooming, usually in the reform of daily brushing. In some cases, vacuuming your dog after brushing can also help reduce the amount of fur on your floor and furniture if they will allow it. You will also need to bathe your pet about every two months unless they get into something more frequently. You will also need to brush your pet’s teeth manually as often as possible and trim the nails as well.

Hip Dysplasia is another condition that affects larger dogs and is very common in both the German Shepherd and the Labrador Retriever. This condition causes the hip joint to form incorrectly, resulting in a misshaped joint. This joint will rub and wear down the bone over time, causing deterioration. Too much wear can reduce mobility and range of motion, resulting in slow, painful movement.

The ears on most German Sheprador’s are floppy, and floppy ears tend to retain moisture, which can result in the growth of bacteria, which can lead to an ear infection. It’s important to dry your pet’s ears well after a bath or a swim and to check them every day or two to make sure there is no moisture build-up. Allergies to food is another major cause of ear infections in dogs. If your pet is continually affected by ear infections, a change in diet might be the best solution.

Your German Sheprador can get allergies just like people do. Food is responsible for most allergies in dogs, but plants, insects, and other animals can also cause them. The most common symptom that your dog is suffering from allergies is itchy red skin. This itchy skin might stay in one area, or it can affect the entire body. Other symptoms can include coughing, sneezing, wheezing, and a runny nose. More severe symptoms can include vomiting and diarrhea. Treatment can consist of a change in diet, medication, and waiting for the season to pass.

Bloat is common in many tall deep-chested dog breeds, including the German Sheprador and both of its parents. Bloat occurs when your dog swallows to much air, usually while eating, and it causes the stomach to expand to the point of cutting off circulation to the other organs and hind legs. It can also cause the stomach to flip on itself, resulting in damage to the stomach lining.

Symptoms include a swollen stomach, drooling, inability to vomit, restlessness, and pacing. Bloat is a serious condition that comes on very quickly and can result in death, so it’s critical to get your pet to the vet immediately if you notice your pet displaying any symptoms.

The male German Sheprador is slightly heavier than the female and tends to be more territorial. The female tends to be friendlier towards their family and strangers and doesn’t mark their territory as much.

The German Sheprador is a great family dog that’s intelligent and fun to be around. Their watchful nature makes them great watchdogs, and their playful nature will help keep the children entertained. They like to be part of the family and want to be part of any family functions.

We hope that you have enjoyed reading and have decided to bring a German Sheprador into your home. If we have helped you, please share this guide to the German Sheprador on Facebook and Twitter.