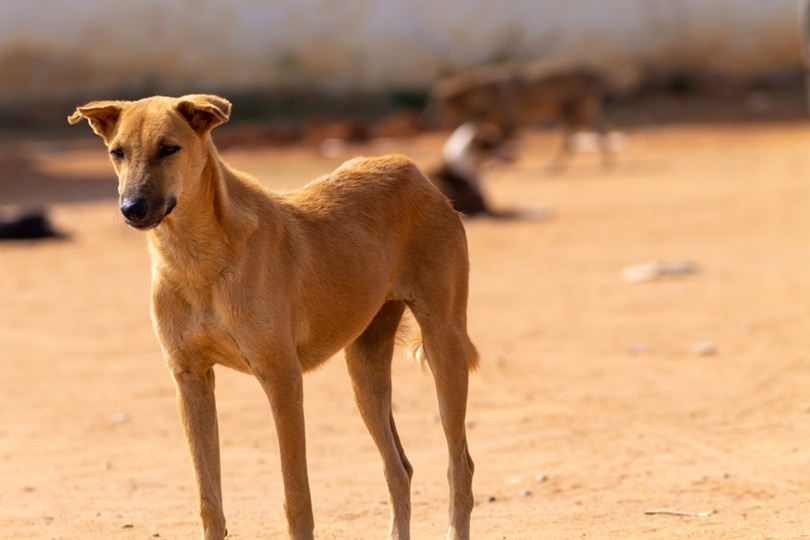 Once highly prized exotic dogs, Indian breeds have fallen out of favor over the past century and not just abroad. In India itself, Western breeds like the German Shepherd, Labrador, and even the Poodle have become far more common than dogs native to the sub-continent itself.

As a result, Indian dogs that were once found in the hundreds of thousands all over the country are starting to die out, and if nothing is done about it soon, many Indian dog breeds will be gone forever.

The first step to saving these breeds is to increase awareness. This is an exceedingly difficult task, not only because people aren’t aware of their plight, but also because most people in the West (as well as an increasing number of Indian nationals) have never even heard of many of these breeds.

What about you? How many of these Indian dog breeds do you recognize?

The Jonangi is an Indian herding and hunting dog that is native to the east coast of India and was once an exceedingly popular dog.

As a working dog, one of the main tasks for the Jonangi is duck herding, a practice that is on the decline in regional India and with it, the popularity of the Jonangi. These days, the breed is becoming increasingly rare, and these once great working dogs are believed to be near extinction.

The Vanjari Hound, also known as the Banjara Hound, is a rare Indian dog developed and used as a sighthound for hunting the Vanjari, a nomadic tribe in central-western India. Despite their purported skills in hunting, the breed is seldom seen outside the Indian state of Maharashtra.

Among those who best know the breed, the Vanjari Hound is renowned for their stamina and ability to pull down deer.

The Kanni is a South Indian sighthound that at first glance, looks remarkably like a Greyhound. The Kanni is still a popular breed in parts of India, a fact that likely relates to their ancient role as a royal hunting dog.

Kannis are sometimes also referred to as the Maiden’s Beastmaster, a term that stems from the way that the breed ferociously defends their territory from other wild animals. It is for this reason that has over the years, resulted in them being gifted to newlywed brides as their guardians.

The Gaddi Kutta is an enormous Mastiff-like breed that originates from the western Himalayan region of Northern India.

Developed as a herding dog, the Gaddi Kutta is used to herd and guard sheep and is known to have an independent and stubborn nature. Highly active and freethinking, the Gaddi Kutta does not make for a good family pet. Though loyal to their owners, the breed has a reputation for being ferocious toward strangers, and given their size and strength, they are not a dog that you’d want to cross.

Despite their fearsome reputation or perhaps because of it, the antisocial Gaddi Kutta is one of India’s most well-known dog breeds. Are you familiar with these Indian dogs?

Sometimes referred to as the Indian Terrier, the Combai is a breed that originated in the foothills of the Western Ghats in South India.

Known for their aggression and loyalty, the Combai was once an exceedingly popular guard dog used throughout many parts of India to guard livestock against tigers and leopards. Today, their aggressive tendencies have little practical use, and the breed’s waning popularity has led to their numbers falling so low that they were, until recently, on the verge of extinction.

The Rajapalayam is another Indian sighthound with a regal background.

Bred by Rajas for hunting in the Indian state of Tamil Nadu, the Rajapalayam is a ferocious hunter with exceptional speed and agility. Once revered for their hunting prowess, the Rajapalayam has fallen out of favor in India, and the breed is now nearing extinction.

Native to the Rampur region of India, the Rampur Greyhound is a descendent of early Afghan Hounds. Although originally bred for hunting, the breed is now often crossed with the English Greyhound and kept mainly as a coursing dog.

Due to their involvement in the sport of coursing, the breed is in no danger of extinction, yet outside India, they are quite rare.

Thought to be a direct descendant of the Persian Greyhound, the Caravan Hound, also known as the Mudhol Hound, is an Indian sighthound that has traditionally been used for hunting and guarding by villagers living in India’s Deccan Plateau.

Highly intelligent and easily trained, the Caravan Hound often doubled as a working dog and family pet and today, has found popularity with the Indian military, which uses the breed for border protection.

The Gull Dong is a rare hybrid breed that originated in India and Pakistan. Developed as a fighting and hunting dog, the breed is a result of crossing a Gull Terrier with a Bully Kutta and is celebrated in both India and Pakistan for its speed and tenacity.

Gull Dongs are strong, muscular dogs that have an aggressive nature. While loyal to their owners, Gull Dongs are known to be exceptionally wary of strangers and have been known to react violently with little provocation.

Because of their aggressive temperament, Gull Dongs are currently banned from all New York City Housing Authority properties and prohibited in the Cayman Islands.

The Gull Terrier is a rare dog breed that originates from the Punjab region of India and Pakistan. They are related to the Bull Terrier breeds from Great Britain, as well as to several breeds that are indigenous to the Indian subcontinent.

Originally breed for bull-baiting and dogfighting, these dogs are now mainly as guard dogs. Gull Terriers are wary of strangers yet quite affectionate and loyal to their owners. Gull Terriers are headstrong dogs, and while usually get on with children, they are not a suitable breed to be a family pet.

Indian Pariah is one of the oldest dog breeds in the world and is closely related to the Australian Dingo.

The exact history of the breed is unknown; however, they are thought to have been in India since Neolithic times. Indian Pariahs are native to the entire Indian subcontinent and can be found in almost all areas of the country.

Indian Pariahs are social dogs that can make good guard dogs and family pets if given the right training and socialization from an early age. However, in urban areas, the breed is facing increased hybridization due to interbreeding.

The Indian Spitz is a small dog with a pure white fluffy double coat and curled tail. The breed has a fox-like face with pointed ears and looks a little like a large Pomeranian or a Samoyed.

The Indian Spitz is an ideal house dog and a popular family pet in many urban areas across India. They like company but are not the sort of dog that needs to be with their owners every minute of the day, and at times, they can be a little aloof. They are easily trained and need only a moderate amount of daily exercise and grooming, making them quite easy dogs to look after.

The Bully Kutta is a strong and muscular giant breed that is also known as the Indian Mastiff or Pakistani Mastiff. First bred in the 16th century, the Bully Kutta is common in the Punjab region of both India and Pakistan, where they were originally used for hunting.

The breed is known to have an aggressive streak, and while they’re loyal and loving to their owners, they can be exceptionally wary of strangers. This trait, together with their size and strength, can make them quite dangerous dogs if they are not properly trained and socialized.

Unlike some other Indian breeds, the Bully Kutta has become increasingly popular in recent years, particularly with Indian youths who’ve come to see the dog as a symbol of bravery and masculinity.

Why Is My Dog Barking at Nothing? 4 Reasons for This Behavior & What to Do!