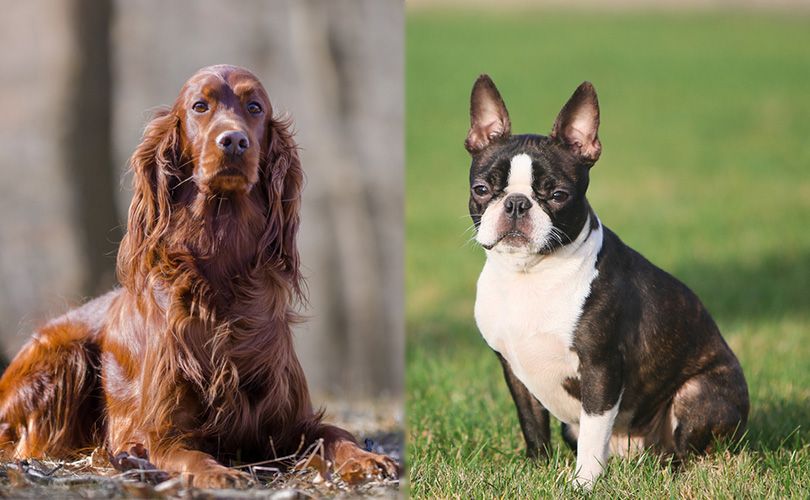 The Irish Bostetter is a hybrid breed. While less is known about this specific breed, plenty is known about both parent breeds: the Irish Setter and the Boston Terrier. What your hybrid is like will depend on which attributes he gets from each parent breed.

Irish Setters were bred as bird dogs and were very enthusiastic at the job. They would happily retrieve birds from any terrain, including on land and in water. Their stunning mahogany coat also helped with their popularity. They are friendly and inquisitive, even a little nosey, and they can be very mischievous and boisterous. The Irish Setter is a born agility competitor.

The Boston Terrier was originally bred as a fighting dog, but when the practice was outlawed, they became common as companion dogs. They make excellent family dogs and the American Gentleman will also get along with other family members, including children and dogs.

The resulting mix, the Irish Bostetter, is a friendly, playful, happy little dog. He will usually have the coloring of the Irish parent and shares a lot of the same temperaments of both parent breeds. They will be playful and do require plenty of exercises to stay fit, healthy, and happy.

Irish Bostetter Puppies – Before You Buy…

The Irish Bostetter is an unusual combination of a tall breed and a small breed. The result is a dog that can vary in size and stature, as well as its physical looks. This unusual combination also means that the resulting hybrid is quite rare and difficult to find. There is a big difference in the resulting dog, which means that puppies can look and act very differently from one litter to the next.

Prices vary from $600 to $1,200. Don’t simply opt for the cheapest dog, though. You should ensure that you buy a puppy with a good family history, that is already showing signs of being friendly and lively, and whose parents have had the proper health screening checks.

Reputable, registered breeders must get routine health and screening checks done on parent dogs. Some of these tests, especially those on the eyes, cannot be completed until the dog is two years old. If a parent dog seems too young, and a breeder is giving excuses for not having had proper checks done, it is best to look elsewhere.

Join breed groups online and in your local area. Ask at your local veterinarians and even at puppy groups and dog parks if you see other similar dogs. Determine where those dogs were acquired and speak to the breeder to see if they have any other puppies.

Always ensure that you meet the puppy before you part with any money or agree to purchase a dog. You should also be allowed to meet at least one parent. Usually, it is the mother that is available. If the mother approaches you confidently and energetically, it is a good indication that her puppy will display similar attributes.

You might find some of these dogs in shelters and pounds, especially because they tend to be more energetic and livelier than people imagine. Meet the dog, allow your children and other pets to meet them, and get as much information about the previous owner and the reason for the dog being left in the shelter as possible.

The Irish Setter has a distinctive mahogany red coat. It is considered one of the essential characteristics of the breed, and one that includes other colors may not be considered a true Irish Setter in the eyes of kennel clubs. However, this wasn’t always the case.

When the original Setters were bred, they were used as hunters. At this time, owners preferred them to be a combination of mahogany red and white. This patterning made them easier to spot when they were out in the field. However, as they became increasingly popular, especially in shows and exhibitions, the pure red color pattern was preferred.

There is something about the Irish Setter that gives them an element of grace and sophistication: at least to look at. However, when you meet one in person, it’s a different story. They are incredibly boisterous and can be rowdy. This is because the breed matures more slowly than other breeds.

While they grow physically, they do not necessarily develop emotionally and mentally, so they remain puppies for longer than other breeds. Irish Setters will eventually mature to become adult dogs, but they may retain some puppy tendencies. They are known to be quite stubborn, for example, and they will almost always retain their boundless energy. Even when they’re fast asleep on the couch, they are only a second away from a high-energy moment.

3. Boston Terriers Are Loved By Americans

The Boston Terrier was actually the first dog to officially be bred in the USA. They were created by mixing the English Bulldog with the English Terrier. They were bred by coachmen and the original dog was much larger and used for fighting, and was initially called the American Bull Terrier. Their name changed in around 1890 when the American Bull Terrier Club switched its name to the Boston Terrier Club of America.

Temperament & Intelligence of the Irish Bostetter

The Irish Bostetter is a combination of two happy and friendly breeds: both of which are energetic and smart. They can be challenging to train, but their temperament is excellent, and they will usually get along with anybody and anything. Although the breed might adapt to life in an apartment, they will benefit from living in a home with a decent sized yard, where they can get out and play and burn off some of their puppylike energy.

Usually friendly with people and all animals, the Irish Bostetter is a very lively animal that will benefit from living with owners that enjoy getting out and enjoying the fresh air. In some respects, they will do better with families that have children, because this will give them even more people that are willing to grab a toy and play or grab a leash and walk.

While the Setter can be boisterous, he is usually respectful of small children’s space, although accidents do happen. The boisterousness of the Setter is tempered somewhat by the gentler nature of the Terrier, although he is certainly no couch potato. The early time between the dog and small children should be supervised to ensure that the two get along well.

As well as being friendly with people, whether strangers or friends of the family, the Irish Bostetter is also known for being respectful and friendly with animals. They will usually want to meet and greet other dogs while walking, and they will enjoy having canine company at home, especially if family members won’t be home all day, every day. Be prepared for some rambunctious behavior, but you should not experience any aggression from the Bostetter.

Things to Know When Owning an Irish Bostetter:

The Irish Bostetter is known to be a friendly and playful dog. However, like any breed, while he might make the perfect companion for some families, he is not ideal for all potential owners. Before considering buying or adopting one of these dogs, you should consider all of the following factors to determine whether he is the right dog for you.

The Irish Bostetter is a lively and active dog that will require about an hour of walking and running a day to stay fit and healthy. He will also need the right amount of decent quality food to help maintain these activity levels so you should expect to feed around 3 cups per day. If your Bostetter is less active, feed him less, and if he is a working dog that is out in the field or hunting all day long, feed him more.

Always measure the amount of food you give, split it between two or three meals, and monitor his regular food intake to prevent him from putting on weight. Being overweight is bad for dogs, just like it is for people, and it is a lot more difficult to lose weight than to gain it in the first place.

The Bostetter is lively and active. He will enjoy an hour of exercise a day, and although this can include walks on the leash, he will benefit from more active playtime. Agility classes and other active dog sports are a good way to wear him out and ensure that he gets the amount of physical and mental exercise required.

Intelligent and clever, the Bostetter needs as much mental exercise as he does physical. He is an intelligent dog, which means that he will pick up new behaviors quite easily.

Unfortunately, this hybrid breed is stubborn as well, which means that if he doesn’t want to train or he doesn’t want to take part in a training activity, he simply won’t. This can be countered by making sure that training is fun, and try to stick to short bursts of training each day, rather than an hour upon hour of the same routine. Start training from an early age, too, and this will further help to ensure that he can be trained.

The Irish Bostetter will have shorter hair than the Irish Setter, but longer than the Terrier. It will require regular brushing, although this only needs to be weekly except when they are shedding. Bathing should be reserved for when they really need it, which is usually as a result of swimming in large puddles, rivers, or lakes.

You will also need to trim their nails approximately every month or two and brush their teeth three times a week to prevent tooth decay and other dental hygiene problems. If he will let you brush daily, then even better.

The Boston Terrier can suffer problems with his ears and face wrinkles. Check these areas regularly, wipe away any dirt and debris with a damp cloth, and clean to ensure that there is no infection.

The Irish Setter is considered a reasonably healthy breed, but the Boston Terrier is prone to some health complaints. Hybrid vigor could help prevent your Bostetter from contracting some of the diseases associated with these breeds. That being said, you should keep an eye out for the following health conditions and get veterinary help if any symptoms show.

Although the male might grow to be larger than the female, size is more often determined by the mix of breeds in this hybrid. Those dogs that have a higher percentage of Setter are likely to be bigger than those that are mostly Boston Terrier.

If you are part of a lively and active family and are looking for a companion that will not only get along with the whole family but become a major part of it, then the Bostetter is an excellent choice of dog. If you lead a sedentary life and rarely get out of the house, then you should consider a different breed.