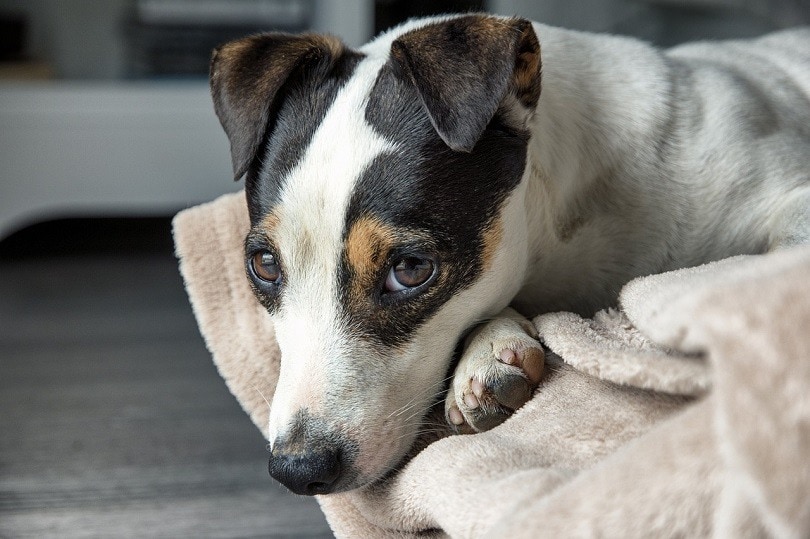 The Jack-A-Bee is a sweet and intelligent dog that is a mix of the Jack Russell Terrier and English Beagle. Coming from a line of hunters and work dogs, the Jack-A-Bee is highly active. They never turn down an outdoor romp and their sensitive noses are always smelling and investigating!

As a relatively new breed, there is not a large amount of information available about the hybrid Jack-A-Bee. However, much is known about its parent breeds.

The Parson Jack Russell Terrier is named after the Reverend John Russell (nicknamed “the Hunting Parson”), who bred a strain of terriers for hunting foxes in Devonshire, England in the mid to late 1800s.

This terrier soon became a favorite for ratting and vermin control. There are two main offshoots, one with a smaller chest and longer legs and the other having a shorter, stockier build.

Beagle-type dogs have existed for centuries and the English Beagle was probably evolved from small foxhounds. But the breed as we know it today was developed in Great Britain about 150 years ago.

Beagles are still kept for hunting purposes, although they also make an affectionate and playful pet. They are prized for a keen sense of smell and determined pursuit of scents.

Jack-A-Bee Puppies – Before You Buy…

What’s the Price of Jack-A-Bee Puppies?

Since most hybrids like the Jack-A-Bee come from purebred parents, they tend to be more expensive than adopting but less so than buying a purebred. Expect prices anywhere from $350-700 for a Jack-A-Bee pup.

1. They need more than 10 miles of exercise a week.

Don’t be fooled by the small package – these little dogs have a stupendous amount of energy. You’ll want to walk them about 11 miles a week and allow for plenty of additional outdoor playtime.

Both the parent breeds of the Jack-A-Bee are hardworking dogs. Training and activity are essential parts of maintaining their mental wellbeing, as Jack Russells, in particular, are known to grow neurotic without a job to do. Scent training, agility courses, or games will go a long way in keeping a Jack-A-Bee happy.

3. They have not been recognized by any major Kennel Club.

While both the Jack Russell Terrier and the Beagle have been recognized by the American Kennel Club and various other organizations, the Beagle Jack Russell Mix has yet to be put on any major club’s registry.

Temperament & Intelligence of the Jack-A-Bee

Like the Jack Russell Terrier from which it gets half its genes, the Jack-A-Bee is often considered a “big dog in a small dog’s body.” They are independent creatures with a curious nature and a strong work drive. Though bold and protective, they can also be rascally and excel at mischief.

Socialization and training are key, as the Jack-A-Bee’s energy and work ethic can turn to skittishness and overexcitability if not addressed. Put their smarts to work with activities, play, and plenty of exercise, and you’ll have a loyal and cheerful companion.

The Jack-A-Bee can be a wonderful family dog if you are prepared to handle their high energy and give them a certain amount of independence. With their boundless energy and curiosity, the Beagle Jack Russell Mix does best in a family setting where they can take part in activities and play with everyone.

They are naturally friendly and if socialized they can be great with kids. Don’t forget to socialize children with them, too, since their small size can make them easier to bully. But with some attention and mutual respect, you couldn’t ask for a better adventuring pal for a child than a Jack-A-Bee.

If properly socialized, the Jack-A-Bee can get along perfectly well with dogs and cats. Early socialization is key to curb any of the Jack-A-Bees tendency to nip or chase. Supervision, training, and socializing of all the animals involved will go a long way to facilitating a peaceful household.

Due to their breeding as hunters and ratters, Beagle Jack Russell Mixes should never be trusted around small animals like rabbits, guinea pigs, and chickens. There are rare occasions of Jack-A-Bees making friends with prey animals, but they are exceptions that you should not attempt to reproduce.

Things to Know When Owning a Jack-A-Bee

Welcoming a new dog into your life is a big decision. Here we’ve gathered some consideration for prospective Jack-A-Bee parents, and highly recommend reading through these things to know before diving in.

A healthy, well-balanced diet is the key to a long and happy life for your dog. The hardworking Jack-A-Bee does well on a diet rich in protein and fatty acids like omega-3. But don’t forget that dogs are omnivores who also need carbohydrates, fiber, and vitamins and minerals.

We recommend feeding your Beagle Jack Russell Mix a base of high quality, nutritionally balanced kibble. Also, many Jack-A-Bee owners find that adding a small variety of fruits and vegetables is met with interest and welcome by their inquisitive canines. Check with your vet about the appropriate diet and proportion sizes.

And while Jack-A-Bees are very active you still need to keep an eye on their weight. The parent breeds are both somewhat prone to degenerative joint diseases and arthritis and being overweight will only quicken the onset of and exacerbate those problems.

Due to their immense intelligence, strong work ethic, and vast amounts of energy the Jack-A-Bee needs plenty of mental and physical stimulation to stay healthy and happy. They do not do well in apartments, and we recommend big backyards or a rural setting for these spirited

Be prepared to exercise them multiple times a day. Eleven miles a week or more of walking and running are recommended… and don’t be surprised if your Beagle Jack Russell Mix is running circles around you long after you’re tired and ready to take a nap!

Being a smart and industrious dog means that Jack-A-Bees are often easy and eager to train. Utilize a positive rewards system, food incentives, and plenty of patience. Their keen noses lead can to a lot of distractions, so consider conducting training sessions in less stimulating environments.

Training a strong and reliable recall is very important. Beagles are escape artists and known to follow scents without a second thought, and both parent breeds have high prey drives. Be cautious of where you let these little explorers off-leash – you never know when they’ll catch wind or sight of something impossible to resist!

Since your furry friend will love having activities to do with their family, consider such exercises as scent training or agility courses. You’ll strengthen your bond with each other and run out some of the Jack-A-Bee’s considerable energy at the same time.

Jack-A-Bees are a hypoallergenic dog, but that does not mean they do not shed. Their coats fall into the short to medium range and require little attention beyond a weekly brushing and the occasional bath.

As with any canine, they require regular checkups and dental cleanings. And their floppy ears will need to be checked and cleaned from time to time to prevent build up and infections.

Special attention should be paid to the Jack-A-Bees eye health, as both Jack Russell Terriers and Beagles are predisposed to several eye conditions.

As many know, purebred dogs have a much higher likelihood of mutations and genetic diseases. Crossbreeds are often healthier than their purebred counterparts, and that is true of the Jack-A-Bee. Though generally healthy, being from purebred parents means that there are a few health issues to look out for.

Generally speaking, there is not a huge amount of difference between male and female Beagle Jack Russell Mixes. As with any dog, personality is a case by case basis with training and socialization playing a big role.

Though the Jack-A-Bee may not be a well-known breed yet, they could be the perfect companion for an active family or individual. Their work-oriented nature means that they will adore spending time training and playing with you, and you’ll always have a partner for outdoor excursions in this inquisitive dog.

The Beagle Jack Russell Mix may be small of stature, but they are big on energy! Their boundless energy can pose a serious challenge to those with a 9 to 5 schedule, so rural locations and homes with large backyards are essential.

Jack-A-Bees require quite a bit of attention when it comes to training, socializing, and exercise. But if you can keep up with them, you’ll have a devoted and cheerful companion to share all of your adventures with.

Pomeranian vs. Yorkie: Which Dog Is Right for You?