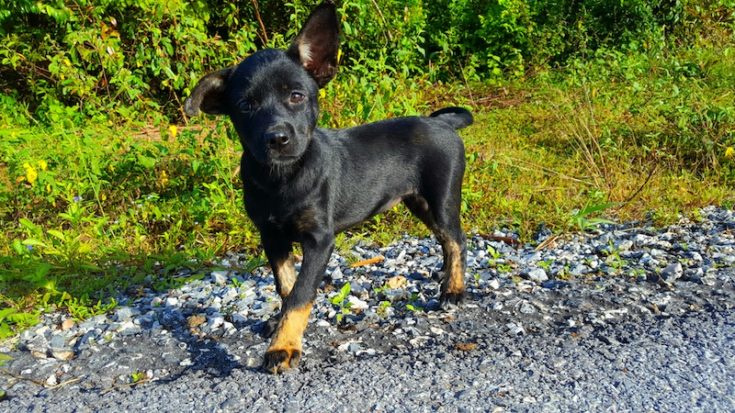 Jackweilers are the type of hybrid that will certainly raise some eyebrows, coming from two totally different size breeds. The result of a purebred Jack Russell Terrier crossed with a purebred Rottweiler, Jackweilers are considered to have the best traits of both breeds. They’re highly athletic dogs that have a keen sense of awareness, making them ideal for families looking for a great family dog. With the confidence of the Rottweiler mixed with the energy of the Jack Russell, Jackweilers are great for people who love to hike and enjoy the outdoors. Let’s take a closer look at this hybrid that is quickly gaining popularity:

Jackweiler Puppies – Before You Get One…

Jackweilers are usually first-generation hybrids, which means they come from one purebred Jack Russell Terrier and one purebred Rottweiler. Though they’re steadily increasing in popularity, Jackweilers are often the result of an “accident” than purposeful breeding.

Jackweilers come from Jack Russell Terriers, a breed known for their high energy levels. While each Jackweiler is different, many of them inherit the Jack Russell’s energy.

3. Jackweilers can be excessive barkers

Jackweilers can bark a lot, especially when they’re alerting the household of any “intruders” on the property. This is one of many reasons why these hybrids are not suitable for apartment living. Luckily, Jackweilers can be taught to stop barking if trained correctly.

Temperament & Intelligence of the Jackweiler 🧠

Jack Russell Terriers are outgoing dogs with tons of energy and very high prey drives. Originally bred for hunting, their bold personalities have retained their hunting instincts. Often considered stubborn and strong-willed, Jack Russell Terriers can be a lot to handle for inexperienced owners. However, they’re extremely loyal to their owners and tend to become overprotective.

Rottweilers are, in contrast, known for their serious personalities and lower energy levels. They’re excellent guard dogs that will stand their ground, often praised for their devotion to their families. Rotties are usually eager to learn and train, but they need a confident, sensible leader to keep them in line.

Jackweilers usually have all the best traits of both breeds, minus the somewhat aggressive tendencies that Jack Russells may have. Although there’s no guarantee of how your puppy will behave, it’s safe to say your Jackweiler will be a confident, energetic dog.

Yes, even for families with smaller children. Jackweilers are great for active families looking for a dog that has the energy to play and spend time outside. Though Jack Russells can get frustrated with children, Jackweilers are balanced out with the Rottweiler’s calmer attitude.

They can be, but it depends on the individual Jackweiler. Since Jack Russell Terriers have high prey drives, it makes them usually unsuitable for homes with other pets. Even other dogs can cause them to be territorial. However, the Rottweiler does not have these tendencies and could neutralize these issues. It’s best to keep your Jackweiler as the only pet or to raise them alongside other pets.

Things to Know When Owning a Jackweiler:

Jackweilers are medium to high energy dogs and will need lots of nutrients to keep them healthy and strong. A high-protein dry kibble diet with at least 25% crude protein is recommended. The protein sources should be animal-based, such as beef, lamb, or salmon. Since some dogs have allergies to poultry, it’s best to start with other proteins first.

Exercise is absolutely crucial for this hybrid, especially if your Jackweiler puppy has tons of energy. An hour or two of playtime plus two to three medium-distance walks is a start, but this is usually a bare minimum for this mix. They’ll need mental stimulation in addition to physical exercise, which can be hard to supply. This foraging mat can be a great mental exercise for your Jackweiler, while also slowing its eating down.

Jackweilers not only need plenty of exercise, but they need a variety. These dogs are athletic and determined, so it’s important to offer multiple ways to get their energy out. Consider taking up a canine sport like frisbee, dock diving, or agility to keep your dog in tiptop condition.

Training should start right away with your Rottweiler Terrier Mix, including socialization with people and animals. Positive reinforcement training methods with treat-based rewards are usually recommended, but the emphasis needs to be on confidence and repetition. Jackweilers need a confident leader and will resent harsher training methods.

One-on-one training is great with Jackweilers, but they can do just as well with group obedience classes. They’re highly intelligent and could easily become the top dog in the class, but they may struggle with being around other dogs. It will come down to your Jackweiler’s ability to focus and how well they do with other dogs in general.

Jackweilers have relatively short coats, so they’re easy to maintain. Although it’s not necessary, brushing their coats out once a week will help reduce shedding. These dogs shed a lot, especially in colder months. We don’t recommend bathing your Rottweiler Terrier Mix more than once a month since it can lead to dry skin. In addition to coat care, their nails will need to be trimmed at least every three weeks. If you’re not sure how to trim a dog’s nails correctly, it’s best to go to a professional groomer until you’re confident enough to do it at home.

The Jack Russell is prone to:

The Jack Russell Terrier is susceptible to:

The Rottweiler is prone to:

Jackweilers can vary in size between males and females, so this is something to keep in mind when looking for a puppy. Aside from the possible weight and height difference, the choice is a personal one to be made with you and your family. When in doubt, ask the breeder for more information on each Rottweiler Terrier Mix puppy before you decide.

Jackweilers may sound like a strange mix, but they’ve got the potential to be great family pets. They’re devoted to their families and will naturally take up the job as the family watchdog, which they take quite seriously. Though the Jackweiler may be energetic, these courageous hybrids are affectionate and enjoy being with the family. If you have the time and space for a medium-large dog with tons of energy, the Jackweiler can easily become your new favorite designer dog breed.